Landslides cause serious damage to society, and some occur as reactivations of old landslides in response to earthquakes and/or rainfall. Landslide distributions are therefore useful when siting engineering projects such as road and tunnel constructions. Although several methods have been proposed to extract landslides from topographic data on the basis of their morphological features (crown, main scarp, and main body), such morphological features are gradually eroded by heavy precipitation or landslide recurrence. Therefore, conventional methods cannot always identify areas influenced by recurrent landslides. In this study, we investigated the relationship between ridgeline continuity and landslide distribution using AW3D30, which is a global digital surface model (DSM) dataset produced from the Panchromatic Remote-sensing Instrument for Stereo Mapping (PRISM) onboard the Advanced Land Observing Satellite (ALOS) launched by the Japan Aerospace Exploration Agency (JAXA) in 2013. The relationship between the area of landslides and the number of ridge pixels was analyzed, and we propose a method for estimating the upper bound distribution of landslide topographies based on extracted ridgelines data using the Data Envelopment Analysis (DEA) function on the R statistical software packages. The upper bound on the area of landslides decreases as the number of ridge pixels increases. The same trend was seen in all the five sites, and the upper bound derived from one site is hardly exceeded by those derived from all other sites. By using the upper bound distribution function, the landslide distribution will not be missed. View Full-Text
Keywords: landslide; AW3D30; openness; ridgelines landslide; AW3D30; openness; ridgelines
►▼ Show Figures 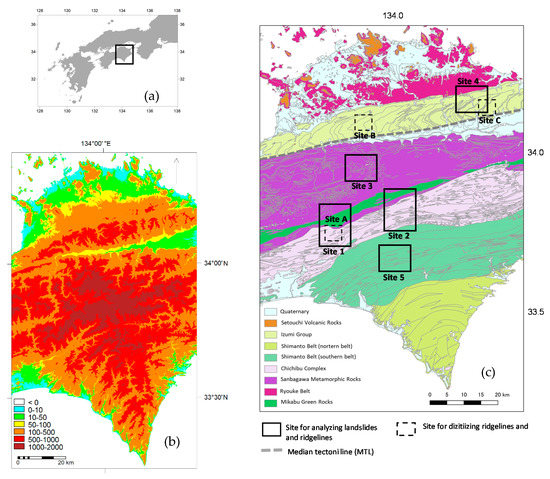