The Undrained Behaviour of an Air-Fall Volcanic Ash

A Note on “Metal Distribution and Short-Time Variability in Recent Sediments from the Ganges River towards the Bay of Bengal (India)” by Bonnail et al. (2019)

A careful reading of Bonnail et al. (2019)’s work points out some issues in the description of the Ganges River, e.g., describing it in a way that gives impression to the readers unfamiliar with the Indian rivers that it flows by the national capital New Delhi, after reading “it receives inputs from highly populated cities of India, including New Delhi and …”. However, as a matter of fact, it is not the Ganges, but the Yamuna River, a tributary of the Ganges, that passes through the National Capital Region of Delhi. Moreover, authors identify the studied river as the Ganges, whereas it is one of the distributaries of the Ganges called Hooghly (anglicized version of its local name Hugli). They have referred to the seasonality of the studied river; however, the flow of the studied (Hooghly) river is controlled by a barrage on the Ganges River. Moreover, Hooghly River receives input from its own tributaries; viz., Mayurakshi and Damodar, flowing through highly mineralized and coaliferous areas of Jharkhand state of India. Bonnail et al. (2019) have attributed the contamination of the river sediments to anthropogenic activities alone, by not evaluating likely natural sources. A correction factor for the underestimated total organic carbon (TOC) content obtained using Walkley-Black method should have been applied before using TOC values for factor analysis to overcome the underestimation issue with this method. This work intends to serve as a compendium, rather than a critique, to otherwise commendable work by Bonnail et al. (2019). View Full-Text
Keywords: Ganges; Hooghly; Hugli; river contamination; Total Organic Carbon; TOC Ganges; Hooghly; Hugli; river contamination; Total Organic Carbon; TOC
►▼ Show Figures 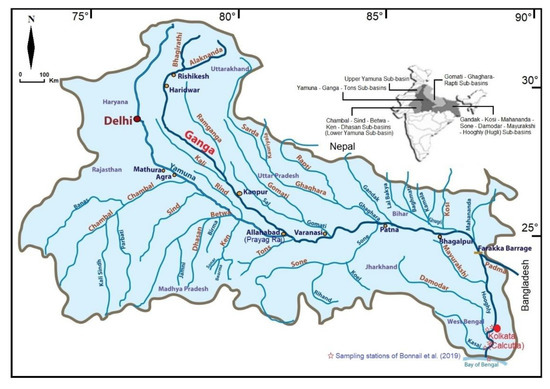