Beta-glucan is currently under consideration as an alternative to in-feed antibiotics for the sustainable pig production industry in China. Modulating intestinal function by β-glucan treatment in young pigs is one potential way of decreasing disease susceptibility and presumably increasing growth performance. In the present study, as a newly developed commercial product, β-glucans have proved to modulate gut function, and have improved growth performance in lipopolysaccharide (LPS)-challenged piglets. The present study aimed to determine the mechanisms involved inβ-glucan of low and high molecular weight mediated growth alterations in weaned piglets. The results confirmed that β-glucans isolated from Agrobacterium sp. ZX09 could improve growth performance in weaned piglets and they showed intestinal modulatory properties via different mechanisms in regulating the mucosal barrier function and microbial populations between two different molecular weight β-glucans.

This study investigated β-glucan derived from Agrobacterium sp. ZX09 with high (2000 kDa) and low (300 kDa) molecular weight (MW) to compare their effects on growth performance and gut function in LPS-induced weaned piglets. Changes in jejunal morphology, mucosal barrier function, microbial populations, and fermentation in the piglets were determined. Data showed that β-glucan prevented body weight loss in LPS challenged piglets. Supplementation with both β-glucan fractions improved jejunal morphology. Compared to low MW, β-glucan of high MW generally up-regulated transcripts of ZO-1, MUC1, and MUC2 in jejunal mucosa to a lesser extent. Mucosal D-lactate, diamine oxidase, and anti-oxidation index were effectively resumed in β-glucan treatment. Both β-glucan diets provoked the emergence of a balanced microbiota and a richer concentration of volatile fatty acids in the colon. The richest community of bifidobacterium and concentration of butyrate emerged after feeding β-glucan with high MW. Results suggested that the effect of Agrobacterium sp. ZX09 β-glucans on the gut-modulatory function is largely linked to their MW. Low MW β-glucan mainly improved the mucosal barrier function in the jejunum, while high MW β-glucan had profound effects on the microbial community and fermentation in the hindgut of piglets. View Full-Text
Keywords: β-glucan; barrier function; microbiota; piglets β-glucan; barrier function; microbiota; piglets
►▼ Show Figures 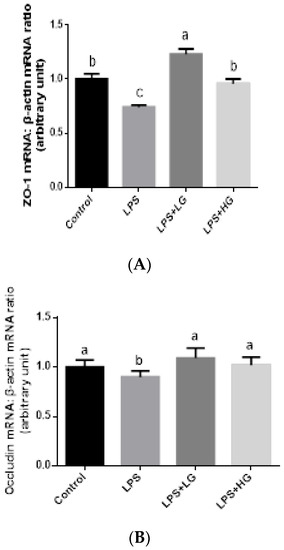