A Retrospective Analysis of Complaints to RSPCA Queensland, Australia, about Dog Welfare

The agro-industrial by-products from the pomegranate juice industry are rich in bioactive compounds. The inclusion of such by-products in the diet of lactating ruminants could improve the health benefits of milk and its technological properties, such as the cheese-making, especially in certain conditions. For example, during late lactation when the quality of milk naturally declines or during the dry season when the availability of good-quality pasture is limited. In addition, recycling agro-industrial by-products that are not edible by humans as an ingredient of the animal diet could reduce the feed costs and the feed-to-food competition in livestock production.

Pomegranate pulp, a by-product of the pomegranate juice industry, contains a remarkable quantity of bioactive compounds that can favorably affect ruminant metabolism and milk quality. The present paper investigated the effect of dietary pomegranate pulp on milk yield and quality during late lactation in grazing ewes. Twenty Comisana ewes (150 ± 10 days in milk) were subdivided into control (CTRL) and pomegranate (PP) groups. The CTRL group received a corn-barley based concentrate, while the PP group received a concentrate containing 64.8% pomegranate pulp. Dietary treatment did not affect milk yield. CTRL milk had a greater percentage of β-casein and total casein, while αs1-casein percentage tended to be greater in the PP group. The PP milk showed a lower percentage of 14:0, 16:0, but a greater percentage of vaccenic, rumenic, and α-linolenic acid. Punicic acid was detected only in the PP milk. Total antioxidant capacity (ORAC) was greater in the CTRL milk as compared with the hydrophilic ORAC. Dietary pomegranate pulp increased milk health quality with no detrimental effects on milk yield. Therefore, pomegranate pulp could represent a strategy for improving milk quality and reducing feeding cost during a less profitable phases such as late lactation. Also, dietary pomegranate pulp, as an alternative to traditional feedstuffs, may lower feed-to-food competition in livestock production. View Full-Text
Keywords: milk; fatty acids; antioxidant capacity; pomegranate; late lactation milk; fatty acids; antioxidant capacity; pomegranate; late lactation
►▼ Show Figures 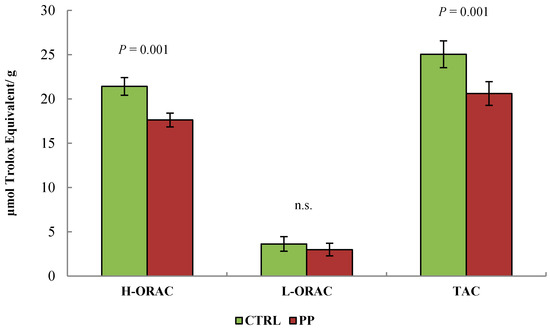