Working farm dogs may be at more risk of infection with gastrointestinal parasites than pet dogs, as they are fed raw meat and are in close contact with other dogs. This study determined the percentage of working farm dogs in New Zealand shedding intestinal parasite stages in their feces and explored what factors might increase or decrease the chance of parasites being in a dog’s feces. One person collected information about the dogs and their management using a questionnaire, body condition scored each dog, and collected a fecal sample to test for parasites. The study found that four out of ten dogs had one or more types of gastrointestinal parasites present in their feces, and this was more common in younger dogs. There was no association between the presence of parasites in feces and frequency that owners reported giving dogs anthelmintic drugs. The high percentage of dogs with parasite lifecycle stages present in their feces is of concern for the health of the dogs and also the owners as some parasites are zoonotic.

Working farm dogs in New Zealand may have a high parasitic challenge because of access to raw meat and close contact with other dogs. This cross-sectional study aimed to estimate the percentage of dogs with gastrointestinal nematode and protozoan parasite lifecycle stages present in their feces and to identify factors associated with the presence of parasites. A single researcher collected information about the dogs and their management via a questionnaire, body condition scored (BCS) the dogs, and collected fecal samples to determine the parasite burden. Fecal samples were collected from 171 dogs and 40% (95% CI 33.0% to 47.7%) contained parasite ova or (oo)cysts. There was no association between BCS and the presence of nematodes and parasites (p = 0.74) in the feces. The percentage of dogs with parasites present in their feces was not associated with BCS or the frequency with which anthelmintic drugs were reportedly administered (p = 0.61). The high percentage of dogs with parasites are of concern for the health of the dogs and their owners, given the zoonotic potential of some parasites. Further, research should also focus on understanding why reporting giving anthelmintic drugs at least every three months did not eliminate the infection. View Full-Text
Keywords: working farm dogs; herding dogs; parasites; Toxocara canis; Sarcocystis; husbandry working farm dogs; herding dogs; parasites; Toxocara canis; Sarcocystis; husbandry
►▼ Show Figures 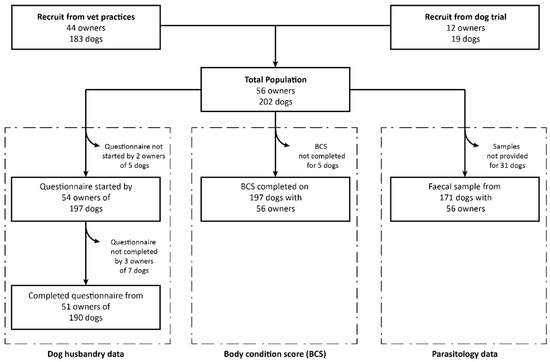