Effect of Oxytocin, Cloprostenol or Buserelin in Semen Doses on Sow Fertility
Next Article in Special Issue

Assessing Risks to Wildlife from Free-Roaming Hybrid Cats: The Proposed Introduction of Pet Savannah Cats to Australia as a Case Study
Previous Article in Journal

Can Responsible Ownership Practices Influence Hunting Behavior of Owned Cats?: Results from a Survey of Cat Owners in Chile

Cats are popular pets, with increases in both the number of households that have cats and the number of cats per household. Cats can also have great negative impacts on wildlife. In Chile, the potential influence of owned cats on wildlife has not been studied, which is why the aim of this study was to investigate the number and type of prey that cats bring home and its relationship with responsible ownership practices. For this, we sent a questionnaire to pet owners across the country. The survey included questions about the type of household and pets, if cats had brought prey back home, and responsible ownership practices. The results showed that from 5216 respondents, 94.3% had a pet; from these, 49.9% had at least one cat. There were on average 2.2 cats per household, and 84.1% of owners reported that their cats had brought back prey. Birds and mammals were the most common type of prey, followed by insects. The lack of responsible ownership practices such as not being registered, not having a litter box, having free access to the outdoors, or living in a house with a garden and providing a hiding place increased the probability of cats bringing back home prey.

The domestic cat (Felis catus) has become a worldwide threat to wildlife. The potential impact of owned cats on wildlife in Chile has not been documented at a large scale. The purpose of this study was to investigate the number and type of prey that owned cats bring back in Chile and its relation with responsible ownership practices. An online survey was distributed to 5216 households that included questions about the type of pet, responsible ownership practices, and in the case of cats, the type of prey they brought home. Descriptive statistics as well as univariate and multivariate logistic regression analysis were applied. The results showed that 94.3% of respondents had a pet, and from these, 49.9% had at least one cat. A total of 84.1% of owners reported that their cats had brought back prey. Birds were the most common type of prey, followed by mammals and insects. Not being registered with a microchip, not having a litter box, living in a house with access to a garden, not having a hiding place for the cats, and having free access to the outdoors significantly increased the odds of cats bringing back prey. Body condition score or providing ad libitum food to cats did not have an effect on bringing prey. View Full-Text
Keywords: owned cat; responsible ownership; wildlife; prey; Felis catus; hunting behavior owned cat; responsible ownership; wildlife; prey; Felis catus; hunting behavior
►▼ Show Figures 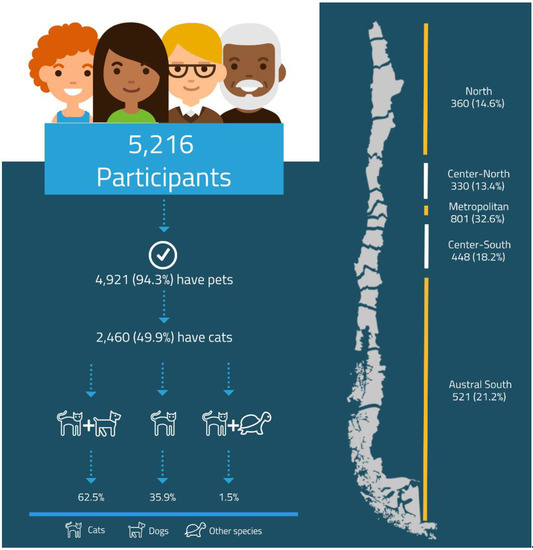 
Escobar-Aguirre, Sebastián, Raúl A. Alegría-Morán, Javiera Calderón-Amor, and Tamara A. Tadich 2019. "Can Responsible Ownership Practices Influence Hunting Behavior of Owned Cats?: Results from a Survey of Cat Owners in Chile" Animals 9, no. 10: 745. https://doi.org/10.3390/ani9100745