Influence of Progesterone-Treatment Length and eCG Administration on Appearance of Estrous Behavior, Ovulatory Success and Fertility in Sheep
Next Article in Special Issue

Feeding Strategies Before and at Mixing: The Effect on Sow Aggression and Behavior
Previous Article in Journal

In most intensive pig production systems, pigs are often mixed into new groups. Sows are important to a production system, as they are the driver behind the farms’ productivity. The aggression that results from sows being mixed into new groups and formation of hierarchy can detrimentally affect production and welfare. This study aimed to determine the effect of providing access to materials on aggressive and play behaviors in gestating sows. Play behaviors were observed in the ‘enhanced’ pen and no play was observed in standard housing (without materials present). Aggression measures, salivary free cortisol concentrations, and injury counts were unaffected by treatment. The provision of point-source materials to sows at mixing had no impact on aggression; however, their presence maintained sow interest over the course of the experiment. Additionally, play behavior was observed in their presence, which may suggest that a more positive affect was induced when the materials were provided. 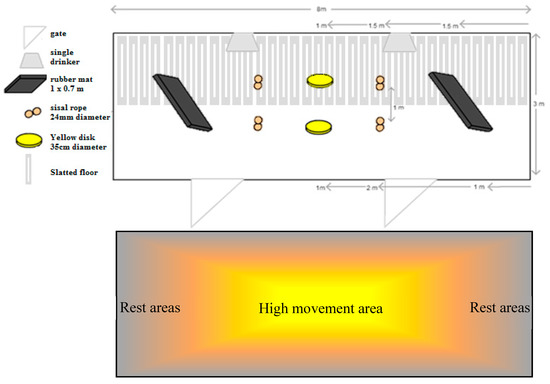