Dog Theft: A Case for Tougher Sentencing Legislation
Next Article in Special Issue

In Australia, management of the unowned urban cat population is a continuing challenge. This is because the numbers of cats culled in trap-and-kill programs are inadequate to balance the breeding rate of the remaining cats, and also because of immigration of sexually active cats from surrounding areas in a “vacuum” effect into areas where culling has been applied. In contrast, programs based on management of cat reproduction, such as trap-neuter-return (TNR), supplemented by rehoming of socializable cats and kittens, have been shown to produce significant reductions in free-living cat populations. However, evidence is lacking that these approaches are effective in an Australian context. In this paper, we document a nine-year TNR program on an Australian university campus, supplemented by rehoming, that reduced a free-living cat population from 69 to 15 cats, while also rehoming 19 campus-born kittens and managing a further 34 immigrant cats that either joined the resident colony (n = 16), were rehomed (n = 15), or died/disappeared (n = 3). Subsequent institutional support for the program was strong because of a reduction in complaints from campus staff and students, the minimal institutional costs, and the improved health status of the remaining cats, all of which are desexed, microchipped, registered and fed on a daily basis.

In August 2008, the University of New South Wales (UNSW) in Sydney, Australia, commenced a trap-neuter-return (TNR) program to manage the population of approximately 69 free-roaming unowned urban cats on its Kensington campus. The goals of the program included an ongoing audit of cats on campus, stabilization of cat numbers through TNR, and a subsequent reduction in cat numbers over time while maintaining the health of remaining campus cats. Continuation of the TNR program over nine years resulted in a current population, as of September 2017, of 15 cats, all desexed (78% reduction). Regular monitoring of the cats through a daily feeding program identified a further 34 cats that immigrated on to campus since initiation of the program; these comprised 28 adult cats (16 unsocialized, 12 socialized) and six solitary kittens. In addition, 19 kittens were born on campus, 14 of which were born to immigrant pregnant females. Unsocialized adult immigrants were absorbed into the resident campus population. Where possible, socialized adult immigrants, solitary kittens, and campus-born kittens were removed from campus through rehoming. Overall, reasons for reductions in the cat population (original residents, immigrants, campus-born kittens; n = 122) included rehoming or return to owner (30%), death/euthanasia (30%) and disappearance (29%). This successful animal management program received some initial funding from the university to support desexing, but was subsequently funded through donations, and continues with the university’s approval and support. View Full-Text
Keywords: unowned urban cat; cat management; trap-neuter-return; TNR unowned urban cat; cat management; trap-neuter-return; TNR
►▼ Show Figures 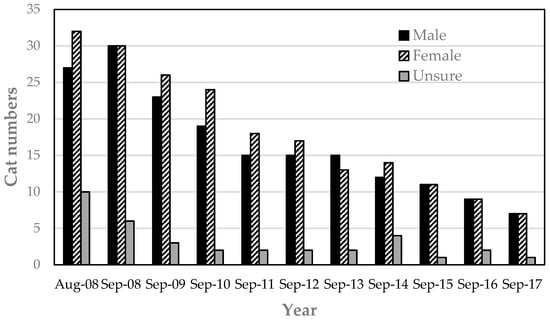 Swarbrick, H.; Rand, J. Application of a Protocol Based on Trap-Neuter-Return (TNR) to Manage Unowned Urban Cats on an Australian University Campus. Animals 2018, 8, 77.


Swarbrick H, Rand J. Application of a Protocol Based on Trap-Neuter-Return (TNR) to Manage Unowned Urban Cats on an Australian University Campus. Animals. 2018; 8(5):77.


Swarbrick, Helen; Rand, Jacquie. 2018. "Application of a Protocol Based on Trap-Neuter-Return (TNR) to Manage Unowned Urban Cats on an Australian University Campus." Animals 8, no. 5: 77.