Of Fur, Feather, and Fin: Human’s Use and Concern for Non-Human Species

The Need for Formal Evidence Synthesis in Food Policy: A Case Study of Willingness-to-Pay

Evidence synthesis methods, such as systematic reviews and meta-analyses, are being more frequently adopted in the study of consumer behaviour for a number of reasons. These include increases in the volume of information, the increased focus on research which delivers the basis for evidence-based policy and practice, and the need to assess and present the totality of evidence in relation to a given topic to all stakeholders concerned [1,2,3]. This synthesis of results is especially important as most individual studies are not large enough, or are too contextual, to identify trends or enable generalisations to be made [4,5], particularly in the context of applied social science research. Additionally meta-analysis provides increased power for analysis, a formal means of exploring heterogeneity, critical appraisal to inform future research and formalised sensitivity analysis, whereby sensitivity analysis is a repeat of the meta-analysis using an alternative set of studies or processes for aspects that were deemed unclear, so as to provide an indication of the robustness of the results. e.g., for studies whose eligibility was unclear [6,7]. These methods have had transformative effects in other disciplines, such as medicine, social reform, and education, yet systematic review and meta-analysis in topics related to food policy remain insufficient and are normally only done in part.
In addition to providing robust and transparent forms of evidence synthesis, meta-analysis has the added advantage of identifying additional weaknesses in the evidence base, such as publication bias. This has, in the social sciences, been defined as “the tendency toward preparation, submission and publication of research findings based on the nature and direction of the research results” [8], and is when the publically-available literature is not fully representative of all of the completed studies of a given topic of interest [9]. Failure to publish results could occur for a number of reasons [10,11]. These include researchers failing to write up non-significant or negative results (i.e., the “file drawer” problem) [12], or such results being peer reviewed less favourably with editors being less likely to publish results which do not support existing findings [6]. Conversely, studies with statistically significant and supportive outcomes are more likely to be published [13], with the same piece of work likely to be published on multiple occasions [14]. This failure to obtain a true representative sample of all those addressing a specific topic can threaten the validity of the meta-analysis [15,16,17], and can lead to the formation of unreliable conclusions [18,19], including a distorting effect on cumulative knowledge and evidence-based practice. It is important to note that this is not a failure of the search process to locate a representative sample of studies [20], but rather a problem with the availability of the literature in the first instance due to non-publication.
Publication bias is a widely acknowledged problem [21]. Despite the majority of evidence coming from the health sciences [20], there is also evidence of a growing body of evidence in the social science literature [22], for example, in economics [17,19] and psychology [23]. However, publication bias is rarely tested for in meta-analyses within economics [24,25], nor the wider consumer behaviour literature [26,27,28]. Where it has been explored, recommended tests [6] have often not been used [29], and publication bias has been missed when tested [30]. It is important to conduct a formal assessment of publication bias so as to provide an indication as to the robustness of the results [9] and the strength of evidence of the conclusions made.
Willingness-to-pay (WTP) is defined as the maximum price an individual is willing to sacrifice to obtain a certain benefit or to avoid an issue, event, or loss [31], and can be taken as a measure of value of goods or services to an individual [32]. It is especially useful for evaluating non-market goods [33] and is a widely used tool as part of cost-benefit analysis in policy-making. However, a number of criticisms of WTP exist. These include the assumption that individuals are the best judge of their own wellbeing [33], that there is no common unit, scale, or monetary values to assess the value of ethical issues and values associated with welfare or the environment [34], and that WTP estimates are influenced by the wealth of the individual providing them. A number of types of bias exist in WTP studies, including hypothetical bias [33], non-response bias [35], and information bias [33]. There are also the advantages and disadvantages of the individual methods, themselves, which are partially attributed to different types of bias [36].
The majority of these criticisms of the WTP method are well known [33] and are commonly taken into consideration. However, publication bias still continues to receive relatively little attention. This paper, therefore, aims to explore publication bias in the WTP literature. This will be conducted using the example of WTP for improved farm animal welfare (FAW).

The 54 studies included in the final analysis provided 335 measures of WTP, with studies on average providing six WTP measures. Seventeen of these studies (31.5%) failed to provide variances for their WTP estimates, leading to their measures being imputed. These will be referred to as imputed values, with studies that did provide variances referred to as complete case values. Average effect sizes for each study were calculated and these will be referred to as aggregated values. The majority of studies (n = 47) were peer reviewed journal articles, with the remaining seven being a mixture of reports, theses, and conference papers. The results for all tests of publication bias are presented for the complete case (n = 227), overall (n = 335, complete case and imputed values), and aggregated values (n = 54), respectively. The average effect sizes were calculated for each analysis as the standardised mean difference (mean WTP divided by the corresponding variance) and are as follows: complete case analysis (I2 99.71%, effect size 0.6302 (95% CI 0.5016, 0.7587), significance p < 0.0001), overall data analysis (99.76%, 0.5709 (0.4599, 0.6819), p < 0.0001), and aggregated value analysis (99.72%, 0.6135 (0.4106, 0.8524), p < 0.0001). Effect sizes for each analysis were reasonably consistent with one another and all indicated that the public are WTP a small price premium for products produced with higher than minimum animal welfare standards, e.g., free-range eggs, compared to barn eggs. Full analysis and discussion of the results can be obtained by contacting the corresponding author. Results from the assessments of publication bias are presented below and are summarised in Table 1 and Table 2.
The contour-enhanced funnel plots for each sample are displayed in Figure 2, Figure 3 and Figure 4 and, as expected, the larger studies show less variation in their effect size estimates compared the smaller studies. The results of the contour-enhanced funnel plots for the complete case, overall, and aggregated values demonstrate asymmetry indicating that publication bias is present in the results. The contours on the plots indicate that asymmetry occurs on the left hand side of the plot, indicating studies with smaller than average effect sizes are missing. These missing studies on both sides appear to be in the area of significance at the 5% level and below to the left of the average effect size. In addition, there appear to be few small studies with non-significant results, as indicated by the lack of studies in the white region in the centre of the funnels.
The results of the Egger’s test are significant for the complete case values only (z = 3.7300, p = 0.0002), leading to rejection of our null hypothesis (H0 = there is no asymmetry) and indicating asymmetry in the data, consistent with the suspected publication bias from the funnel plots. Although asymmetry is detected in the Egger’s test for the overall values (z = 1.2310, p = 0.2183) this was not statistically significant. For the aggregated data the negative z value (z = −0.5939, p = 0.5526) supports the findings from the contour enhanced funnel plots that studies from the right-hand side of the funnel plot appear to be missing.
Results of the rank test lead to the rejection of the null hypothesis, indicating that publication bias in present in all datasets. This was significant at the 0.1% level for the complete case (0.3103, p = 0.0001) and overall values (0.2594, p < 0.0001), and at the 5% level for the aggregated values (0.1944, p = 0.0392). The correlation was weakest for the aggregated dataset, which may be a reflection of the smaller number of values in this dataset, and also the studies missing from the right-hand side, as indicated from both the funnel plot and the Egger’s test.
The Vevea and Hedges test again confirmed that publication bias was present in the data, with there being statistically significant differences between the unadjusted and adjusted WTP estimates for the complete case χ2 (1) = 60.51, p < 0.0001, overall χ2 (1) = 81.28, p = 0.000) and aggregated values χ2 (1) = 10.03, p = 0.0015) as highlighted in Table 2. The significant results indicate the adjusted models fit the data better [50]. For both the complete case and the overall values, the adjusted values are lower than the initial estimates, with values becoming negative following adjustment, changing from 0.63 to −0.23 and from 0.57 to −0.25, respectively. It should be noted that this negative effect size does not imply that individuals are not willing-to-pay or wish to be compensated for purchasing higher-welfare products; rather, they expect them to have additional benefits, such as being healthier or safer products, or to have been produced in a more environmentally friendly manner [51]. For the aggregated data, the opposite was true, with the effect size increasing from 0.47 to 0.96, which is unsurprising as, from the previous analyses, it would appear that positive WTP estimates will have been added to create the adjusted estimate.
Finally, the mean effect size between published and unpublished studies was compared. There was little difference between them for all datasets (Table 1), with all having overlapping confidence intervals between published and unpublished values. For both complete case and aggregated values, peer-reviewed publications deliver slightly higher values, while for the overall dataset average published values are slightly lower, which is likely due to larger standard deviations obtained through imputation (as they were not reported).
Overall, it would seem that publication bias is suspected in this example of the WTP literature, and this was consistently demonstrated across all tests, particularly for the complete case values, compared to the other two datasets where values had been imputed. For the aggregated values, publication bias is suspected across all tests, barring the Egger’s test, although the slight negative correlation would appear to support the overall finding that smaller studies with larger effect sizes appear to be missing. Few studies appear to be missing from the left-hand side of the funnel plots, although all graphs were missing studies from areas of non-significance, implying that studies with non-significant results are not being published. The results of the subgroup analysis support these findings, with the Vevea and Hedges model indicating publication bias across all subgroups, and the contour-enhanced funnel plots, Egger, and rank tests indicating publication bias for the majority of the subgroups. Readers are directed to the supplementary data file for more information. 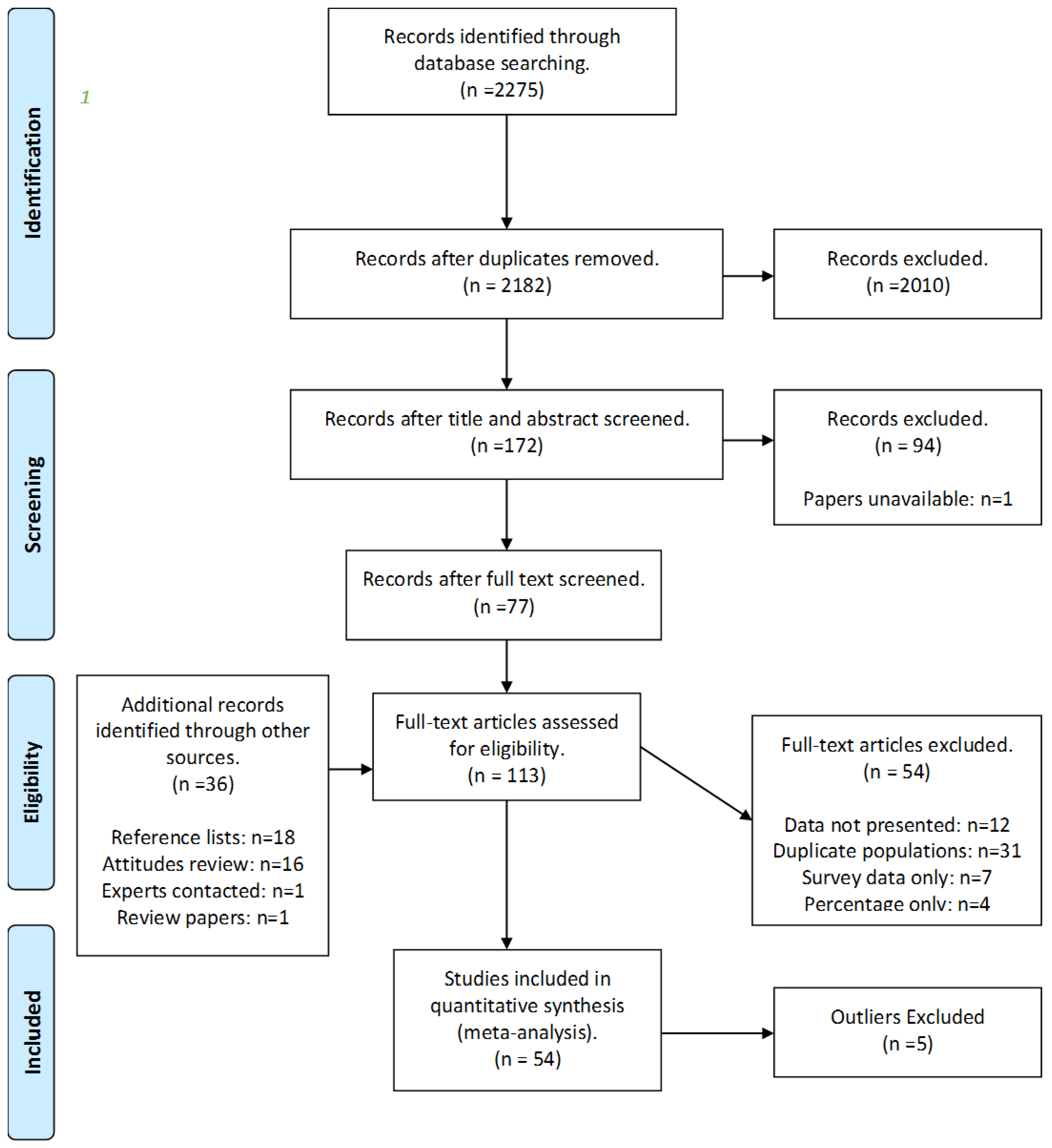 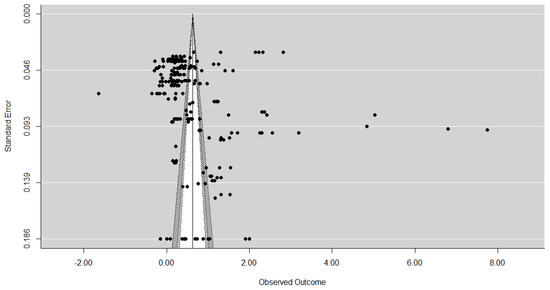 Table 2. Results from the Vevea and Hedges assessment of publication bias at the 0.05 cutpoint.
Results presented with standard error values.