Overimitation in Dogs: Is There a Link to the Quality of the Relationship with the Caregiver?

Humans, but no other primates, show overimitation: the copying of causally irrelevant or non-functional actions. Recent studies have provided evidence for overimitation in canines, but mainly when their human caregiver—not an unfamiliar person—is demonstrating the irrelevant action. Therefore, we hypothesized that dogs show overimitation as a result of affiliation. Here, we tested if the eagerness to overimitate is influenced by the relationship quality between dog and caregiver by measuring, on the one hand, their relationship and on the other hand, the overimitation tendency. Although our overall results were not significant, our data might suggest that, on average, the dogs who overimitated might also show more referential and affiliative behaviours towards the owner (like gazing, synchronization and greeting) than dogs who showed less or no copying of the irrelevant action. Possible reasons for these negative findings are discussed, together with the implications for dog owners.

Overimitation, the copying of causally irrelevant or non-functional actions, is well-known from humans but completely absent in other primates. Recent studies from our lab have provided evidence for overimitation in canines. Previously, we found that half of tested pet dogs copied their human caregiver’s irrelevant action, while only few did so when the action was demonstrated by an unfamiliar experimenter. Therefore, we hypothesized that dogs show overimitation as a result of socio-motivational grounds. To test this more specifically, here we investigated how the relationship with the caregiver influenced the eagerness to overimitate. Given the high variability in the tendency to overimitate their caregiver, we hypothesized that not only familiarity but also relationship quality influences whether dogs faithfully copy their caregiver. For this purpose, on the one hand we measured the overimitation tendency (with the same test as in the two studies before) and on the other hand the relationship quality between the dogs and their caregivers. Although we found no significant correlation between the two test results, our data might suggest that, on average, dogs who overimitated seemed to show more referential and affiliative behaviours towards the owner than dogs who showed less or no copying of the irrelevant action. Notably, as a group, those dogs that showed the highest level of copying accuracy of the irrelevant action showed the highest level of gazing and synchronization towards the owner. View Full-Text
Keywords: overimitation; dogs; affiliation; relationship; dog–human interaction overimitation; dogs; affiliation; relationship; dog–human interaction
►▼ Show Figures 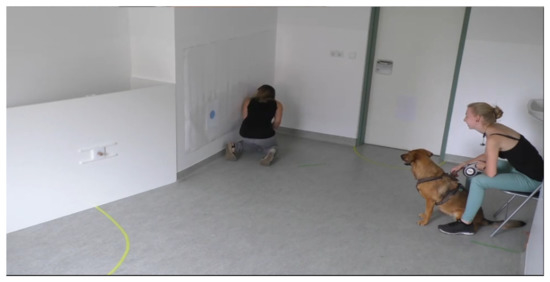