Historical documentation shows that the Spanish Merino sheep was selected over many centuries due to the quality of wool, following which it was used to originate all other Merino breeds around the world, mainly by crossbreeding with local breeds. Today, the historical genetic lines that originated the Spanish Merino are still preserved in several closed herds in which they have been bred for nearly 200 years, maintaining their original genetic purity. Our study demonstrates, using a genomic approach, the exceptional genetic richness and variability of these lines, which are clearly differentiated from modern Merino breeds, and must therefore be protected to safeguard the large genetic pool they represent.

According to historiographical documentation, the Romans first began to select Merino sheep in the Iberian Peninsula during the first century, with the aim of obtaining a breed appreciated for the quality of its wool. This process continued locally during the Middle Ages, when Spanish sheep were protected, and their export to foreign countries was banned. It was during the 16th century when individual Merino sheep were allowed to spread around the world to be used to improve the wool quality of local breeds. However, the wool crisis of the 1960s shifted the selection criteria of the Merino breed towards meat production at the expenses of wool. Consequently, individuals that display the genetic and phenotypic characteristics of those sheep originally bred in the kingdom of Spain in the Middle Ages are extremely difficult to find in commercial herds. In this study, we characterized the genetic basis of 403 individuals from the main historical Spanish Merino genetic lines (Granda, Hidalgo, Lopez-Montenegro, Maeso, Donoso and Egea), which were bred in isolation over the last 200 years, using a genomic approach based on genotyping data from the Axiom™ Ovine 50K SNP Genotyping Array. Our analysis included measuring population structure, genomic differentiation indexes, runs of homozygosity (ROH) patterns, and an analysis of molecular variance (AMOVA). The results showed large genetic differences between the historical lines, even though they belong to the same breed. In addition, ROH analysis showed differences due to increased inbreeding among the ancient generations compared with the modern Merino lines, confirming the breed’s ancestral and closed origin. However, our results also showed a high variability and richness within the Spanish historical Merino lines from a genetic viewpoint. This fact, together with their great ability to produce high-quality wool, suggests that ancestral Merino lines from Spain should be considered a valuable genetic population to be maintained as a resource for the improvement of wool-producing sheep breeds all around the world.
Keywords:
sheep; merino; genetic lines; genomic characterization; SNPs

Samples from 403 Spanish Merino sheep belonging to the Asociación Nacional de Criadores de Ganado Merino (ACME) were analyzed in this study. The first dataset analyzed (dataset I) included individuals from six historical Spanish White Merino (ME) genetic lines: Granda (GRA, n = 60), Hidalgo (HID, n = 60), López-Montenegro (LM, n = 50), Maesso (MAE, n = 57), Donoso (DON, n = 60) and Egea (EG, n = 58), which have been bred in closed farms for up to 200 years (about 70 generations) according to the existing records. In addition, 20 Spanish White Merino individuals randomly selected from commercial herds (SMEI, n = 20) were included as an undifferentiated control, and 39 Spanish Black Merino (MN) were included as outgroup control within the breed. Individuals within groups and group sizes were selected from all of the available animals on the ACME database avoiding close kinships, following the Food and Agriculture Organization of the United Nations recommendations for the genomic characterization of animal genetic resources guidelines [33]. In all cases, biological samples (whole blood) were collected using EDTA-K3 BD vacutainers™ (BD, Madrid, Spain) by ACME technicians.

To analyze the genetic differentiation of the Spanish Merino ancient lines with different Merino breeds in the rest of the world, we created a second dataset (dataset II) by merging our data with 194 genotypes obtained from public repositories [15]. The non-Spanish genotypes included Australian (AM, n = 100), French Rambouillet (RMB, n = 50), German Landschaf (MELAND, n = 21), and Chinese (CHIME, n = 23) Merinos as well as the genotypes of 24 Mouflons (Ovis gmelini, SMU) collected in a hunting state from the south of Spain as an outgroup species control.
Both datasets were first pruned by removing all of the markers showing a minor allele frequency (MAF) < 0.01 or without physical annotation. Thereafter, those SNPs in linkage disequilibrium (LD) with a variance inflation factor (VIF) of 1.25 were also removed. The final dataset included 28,765 SNPs. All data curation was performed using PLINK V2.0 program [35].

To compile a profile of the genetic population structures and their stratification, we first measured expected and observed heterozygosity using the dartR package [36] from the R statistical environment v4.1.3 [37] as well as a Principal Component Analysis using PLINK V2.0 [35]. In a further analysis, we estimated the probability of adscription of each individual to their subpopulations using a Bayesian unsupervised analysis implemented in Admixture software v1.3 [38]. The optimal K value was determined as the one having the lowest cross-validation (CV) error. Finally, a phylogenetic analysis based on the genetic distance of Hamming at individual and subpopulation levels was performed using the ape 5.5 package [39] in R. The results were visualized in radial and non-radial trees.

The existence of genetic fingerprints within the Spanish White Merino was determined by estimating the existence of genomic regions in which the run of homozygosity (ROH) abundance had significantly increased. To this, we first estimated ROH per individual using a 7-class model in the RZooROH R package [40]. Krate limits were set at 6, 12, 18, 36, 144, and 144. The mixing coefficient was set at 0.01, and genotyping error probability at 0.001. After processing, only ROH longer than 1Mb were retained for further analysis to avoid the detection of false positives due to LD [41]. In a second step, the quantitative analysis of the ROH fragments was performed using the DectectRuns package in R [42], which determined an ROH-based inbreeding value (FROH) per individual at the chromosome level, as the percentage of the bases of each respective chromosome covered by ROH [43]. In addition, we estimated the FROH values theoretically produced by a mating that occurred 3, 6, and 9 generations ago (FROH3G, FROH6G, and FROH9G) by analyzing ROH longer than 16 Mb, 8.8 Mb, and 5.5 Mb only, according to Fisher’s theory [44]. In addition, an ancestral value (FROHANC) was also estimated by analyzing ROH shorter than 5.5 Mb. Finally, an incidence p-value at the SNP level was determined using a 1,000,000-iteration permutation test following the methodology described by Goszczynski, et al. [45]

2.6. Analysis of the Molecular Variance (AMOVA)

To estimate the percentage of the variance components explained by the species, breeds, and genetic lines using genomic data, we performed an analysis of molecular variance (AMOVA, [46]). The bioinformatics workflow, developed in R, included an initial transformation of the binary genomic dataset (bed, bim, and fam) into a genind object using the radiator package [47]. Thereafter, we performed an AMOVA (poppr.amova) implemented in the Poppr R package [48]. The model (STRATA) included 3 levels of differentiation: species, breed, and line.

This is the first study to assess the genetic structure of the Spanish Merino breed and its most ancient and original genetic populations using a high-throughput genomic approach. Overall, we determined the existence of a high degree of genetic variability within the breed, as well as its influence in improving Merino breeds around the world. In addition, we demonstrated the importance of the ancestral Merino lines, which are still bred in purity in Spain, as a genetic reservoir of variability for improving the breed, as well as for conservational purposes. In addition, the existence of such rich genetic variability could provide the starting point for an association, in further studies, between the genomic variations and the phenotypes of each of these populations. This genetic richness, together with the excellent, highly sought-after aptitude of the wool, makes it essential to undertake all possible efforts aimed at preserving the different historical lines as a genetic source for the improvement of other derived Merino breeds. However, the conservation of these ancient genetic lines is also justified for historical and cultural reasons and for the different aptitudes that each of them presents, such as differences in grazing capacity, resistance to thermal stress, growth rate, meat quality, and maternal aptitudes, among others, which could be of interest soon. Therefore, it would be convenient to promote actions such as the incorporation of breeders from other herds and the creation of a germplasm bank of the best animals of each line in the Hinojosa del Duque Center (ex-situ conservation), where most of these pure lines are still bred in purity.

This research was funded by the Meragem Group (University of Cordoba, Spain). 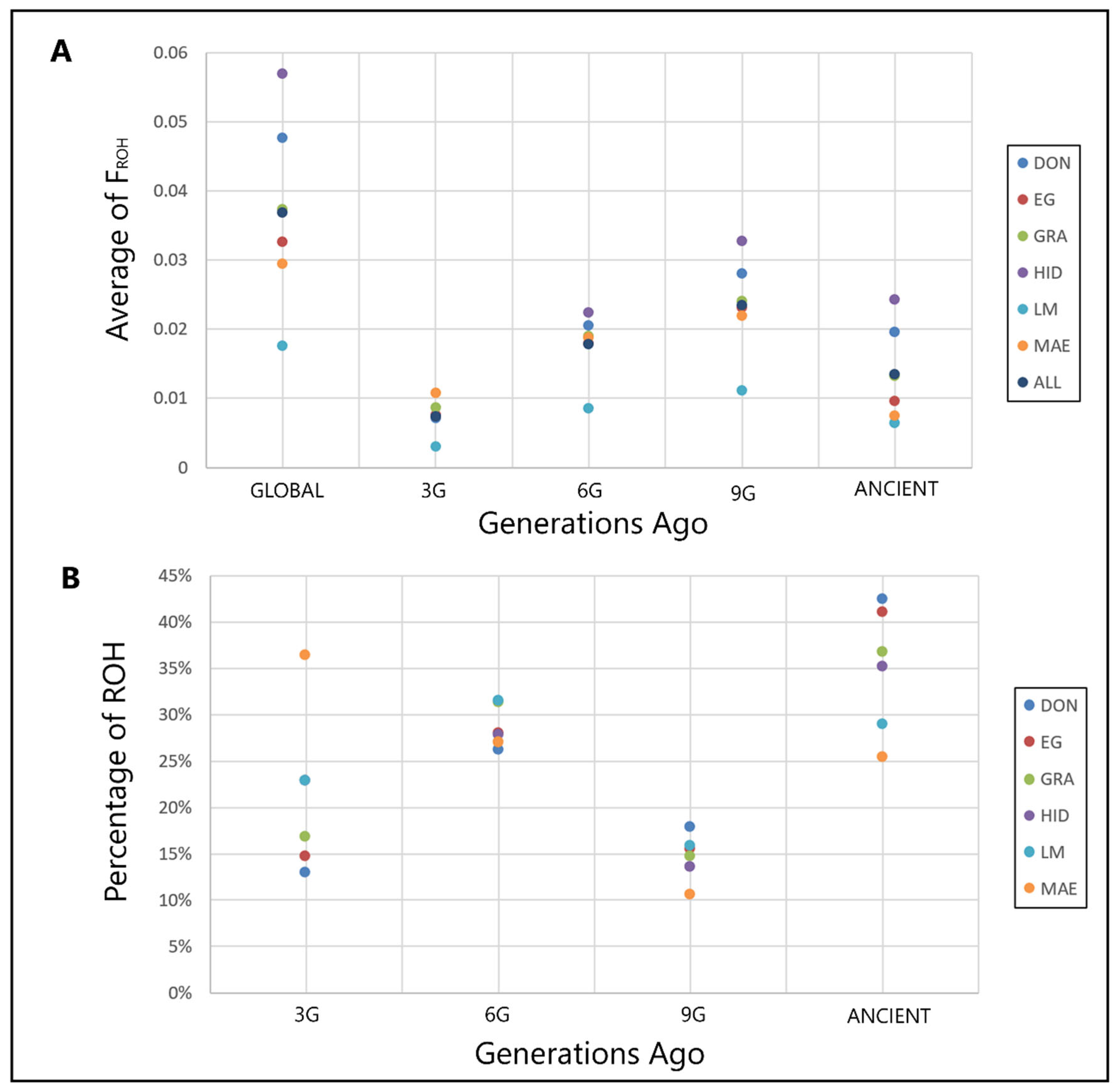