Many zoos offer close-encounter experiences, and visitors frequently share photographs from these experiences online. This study measured the effects that viewing such images had on public perceptions of both the zoo and the animals that they saw. Results indicated that viewing different animal species and the different human proximities within these images can affect public perceptions about how zoos care for their animals and views about the use of animals as pets.

With the rising popularity of social media, conservation organisations and zoos need to understand its impact on public perceptions of the animals they house and their role in conservation. In addition, many zoos offer close-encounter experiences, and visitors frequently share images from these experiences online. This study measured the effects that viewing such encounter images had on public perceptions of both the zoo and the animals they saw. One of sixteen images was randomly presented to participants in two samples: one of Zoo Community followers and members of Zoos Victoria (n = 963), and a representative sample of the Australian public (n = 1619). Each image featured one of four animals (Eclectus parrot, Kangaroo Island kangaroo, Monteith’s leaf insect, Centralian carpet python) and one of four human positions (human and animal touching, human and animal ~30 cm apart, human and animal ~1 m apart, animal alone). Results indicated that viewing different animals and the different human positions within these human–animal encounter images can affect public perceptions of zoo animals. In particular, the closer the proximity of a human to an animal in an image, the more likely respondents were to think that the animal was not displaying a natural behaviour and the more likely it was for General Public respondents to think that the animal would make a good pet. These findings can be used by zoos, wildlife tourism, and media organisations to ensure that they are sending clear, positive, and intended messages about zoo facilities and animals, as well as providing insights into animal encounter images in wider settings. View Full-Text
Keywords: animal welfare; human-animal interactions; social media; wildlife tourism; attitudes towards zoos; pet ownership; conservation messaging animal welfare; human-animal interactions; social media; wildlife tourism; attitudes towards zoos; pet ownership; conservation messaging
►▼ Show Figures 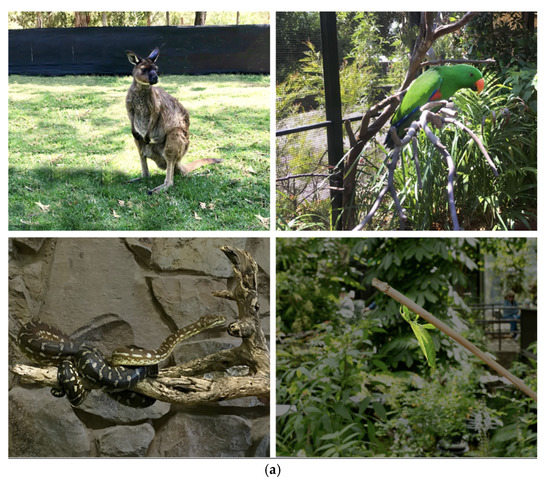