Effects of Increasing Doses of Condensed Tannins Extract from Cistus ladanifer L. on In Vitro Ruminal Fermentation and Biohydrogenation

Public awareness of animal welfare in livestock farming continues to grow all over the world, especially in Central Europe as well as in Australia and Northern America. Consequently, the ban on piglet castration without anaesthesia comes into force in Germany and France in 2021 and other European countries such as Norway, the Netherlands, Switzerland and Sweden have taken legislative actions against piglet castration without pain relief earlier. Hence, alternatives have to be established that prevent the occurrence of boar taint in male pigs. The aim of the present study was to examine the effect of dietary biochar on boar taint compounds (skatole and indole) in faeces and plasma as well as on performance parameters. The biochar was added to the feed whether two or four weeks before slaughter. Animals that received biochar during the last two weeks before slaughter had lower skatole concentrations in faeces at the end of the trial than at the beginning, whereas these results could not be confirmed when animals received biochar for four weeks. Nevertheless, the faeces was drier when animals were fed biochar and performance was not affected. Results indicate that more research is necessary to better understand the nonspecific adsorption capacity of biochar.

The ban on piglet castration without anaesthesia poses a challenge for the meat industry since alternatives ensuring the production of flawless pork have to be established. The aim of this study was to evaluate the effects of biochar on skatole and indole concentration in faeces and plasma on a small scale in finishing boars to prove whether biochar was suitable for use in commercial pork production. Moreover, it was investigated whether biochar affects faecal properties or the performance. For a four-week trial period, 54 boars (bodyweight 97.2 ± 6.88 kg) were divided into three groups. The control (BC0) received no dietary biochar, one group received a diet containing 4% coated biochar (corresponding to 2% pure biochar) for the final two experimental weeks (BC2), and another group for the entire four weeks (BC4), respectively, prior to slaughter. Skatole and indole concentrations were measured in faeces and plasma at the beginning, in the middle and at the end of the trial. Mean skatole concentrations did not differ between groups, but in BC2 faecal skatole was significantly decreased at day 26, whereas in BC4 initial and final faecal skatole levels did not differ. At day 15 and 26, the faecal dry matter content was significantly higher in pigs fed the biochar diet (p < 0.05). View Full-Text
Keywords: skatole; indole; boar; boar taint; piglet castration; biochar; plantcoal skatole; indole; boar; boar taint; piglet castration; biochar; plantcoal
►▼ Show Figures 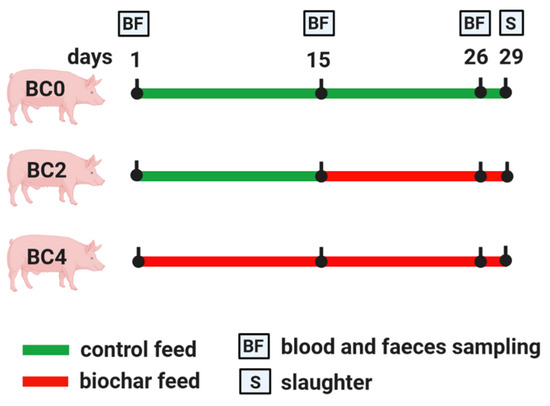