Dogs at the Workplace: A Multiple Case Study
Previous Article in Special Issue

Crossbreeding using exotic breeds is usually employed to improve the growth characteristics of indigenous chickens. This mating not only provides growth but adversely affects excess fat deposition as well. This deposition was regulated by a complicated cellular mechanism including peroxisome proliferator-activated receptors (PPARs) function. Thus, we hypothesized that native chickens breed percentage might be related to PPARs gene expression. This study aimed to study the role of PPARs on fat deposition in chickens which was the different native genetic background. Our results indicated that increasing commercial breed percentage in the chicken leads to increased fat deposition via the increasing of PPARG gene expression. Therefore, the PPARG gene notable as a major gene of cellular fat deposition and might be applied in further study.

This study aimed to study the role of PPARs on fat deposition in native crossbred chicken. We studied the growth, abdominal, subcutaneous, and intramuscular fat, and mRNA expression of PPARA and PPARG in adipose and muscle tissues of four chicken breeds (CH breed (100% Thai native chicken), KM1 (50% CH background), KM2 (25% CH background), and broiler (BR)). The result shows that the BR chickens had higher abdominal fat than other breeds (p < 0.05) and the KM2 had an abdominal fat percentage higher than KM1 and CH respectively (p < 0.05). The intramuscular fat of BR was greater than KM1 and CH (p < 0.05). In adipose tissue, PPARA expression was different among the chicken breeds. However, there were breed differences in PPARG expression. Study of abdominal fat PPARG expression showed the BR breed, KM1, and KM2 breed significantly greater (p < 0.05) than CH. In 8 to 12 weeks of age, the PPARG expression of the CH breed is less than (p < 0.05) KM2. Crossbreeding improved the growth of the Thai native breed, there was also a corresponding increase in carcass fatness. However, there appears to be a relationship between PPARG expression and fat deposition traits. therefore, PPARG activity hypothesized to plays a key role in lipid accumulation by up-regulation. View Full-Text
Keywords: PPAR; gene expressions; fat deposition; Thai native crossbred chickens PPAR; gene expressions; fat deposition; Thai native crossbred chickens
►▼ Show Figures 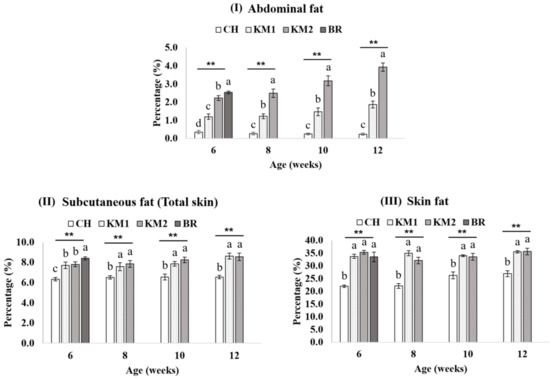