Some marine microalgae usually present in warm waters can produce ciguatoxins (CTXs); these toxins can accumulate in fish through the trophic chain, causing the food poisoning known as ciguatera in humans. It is important to understand how these compounds could be incorporated into fish muscle. For this purpose, this study was conducted using goldfish, an omnivorous freshwater species, daily fed raw fish flesh contaminated with a known toxicity concentration of CTX, seeking the accumulation profile in muscle and any signs of intoxication. Toxicity was detectable from day eight of the toxic diet and reached its maximum after two weeks. Signs of poisoning were observed after two weeks in all treated fish. However, two individuals developed strong symptoms, and one of them was separated and fed non-toxic food for 60 days; it showed recovery signs after the first week, and no toxicity was observed at the end of that non-toxic period. These results demonstrate that this toxin can accumulate in the muscle tissue of goldfish and produce associated symptomatology. Moreover, goldfish can recover and eliminate the CTX from its muscle if the toxin source is not available.

Ciguatoxins (CTXs) are produced by dinoflagellates usually present in tropical and subtropical waters. These toxins are bioaccumulated and transformed in fish causing ciguatera fish poisoning (CFP) in humans. Few trials have been performed to understand how CTXs are incorporated into fish. This study developed an experimental model of goldfish (Carassius auratus) fed flesh contaminated with Caribbean ciguatoxin (C-CTX1). Fourteen goldfish were fed 0.014 ng CTX1B (Eq. g−1 of body weight) daily, and control goldfish received non-toxic flesh. CTX presence was determined by a cell-based assay on days 1, 8, 15, 29, 36, 43, and 84. Toxicity was detected in muscle from the second sampling and then seemed to stabilize at ~0.03 ng CTX1B Eq. g−1. After two weeks, all experimental goldfish developed lethargy and loss of brightness, but only two of them displayed erratic swimming and jerking movements near the sixth sampling. One of these fish had its toxic diet replaced by commercial food for 60 more days; the fish showed recovery signs within the first weeks and no CTX activity was detected. These results indicate that C-CTX1 could accumulate in goldfish muscle tissue and produce toxic symptoms, but also remarked on the detoxification and recovery capacity of this species. View Full-Text
Keywords: ciguatera; Caribbean ciguatoxin; muscle bioaccumulation; cytotoxicity assay; goldfish; omnivorous fish; experimental model; detoxification ciguatera; Caribbean ciguatoxin; muscle bioaccumulation; cytotoxicity assay; goldfish; omnivorous fish; experimental model; detoxification
►▼ Show Figures 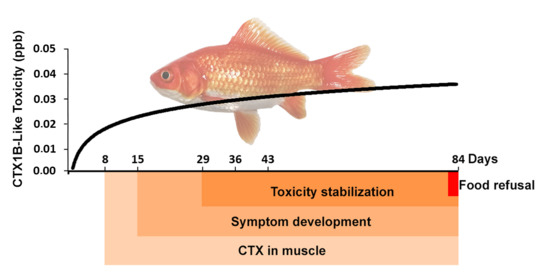