Lipopolysaccharide (LPS) is a component of the outer membranes of Gram-negative bacterial cell wall made of three covalently linked regions: the O-antigen, the core oligosaccharide, and the endotoxin lipid A moiety, which carries the endotoxic activity of LPS. Among Gram-negative bacteria there is significant structural diversity in the lipid A region. Specifically, the number of lipid A acyl chains directly correlates with the ability to induce cytokine production whereas the hexa-acylated forms usually are the most immunostimulant ones, contrary to penta- or tetra- acylated forms that result in weak inflammatory host responses. Ruminal bacteria are predominantly Gram-negative, and their respective LPS presence has been suggested to be associated with ruminal acidosis, a metabolic disorder of cattle with negative effects on health and production. In the rumen, the most predominant phylum is Bacteroidetes which exhibit weak host immunological response compared to widely used Escherichia coli LPS. This review aims to present accumulated knowledge regarding ruminal LPS, pointing out the differences in ruminal LPS compared to widely known LPS, and introduce hypotheses that could contribute to further understanding and planning strategies to tackle ruminal acidosis.

The objective of this review is to present the need for the development of a comprehensive ruminal lipopolysaccharide (LPS) extraction, purification and analysis protocol and state hypotheses that could contribute to planning novel strategies against ruminal acidosis. Lipopolysaccharide is an immunostimulatory molecule of Gram-negative bacterial outer membranes and has been reported to contribute to ruminal acidosis in cattle. Bacterial death and lysis are normal processes, and thus LPS is normally present in ruminal fluid. However, ruminal LPS concentration is much greater during subacute ruminal acidosis (SARA). Contrary to the widely known LPSs, ruminal LPS seems to be composed of a variety of LPS chemotypes that may interact with each other resulting in an LPS “mixture”. Hypotheses regarding the influence of each specific ruminal bacterial specie to innate immunity during SARA, and the representativeness of the exclusive use of the Escherichia coli LPS to rumen epithelial tissue challenges, could expand our knowledge regarding SARA. In addition, possible correlation between the monomeric Toll-like Receptor 4 (TRL4) and the antagonistic penta-acylated lipid A of LPS could contribute to novel strategies to tackle this nutrition disorder. View Full-Text
Keywords: extraction protocol; LBP; Prevotella; single molecule localization microscopy; ruminal LPS extraction protocol; LBP; Prevotella; single molecule localization microscopy; ruminal LPS
►▼ Show Figures 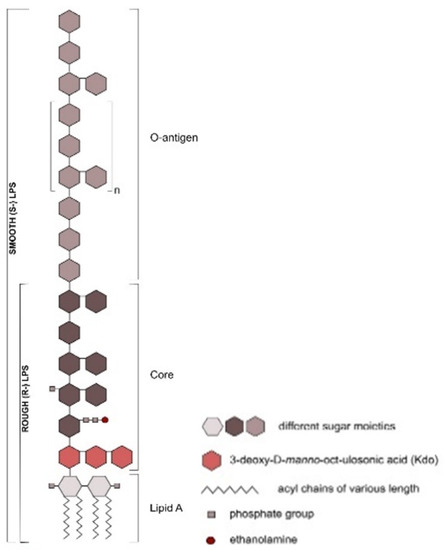