In Vivo Screening and Antidiabetic Potential of Polyphenol Extracts from Guava Pulp, Seeds and Leaves
Previous Article in Special Issue

The Iberian pig is the most representative autochthonous breed of the Mediterranean region with unique genetic and phenotypic characteristics. The breed has been successfully preserved by its high-quality meat and high-priced products. Tenderness is one of the most relevant meat quality traits, and meat tenderization is influenced by genetic and environmental effects such as pre-slaughter handling and post-mortem conditions. Tenderness could be included in Iberian pig breeding programs, mainly focused on the improvement of premium-cuts percentage, in order to avoid the meat quality decline. A better biological understanding of this trait is needed. In the current study, we analyze the transcriptome of pigs divergent for Warner–Bratzler shear force through RNA-seq technique for the identification, characterization and quantification of candidate genes involved in biological pathways, networks and functions affecting meat tenderness.

Tenderness is one of the most important meat quality traits and it can be measured through shear force with the Warner–Bratzler test. In the current study, we use the RNA-seq technique to analyze the transcriptome of Longissimus dorsi (LD) muscle in two groups of Iberian pigs (Tough and Tender) divergent for shear force breeding values. We identified 200 annotated differentially expressed genes (DEGs) and 245 newly predicted isoforms. The RNAseq expression results of 10 genes were validated with quantitative PCR (qPCR). Functional analyses showed an enrichment of DE genes in biological processes related to proteolysis (CTSC, RHOD, MYH8, ACTC1, GADD45B, CASQ2, CHRNA9 and ANKRD1), skeletal muscle tissue development (ANKRD1, DMD, FOS and MSTN), lipid metabolism (FABP3 and PPARGC1A) and collagen metabolism (COL14A1). The upstream analysis revealed a total of 11 transcription regulatory factors that could regulate the expression of some DEGs. Among them, IGF1, VGLL3 and PPARG can be highlighted since they regulate the expression of genes involved in biological pathways that could affect tenderness. The experiment revealed a set of candidate genes and regulatory factors suggestive to search polymorphisms that could be incorporated in a breeding program for improving meat tenderness. View Full-Text
Keywords: RNA-seq; transcriptome analysis; Iberian pig; meat tenderness RNA-seq; transcriptome analysis; Iberian pig; meat tenderness
►▼ Show Figures 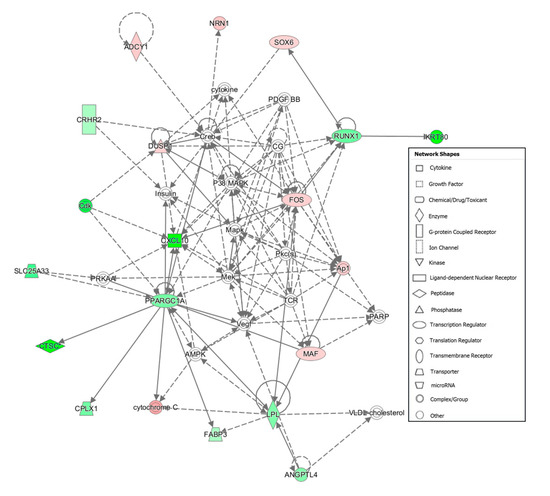