Methionine is a proteogenic sulfur amino acid with a vital role in intermediary metabolism. However, excess Methionine (Met) intake is toxic, leading to hyperhomocysteinemia. Betaine supplementation effectively ameliorates biochemical abnormalities. However, a lack of genetic information hinders the understanding of the mechanisms underlying methionine excess-mediated effects and whether Bet can effectively suppress these effects in geese. This study was performed to evaluate the effects of excess methionine on growth performance, serum homocysteine levels, apoptotic rates, and Bax and Bcl-2 protein levels in geese and to study the role of betaine in relieving excess Met-induced hyperhomocysteinemia. It was found that excess methionine reduces body weight induced by myocardial apoptosis, and betaine can be used to effectively lower plasma homocysteine levels.

The objective of our study was to investigate the effects of excess Methionine (Met) on the growth performance, serum homocysteine levels, apoptotic rates, and Bax and Bcl-2 protein levels in geese and to study the role of Bet (betaine) in relieving excess Met-induced hyperhomocysteinemia (HHcy). In this study, 150 healthy male 14-day-old Yangzhou geese of similar body weight were randomly distributed into three groups with five replicates per treatment and 10 geese per replicate: the control group (fed a control diet), the Met toxicity group (fed the control diet +1% Met), and the Bet detoxification group (fed the control diet +1% Met +0.2% Bet). At 28, 49, and 70 d of age, the geese in the Met toxicity group had significantly lower body weights than those in the control group (p < 0.05). The serum homocysteine levels in geese at 70 d of age in the detoxification group were significantly lower than those in the Met toxicity group (p < 0.05). Compared with the control, Met significantly increased cardiomyocyte apoptosis rates, while Bet reduced them. In conclusion, our results suggest that excess methionine reduces body weight induced by myocardial apoptosis, and Bet can be used to effectively lower plasma homocysteine levels.
Keywords: Hyperhomocysteinemia; methionine excess; betaine; geese Hyperhomocysteinemia; methionine excess; betaine; geese

Methionine (Met) is a sulfur amino acid (SAA) with a vital role in intermediary metabolism [1,2]. Observations made in some prior studies have indicated that optimal supplementation with Met can improve growth performance and body protein synthesis in growing birds [3,4,5]. However, among the constituent amino acids of proteins, Met is toxic if consumed in excess [6]. The supplementation of voluntarily consumed food with Met levels that are four to six times the estimated requirements can suppress food intake and growth [6,7]. The tolerable upper limit of Met for growing ducks were less than 1.38%, considering the growth performance [6]. Excessive Met intake can also cause hepatic oxidative/nitrosative damage, hepatic encephalopathy, erythrocyte morphological alterations, and resultant splenic hemosiderosis in rats [8].
Homocysteine (Hcy) is a nonproteogenic SAA generated by the intrahepatic transmethylation of dietary Met [9]. Hcy functions as a product and a substrate of Met. Hcy accumulation as a result of impaired metabolism leads to an acquired metabolic anomaly known as hyperhomocysteinemia (HHcy), which was first identified by McCully [10]. HHcy occurs when Met levels increase in the blood due to various conditions. Costa et al. [11] demonstrated that dietary supplementation of Met and/or Met sulfoxide alters lipid peroxidation and carbonyl content in young rats.
The feature of atherosclerotic lesions is apoptotic cell death in both animals and humans [12,13]. It has been reported that apoptosis leads to a greater lesion rupture risk by reducing the number of viable smooth muscle cells of mice [14]. However, the cellular pathways responsible for this effect and their correlation with atherothrombotic disease are not fully understood. Recent studies have demonstrated that Hcy causes endothelial cell dysfunction and induces apoptotic cell death among cell types relevant to atherothrombotic disease [15], including endothelial cells and smooth muscle cells. However, the oral administration of betaine (Bet) [16] and B vitamins [17] can alleviate HHcy and attenuate atherogenesis in animal models of rats [17]. Moreover, numerous studies have shown that the process of apoptosis is mediated by proteins of the Bcl-2 family, which comprise antiapoptotic components (e.g., Bcl-2 and Bcl-xL) and proapoptotic components (e.g., Bax, Bak, and Bad). The ratio between B-cell lymphoma 2 (Bcl-2) and Bcl-2 associated protein X (Bax) determines cell survival or death following an apoptotic signal [18].
Excess Met causes marked growth depression in birds. In general, considerable evidence has revealed that excess Met is toxic to many vertebrates, including humans [10], mice [19], and poultry [6,20]. It appears that excess Met could lead to HHcy and reduced body weight by myocardial apoptosis. The biochemical effects of excess Met are complex and are not completely understood, and their mechanisms remain to be elucidated. In particular, information on the metabolic events linking Met excess to pathology in geese is lacking. Hence, many attempts have been made to alleviate HHcy through lower plasma Hcy concentration by folate or Bet, since Bet would promote the metabolism of Hcy and reduce the intravital Hcy level. Considering that the pathophysiology of HHcy is as yet not clear and that high tissue levels of Met may be harmful, the objective of our study was to investigate the effects of excess Met on growth performance, serum Hcy levels, apoptotic rates, and Bax and Bcl-2 protein levels in geese and to study the role of Bet in relieving excess Met-induced HHcy.

The animal study was approved by the Institutional Animal Care and Use Committee (IACUC) of the Yangzhou University Animal Experiments Ethics Committee under permit number SYXK(Su) IACUC 2019-0029. All geese experimental procedures were performed according to the Regulations for the Administration of Affairs Concerning Experimental Animals approved by the State Council of the People’s Republic of China.

This study was conducted with 150 healthy male Yangzhou geese at 14 d of age from a commercial hatchery (Yangzhou Goose Co. Ltd., Yangzhou, China). All of the geese had similar body weights (BWs) (473 ± 0.36 g) and were randomized into three groups that included five replicates per treatment and ten geese per replicate. A basal corn/soybean meal diet with two stages (14–28 d and 29–70 d) was formulated to meet the nutritional needs of the geese National Research Council (NRC), 1994 (Table 1). The control group received only the basal diet from 14 d to 70 d of age. The Met toxicity group received the basal diet supplemented with 1% Met. The Bet detoxification group received the diet given to the Met toxicity group supplemented with 0.2% Bet. The supplementation ratios of Met and Bet were cited by Xie et al. [6] and Setoue et al. [16]. The tolerable upper limit of dietary Met for growing ducks was less than 1.38% on the basis of the growth performance. The Met used in the feed was DL-Met. The geese were fed in separate plastic-floored pens with 2 cm2 square holes that were laid 70 cm above the ground. All manure was cleaned at the end of the trial. All geese were fed and watered ad libitum for 56 d. Water was provided in a half-open plastic cylindrical water tank, and the feed was provided in feeders on one side of each pen. The geese were reared indoors under similar environmental conditions (temperature: 26.0 ± 3.0 °C; relative humidity (RH): 65.5 ± 5.0%; lighting period: 16 h; space allocation: 0.5 m2/gander).

Feed intake (FI) by pen was measured on a daily basis, and BW was recorded at 14, 28, 49, and 70 d of age. The average daily feed intake (ADFI), average daily gain (ADG), and feed-to-gain ratio (F/G) were calculated from 14 to 28 d and from 29 to 70 d of age, and mortality was recorded as it occurred.
Calculations:
ADFI = feed consumption/feeding days in the whole period
ADG = total weight gain/feeding days in the whole period
F/G = ADFI/ADG
When the geese reached 70 d of age, 2 geese from each treatment replicate (5 replicates per treatment; n = 30 geese) were randomly selected for blood collection from their wing veins.

Blood drawn from wing veins was cooled in ice water and centrifuged for 10 min at 4500 rpm to obtain plasma for the measurement of biochemical indices. The plasma was stored at −20 °C until analysis. The plasma Hcy concentrations in peripheral blood were determined according to the previously described methods of Feussner et al. [21]. The thiol compound was liberated from plasma proteins by reduction with tri-n-butyphosphine and derivatized with a thiol-specific fluorogenic marker, 7-fluoro-benzo-2-oxa-1,3-diazole-4-sulpho-nate(Shanghai Yishi Chemical Co., Ltd, Shanghai, China). The derivative was separated isocratically within 7 min by reversed-phase HPLC using a Superspher 100 RP-18 column(Guangzhou Xinghe Biotechnology Co., Ltd, Guangzhou, China) as stationary phase.

The data are expressed as the means ± standard deviations (SDs) and were subjected to Kolmogorov-Smirnov (KS) testing to confirm normality. Different groups were compared using one-way analysis of variance (ANOVA) followed by the Student-Newman-Keuls post hoc test with SPSS 17.0 (SPSS, Shanghai, China). p < 0.05 was considered to indicate statistical significance.

The effects of Bet on the expression of apoptosis-related proteins in geese with HHcy are shown in Figure 2 and Table 4. The protein expression levels of Bcl-2 were significantly lower in the Met toxicity and Bet detoxification groups than in the control group (p < 0.05) (Table 4). There were no significant differences between the control group and the other groups regarding the expression of other apoptosis-related proteins.

Conceptualization, Z.Y.; data collection, data analysis, software and writing—original draft, Y.Y., J.Y. and X.W.; Writing—review and editing, H.Y. and Z.W. All authors have read and agreed to the published version of the manuscript. 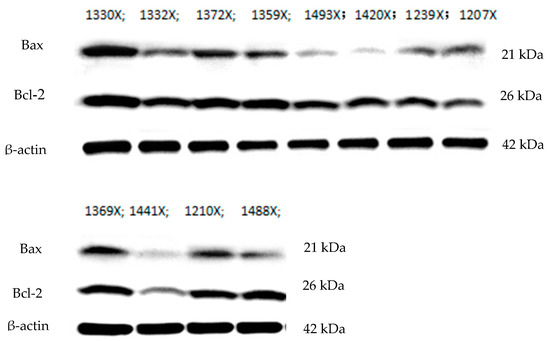