Luteal Presence and Ovarian Response at the Beginning of a Timed Artificial Insemination Protocol for Lactating Dairy Cows Affect Fertility: A Meta-Analysis
Previous Article in Journal

Globally, there is a need to preserve threatened species before they disappear. The management of these species is often aided, particularly in Australia, by the addition of exclusion fences that prevent the movement of invasive or pest predators and competitors into the conservation area. Widespread use of conservation fences is limited by the availability of suitable conservation land and the relatively high costs of such fencing. Here, we discuss the potential conservation benefit of pest exclusion fences erected on agricultural land. We assess the spatial overlap of existing agricultural exclusion fences (known as “cluster fences”) with the potential habitat of listed threatened species and consider whether or not identified threats to these species are potentially alleviated within cluster fences. We find that there are several species that face threats which may be alleviated with cluster fences and propose that active recovery of threatened species on fenced agricultural land be seriously considered.

The global effort to conserve threatened species relies heavily on our ability to separate these species from the processes that threaten them, and a common tool used for this purpose is exclusion fencing. In Australia, pest animal exclusion fencing has been repeatedly used on conservation land on a small scale to successfully exclude introduced predators and competitors from threatened native fauna populations. However, in recent years, “cluster fencing” on agricultural land has re-emerged on a large scale and is used by livestock producers seeking to reduce predation losses by dingoes (Canis familiaris) and manage total grazing pressure from native and introduced herbivores, including red kangaroos (Osphranter rufus). Given that the primary threats to at-risk native fauna are also predation and overgrazing, there may be potential for cluster fencing on livestock land to achieve additional fauna conservation benefits. Understanding the amount, location and potential conservation value of cluster fenced livestock land is critical for determining how these areas might contribute to broader threatened fauna recovery goals. Drawing from publicly available databases maintained by the Australian Government, we assessed the spatial overlap of threatened species’ distributions with 105 cluster fences erected in Queensland since 2013, which cover 65,901 km2 of land. These cluster fenced areas represent 18 biogeographic subregions and may contain 28 extant threatened mammals, birds and reptiles including 18 vulnerable species, 7 endangered species and 3 critically endangered species. An average of nine threatened species or their habitats were identified per cluster, and over three quarters (78.6%) of these species face at least one threat that is being mitigated within clusters. The true status of threatened and pest species within clusters is largely unknown or unrecorded in most cases, but some examples of pest eradication and threatened species recovery are already emerging. Given the vast size of the cluster fenced estate, the many different biomes and species that it represents and the nature of the threats being removed within these fenced areas, we contend that agricultural cluster fencing may offer an unprecedented opportunity to advance threatened fauna conservation goals for some species at scales previously thought impossible and should be a research priority for threatened species managers. View Full-Text
Keywords: agriculture; cluster fence; conservation fencing; dingo; feral goat; Environmental Protection and Biodiversity Conservation Act 1999; threatened species agriculture; cluster fence; conservation fencing; dingo; feral goat; Environmental Protection and Biodiversity Conservation Act 1999; threatened species
►▼ Show Figures 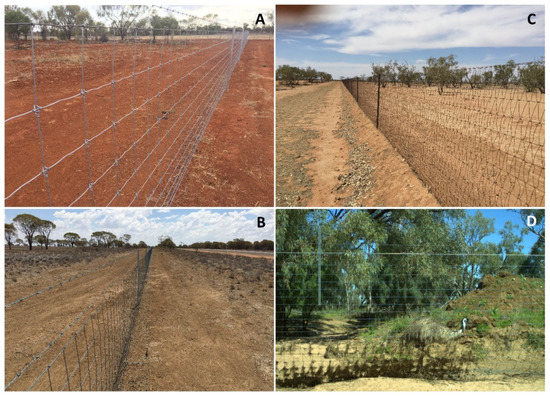