A Data-Driven Prediction Method for an Early Warning of Coccidiosis in Intensive Livestock Systems: A Preliminary Study
Previous Article in Journal

Live animal encounter programs are an increasingly popular occurrence in the modern zoo. The effects of such encounters on program animal welfare have not been studied extensively to date. The aim of this study was, therefore, to explore animal welfare effects associated with encounter programs in a small felid, the serval, which is commonly involved as a program animal in zoos. Specifically, this study investigated how serval behaviour and adrenocortical activity (level of faecal cortisol metabolites) were affected by short-term variations in encounter frequency. Over the course of the study, the frequency of encounters was manipulated so that servals alternated between four different treatments, involving interactive presentations, behind-the-scenes encounters, both activities combined, or no interaction at all. The cats exhibited a significant reduction in stereotypic pacing on weeks when participating in interactive presentations, or the two activities combined. However, behavioural diversity (total number of behaviours exhibited) was strongly reduced on weeks when cats participated in both activities. Adrenocortical activity did not vary significantly between treatments. The reduction in stereotypic pacing suggests that involvement in an encounter program may exert a positive short-term welfare effect on the individual servals. A reduction in behavioural diversity, which was not considered a negative welfare effect in the short term, may, however, warrant some need for caution if a more frequent encounter program was to be implemented long-term. These findings contribute to the current knowledge of visitor–animal interaction in zoo-housed felids, which is very limited to date, and could also provide valuable guidance to zoo professionals that are currently engaging in an encounter program with servals or planning on implementing such a program in the future.

The serval (Leptailurus serval) is a small African felid that is well represented in zoos and often serves as an animal ambassador in encounter programs with zoo visitors. The impact on serval welfare in relation to such programs has not been investigated to date, and the aim of this study was to assess short-term welfare effects of varying levels of visitor interaction in two captive servals. Weekly blocks of four different treatments were imposed three times on each animal over 12 weeks, and the treatments involved (1) Presentations (serval undertaking a routine training session in a designated presentation space, typically attracting high visitor numbers), (2) Behind-the-scenes (BTS, a close encounter allowing a small group of visitors to interact closely with the cat in its enclosure), (3) Presentations and BTS combined, and (4) No visitor interaction. Serval activity budgets as well as behavioural diversity were created from behaviours observed from Close Circuit Television (CCTV) footage during four daily recording sessions per animal over three consecutive days per treatment, using instantaneous scan sampling every 60 s. Individual faecal samples were collected daily to monitor changes in faecal glucocorticoid metabolite (FGM) concentration. Results indicate that the mean number of scans with stereotypic pacing was significantly reduced (p = 0.01) during Treatments 1 and 3, when cats participated in presentations only, or the two activities combined. Conversely, a significant reduction in behavioural diversity (p < 0.001) was observed when cats participated in Treatment 3, i.e., cats expressed fewer behaviours when interaction with visitors was more frequent. FGM concentrations did not vary significantly with treatment (p > 0.05). Given the reduction in stereotypic pacing, these findings suggest that involvement in an encounter program appears to exert an overall positive short-term welfare effect on the individual servals in this study. Although a reduction in behavioural diversity was not considered a negative welfare effect in the short term, potential long-term negative welfare effects resulting from a more frequent encounter program could not be ruled out in the present study. View Full-Text
Keywords: human–animal interaction; live animal encounter programs; small felids; visitor effects; zoo animal welfare human–animal interaction; live animal encounter programs; small felids; visitor effects; zoo animal welfare
►▼ Show Figures 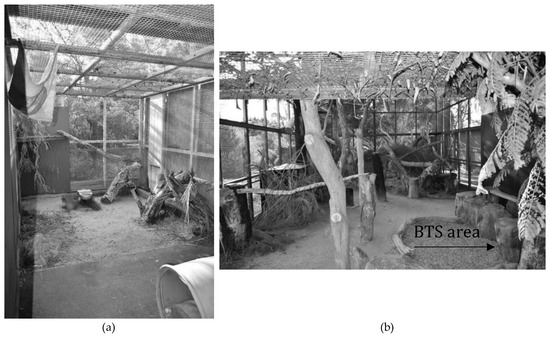