According to EU legislation, violations involving farm animal welfare need to be sanctioned. With this study, our aim was to assess criminal sanctions by Finnish district courts concerning cattle and pig welfare crimes. We found that small cattle farms were over-represented in court statistics. The most common sanctioned violations of cattle and pig welfare were the lack of cleanliness of premises and animals and inadequate feeding and watering. The violations were shown to have been continuing for a long time before a defendant stood trial for their actions. The penalties were lenient, i.e., the violations were not perceived as particularly blameworthy by the court. Veterinarians have a major role in initiating criminal procedures, collecting evidence, and evaluating the relevance of violations. Therefore, to improve the efficacy of criminal procedures, the police and prosecutors should work in close collaboration with veterinarians.

EU legislation requires the violations of animal welfare standards to be sanctioned. Our aim was to evaluate criminal sanctions concerning violations of cattle and pig welfare on Finnish farms. We analyzed 196 court cases heard in Finnish district courts from 2011 to 2016. Almost all the cases (95%) concerned the violations of cattle welfare, of which 61% occurred on small farms. The lack of cleanliness and inadequate feeding and watering were the most common reported violations. Median time span from the start date of an offending to a judgement was slightly less than two years. Of the cases, 96% resulted in conviction. The court did not perceive the violations as being highly blameworthy as a small fine and a short conditional imprisonment were the most often imposed sanctions. A ban on the keeping of animals was used as a precautionary measure in half of the cases. Veterinarians were shown to have an important role in the initiation of criminal procedures, providing evidence for the police, and acting as witnesses. Therefore, it is crucial to achieve a well-functioning collaboration between veterinarians and the police and prosecutors. The expertise of these authorities on animal welfare legislation should also be emphasized to improve the efficacy of criminal procedures.
Keywords:
animal welfare crime; cattle welfare; criminal sanction; pig welfare

We requested judgements from 2011 to 2016 concerning violations of cattle and pig welfare on farms from Finnish district courts after the Legal Register Centre had granted permission to obtain the information. Further, the University of Helsinki Ethical Review Board in the Humanities and Social and Behavioural Sciences provided an ethical statement (11/2020) on the study. Cattle and pigs were chosen as these farm animals are known to be neglected most in quantity [12]. A total of 196 judgements were obtained for evaluation in this study. If a judgement given by a district court had been appealed against, the judgement of the court of appeal was requested. Pursuant to converting the judgements into an electronic format, identification data were removed.
For the analyses of criminal procedure, we collected data on the type of a crime, the period between the start of an offending defined by a court (usually the date of the first animal welfare inspection) and institution of proceedings in a district court, and the period a case was pending legal actions in a district court. In addition, we collected information on prosecutors’ witnesses, the number of cases prosecutors had prosecuted during the study period, and the number of bans on the keeping of animals prosecutors had requested. When available from the judgement, offenders’ previous animal welfare crime history were also collected. The answers of defendants to accusations were analyzed using content analysis [16] to identify common justifications for an offending and were in general divided into three categories: confession, part confession, and denial.
To analyze the violations of cattle and pig welfare and related farm demographic information, we collected the following data: the number and species of animals on a farm, types of violations, and duration of an offending confirmed by a court. The farms were categorized into small (fewer than 50 cattle or fewer than 250 pigs), medium (50–100 cattle or 250–750 pigs), or large (more than 100 cattle or 750 pigs).
In the analysis of penalties, only judgements concerning single animal welfare crime were used. Only one, the harshest, penalty per case was used in the analysis.
We used nonparametric tests as the Kolmogorov–Smirnov test (p < 0.05) showed data to be not normally distributed. We used the Mann–Whitney U test to make comparisons between offenders who denied their crime and those who confessed them in the duration of an offending and in the prevalence of violations and to examine the impact of a violation to the amount of the day-fines and length of an imprisonment. Kruskal–Wallis U test was used to compare the prevalence of violations between different herd sizes. We used a Chi square test with crosstabs to test relationships between violations and death animals found on a farm, urgent measures executed on a farm, an imprisonment sentence, and a ban on the keeping of animals. We used Spearman’s rank correlation coefficient to evaluate correlations between the number of inspections performed on a farm, the duration of an offending, and the harshness of penalty. All the analyses were conducted using SPSS statistical software (IBM SPSS Statistics for Windows, Version 22.0. Armonk, NY, USA: IBM Corp.). Statistical significance was accepted at a confidence level of 95% (p < 0.05).

From the total of 196 cases concerning the violations of cattle and pig welfare on farms in Finnish district courts during 2011–2016, the median number per year was 33 (range 22–40). Of the cases, 96% (n = 189) resulted in conviction. Charges were dismissed in six cases (3%), and one case (1%) was withdrawn by a prosecutor due to inconsistent evidence. Of the cases, 14% (n = 27) had been heard by the courts of appeal.
In 84% of the cases (n = 165) there was only one defendant, while two defendants were involved in 14% (n = 27) of the cases and three defendants in 2% (n = 3) of the cases, resulting in 228 defendants altogether. Of the defendants, 96% (n = 218) were found guilty for animal welfare crime(s), while 4% (n = 10) were acquitted. Of the offenders, 89% (n = 195) were convicted for only one animal welfare crime, while the rest were convicted for several animal welfare crimes or crime(s) other than an animal welfare crime, such as causing danger of the spread of a veterinary disease, marking and registration offences, waste offences, environmental offences, and imperilment.

Criminal procedure originated from an animal welfare inspection in most cases (98%; n = 192), i.e., the initiator of a procedure was an official veterinarian. Other initiators were a neighbor, a vacation substitute, and a carcasses driver. Median time span from the start date of an offending to the institution of proceedings in a district court was 1.5 years (range from 63 days to 7.5 years). The median period a case was pending in a district court was 86 days (range 14–494).
The cases were prosecuted by 102 prosecutors. Two-thirds of the prosecutors (n = 68) prosecuted only one or two cases during the study period, while one-third (n = 34) were involved in more than two cases. The prosecutors demanded a ban on the keeping of animals in 70% (n = 137) of the cases. Nearly two-thirds of the demands (n = 91) were accepted. The prosecutors based their cases on a median of four animal welfare inspections (Table 1) and used veterinarians as witnesses in 82% (n = 160) of the cases.

We showed that cattle and pig welfare cases proceeding to a district court are most often concerned with the lack of cleanliness and the inadequate feeding and watering of animals. The criminal procedure was a time-consuming process resulting in lenient penalties. The role of veterinarians in collecting evidence and evaluating the relevance of violations was important. We conclude that the threshold for initiating a criminal procedure should be kept low and there should be additional investment to achieve well-functioning cooperation between the police, prosecutors, and official veterinarians. Furthermore, the expertise of these authorities on animal welfare legislation is crucial.

The authors declare no conflict of interest. The funder had no role in the design of the study; in the collection, analyses, or interpretation of data; in the writing of the manuscript, or in the decision to publish the results. 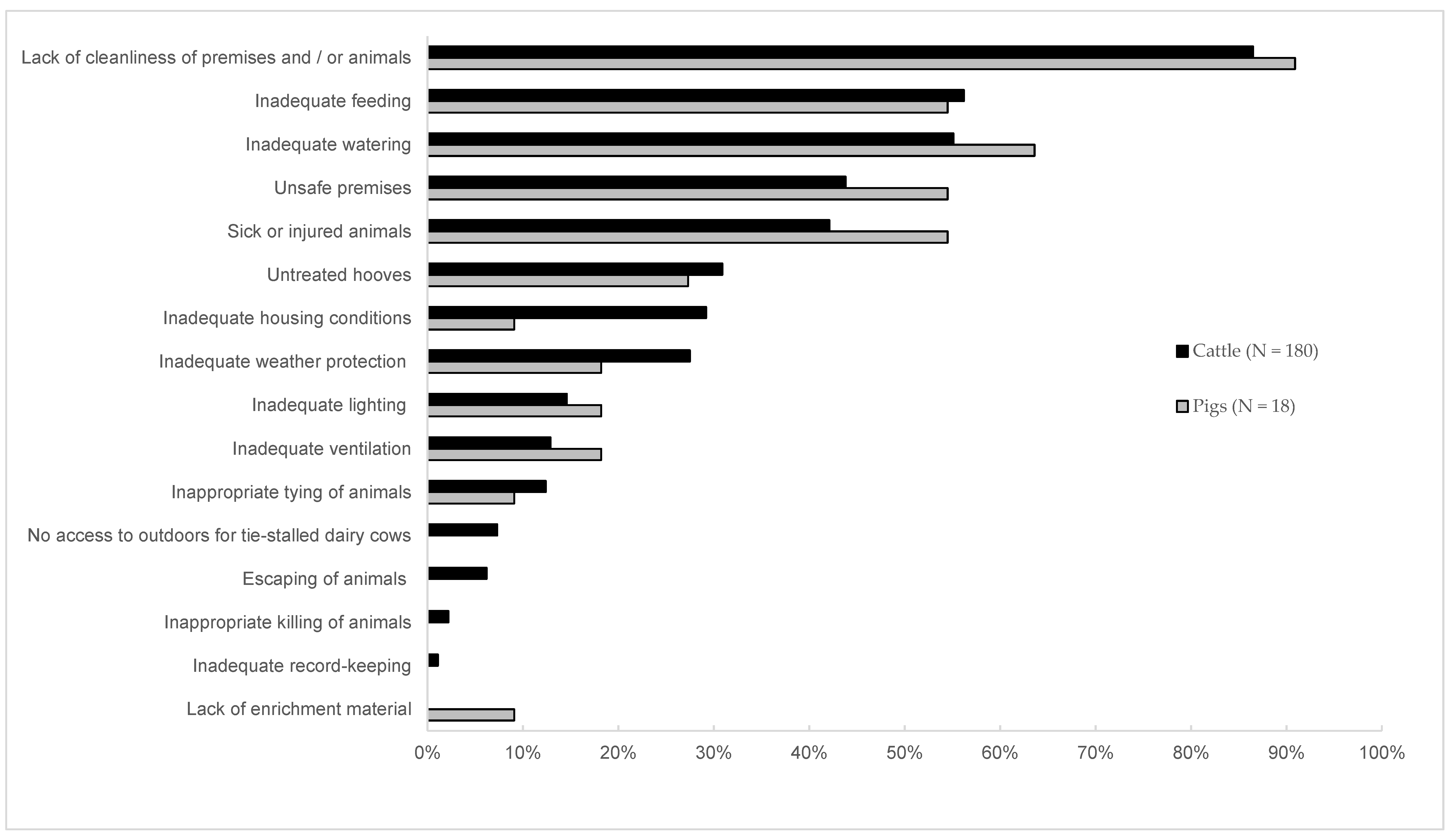