Leisure horse riding is becoming an increasingly popular activity, but often the regard for the welfare of recreational horses is insufficient. Most often, this situation is associated with workload or insufficient knowledge of the owners. Another problem may be overloading the animals with excessive weight of the rider, because the problem of obesity affects more and more societies. Carrying heavy loads significantly reduces horse comfort and affects movement mechanics. Prolonged use of the horse in this way may translate into health and lameness issues in the back and limbs. There are currently no strict weight limits for riders. However, we believe that horse users should pay more attention to this problem. As shown in this study, a horse’s load above 20% of his body weight, even with little effort, affects changes in surface temperature and the activity of the autonomic nervous system.

It was assumed that a horse with its rider body weight found in the upper limit may negatively impact the horse’s welfare. The objective of this paper was to analyze the differences in body temperature and selected heart rate parameters in horses in response to physical exercise accompanied by various rider’s body weight loads. The study was carried out on 12 leisure, 10–15-year-old warmblood geldings. The horses were ridden by two equally qualified riders whose body weights were about 20% and 10% of the average body weight (BW) of the animals (about 470 kg). Each rider rode each of the 12 horses for 13 min walking and 20 min of trotting. Images of the horse at rest, after physical exercise directly after unsaddling, and during the recovery phase (10 min after unsaddling) were taken with an infrared thermography camera. For analysis, the temperatures of selected body parts were measured on the surface of the head, neck, front, middle, and back (croup) parts of the trunk, forelimb, and hind limb. Immediately after the infrared thermography images were taken, the rectal temperature of the horse was measured. The heart rate parameters were measured at rest for 10 min directly before, during, and 10 min following the end of a training session. A multivariate analysis of variance (ANOVA) for repeated measurements was performed. Statistical significance was accepted for p < 0.05. A rider BW load on a horse of approximately 20% of the horse’s BW led to a substantial increase in the superficial temperatures of the neck, front, middle, and back parts of the trunk in relation to these body parts’ average temperatures when the load was about 10% BW. The head and limb average temperatures were not significantly affected by the load of the exercised horse. A horse’s load above 20% of his body weight, even with little effort, affects changes in surface temperature and the activity of the autonomic nervous system. View Full-Text
Keywords: horse; thermography; heart rate parameters; rider weight horse; thermography; heart rate parameters; rider weight
►▼ Show Figures 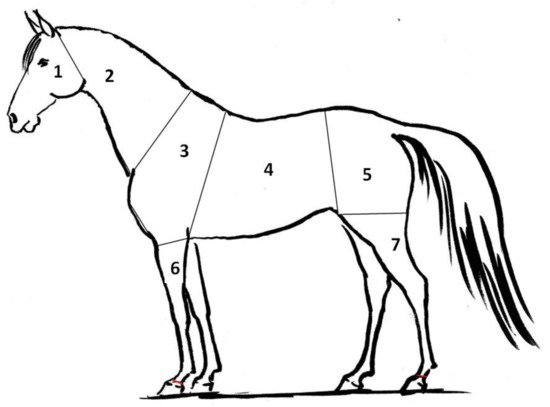