Differences between Female and Male Inmates in Animal Assisted Therapy (AAT) in Austria: Do We Need Treatment Programs Specific to the Needs of Females in AAT?
Previous Article in Journal

Examining the Effects of Rabbit-Assisted Interventions in the Classroom Environment

At the beginning of the first grade of elementary school, children generally show higher levels of anxiety, which continually decreases due to interactions with teachers. However, anxiety levels in children can also be decreased by using additional methods such as animal-assisted interventions in class. In this study, the efficiency of a rabbit-assisted intervention was examined in two first-grade classes with different backgrounds. In one of the classes, most of the pupils had special education needs. It could be concluded that rabbit-assisted interventions were particularly efficient where the anxiety levels of the children were high. This method seems to be useful in improving the efficacy of the educational ability of teachers.

The effects of the different periods (assisted vs. non-assisted), sex of the children (male vs. female), and the school system (integrating vs. non-integrating) on the anxiety scores were analyzed using Generalized Linear Model GLM analysis taking into account that the same children were evaluated repeatedly. Statistical analysis was performed using SAS 9.4 software using the PROC MIXED procedure.

Results of the GLM analysis are given in Table 1. The procedure calculated the corrected means for the different factor levels and estimated the differences among them.
Based on the results, all the examined factors significantly affected the anxiety score. The largest effect was found based on the type of school, where the pupils of the majority school showed substantially lower anxiety scores than those children in the integrating school. In general, male pupils had lower anxiety than females. Among the analyzed factors, the presence of the rabbits in the class had the smallest effect on anxiety, but the presence of the rabbits significantly decreased the anxiety score by around 8%, on average.

Based on the findings of this study it can be stated that the presence of the rabbits significantly reduced the stress (related to the starting of the elementary school) of children. Similar results were reported by Havener et al. [61] based on 7 to 11-year-old children where the stress related to dental treatments could also be reduced with animals.
The level of anxiety was reduced during the periods of cognitive trainings. The magnitude of the animal-related effect on the anxiety was different in the analyzed schools, but it was not surprising as anxiety levels of children of the two schools were different from the onset of the study.
In the integrating school (with SEN children) the decrease of the stress was larger after the third cognitive training compared to the other school. However, it must be noted that animal-assisted interventions can be effective if the initial anxiety level is high. The cognitive trainings applied in this study were suitable to decrease the anxiety level in schools, helping the teachers’ work become more effective.
Concerning the effect of the animal assistance, some latency can be observed. Examining the decrease of anxiety caused by small animals, O’Haire et al. [35] analyzed typically-developing children diagnosed with Autism Spectrum Disorder (ASD) and reported that ASD children showed higher activity and stress in every situation except when small animals (guinea pigs) were present.
The animal-assisted interventions have a positive influence on motivation, self-efficiency, attention, self-control, and group-related competences [10]. However, it is important to keep in mind that tradeoffs between humans’ and animals’ health should be avoided, and synergistic benefits should be achieved on both sides during animal-assisted interventions [62]. According to Menna et al., parameters that need to be further investigated include interspecific relationships and the factors influencing them, as well as the inter-specific relational competences of the species and the individual animal chosen and its relationship with the handler [63].
At the beginning of the teaching period, the level of anxiety in one of the examined classes remained under 35. Nevertheless, there was an apparent decrease in the scores of the first and second evaluation (Figure 1), which was the result of the activity of the teachers who helped the children to adapt to elementary school education. Afterwards, a slight fluctuating pattern could be observed where the scores were somewhat higher in the non-assisted compared to the assisted periods. In the other class (which belongs to an integrated school), the anxiety score tendencies were different. The teachers’ activities to help with adaptation at the initial period were less effective. However, the fluctuating pattern of the scores in the assisted and non-assisted periods was more pronounced than in the other class with no integration policy. Despite of the favorable effect of the rabbit-assisted intervention, the level of anxiety of children originating from the integrating school (Figure 2) was constantly higher (“anxious/stressed” to “slightly stressed”) than in the other class (“slightly stressed” to “normal”) with no integration.
Pooling the scores of all the animal-assisted and control periods (Figure 3), the score of the assisted period was lower by 2.64, which corresponds to 8.45%. The meaning of this finding is that on average the anxiety level could be decreased from “slightly stressed” to “normal”.
The effect of the assisted periods was larger in integrating schools (9.48%) than in the non-integrating schools (7.24%) (Figure 4).
School children showed not only highly variable initial scores, but also the magnitude of score changes was variable following the assisted and non-assisted periods. Based on their initial anxiety scores, pupils were classified into three groups. Then, the score changes of these groups were examined. In the “stressed” group (Table 2) the decrease of the anxiety scores was 5.06% during the assisted periods (36.19) versus the non-assisted periods (31.13). Consequently, classification changed from “stressed” to “slightly stressed”. Some of the children decreased their anxiety level scores by 19–20 by the end of the intervention, and the average score differences between the assisted and non-assisted periods was 10.
Lower improvement was found among the “slightly stressed” children (Table 3), where the anxiety scores were 1.94% lower in the assisted periods. However, some children showed 7% improvement, while others did not show any change in the anxiety level scores.
Among the normal category students (Table 4), minimal (0.68%) changes could be observed. For most of these children, no change in stress level was registered. Moreover, in some cases, a slight negative effect of the presence of the animals was registered. For this group, the animal-assisted training seems to be unnecessary. Occasionally, the presence of the rabbit may even disturb them in their learning activity.

Based on our pilot research, the effect of rabbit-assisted activity was beneficial on the anxiety of first-grade pupils. The favorable effect of animal assistance was dependent on the level of anxiety at the initiation of the research. Most pronounced improvements were observed for the “stressed” children, while the improvements were lower and negligible, respectively, for “slightly stressed” and “not stressed” pupils. The animal assistance was more effective in integrating schools. It can be concluded that rabbit-assisted interventions were suitable for decreasing the anxiety levels of elementary school children, improving the efficacy of the education activity of teachers. There are ongoing investigations in three schools (five classes). The rabbits are evaluated by means of boldness tests, children by saliva tests, and the rabbits’ feces samples are taken weekly (before and after animal assisted interventions) in order to determine the level of stress. Hence, the effect of the AAI on the anxiety levels of children and the level of stress of the rabbits can be evaluated simultaneously. 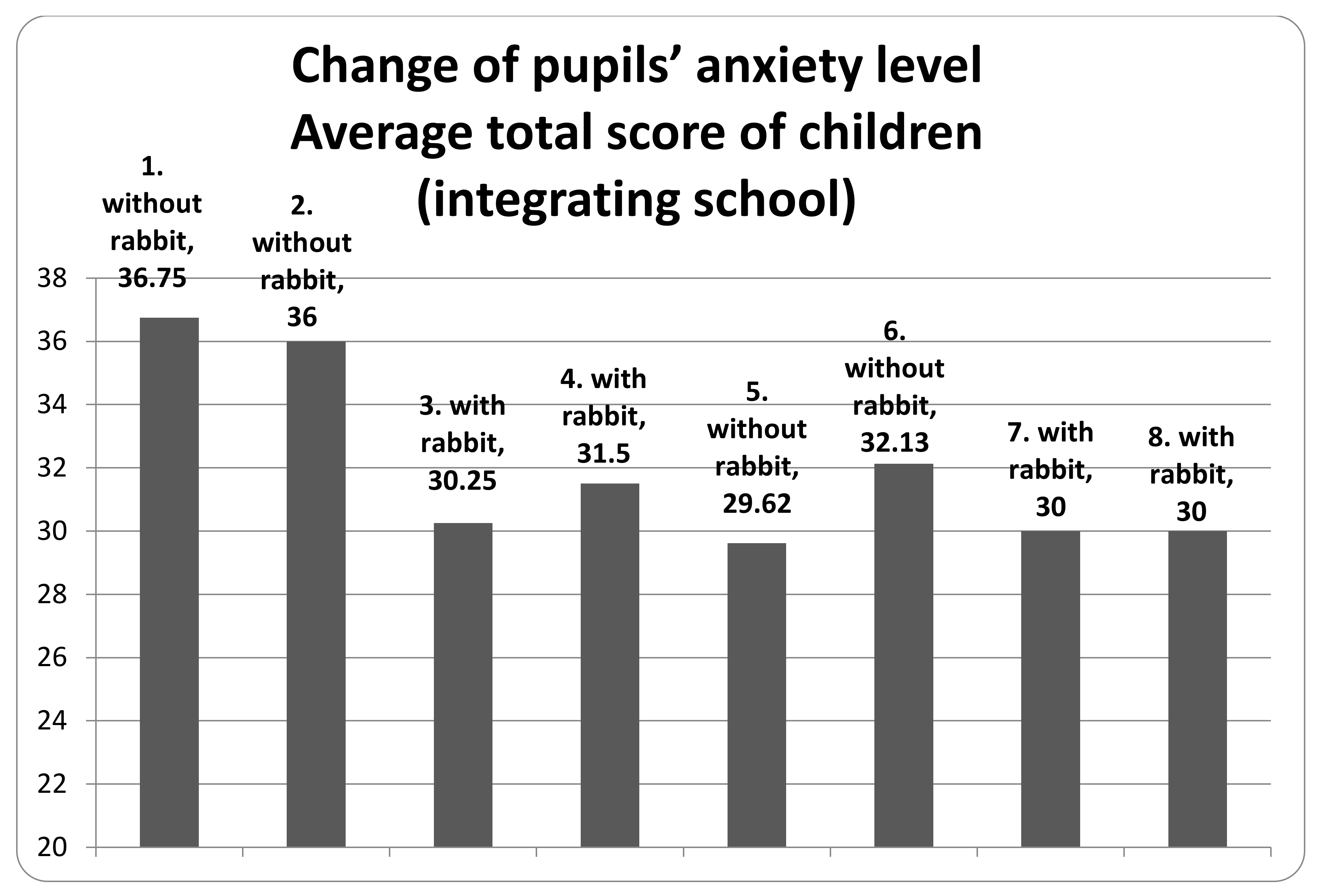 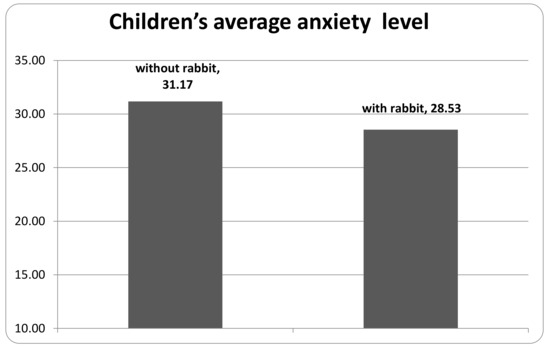 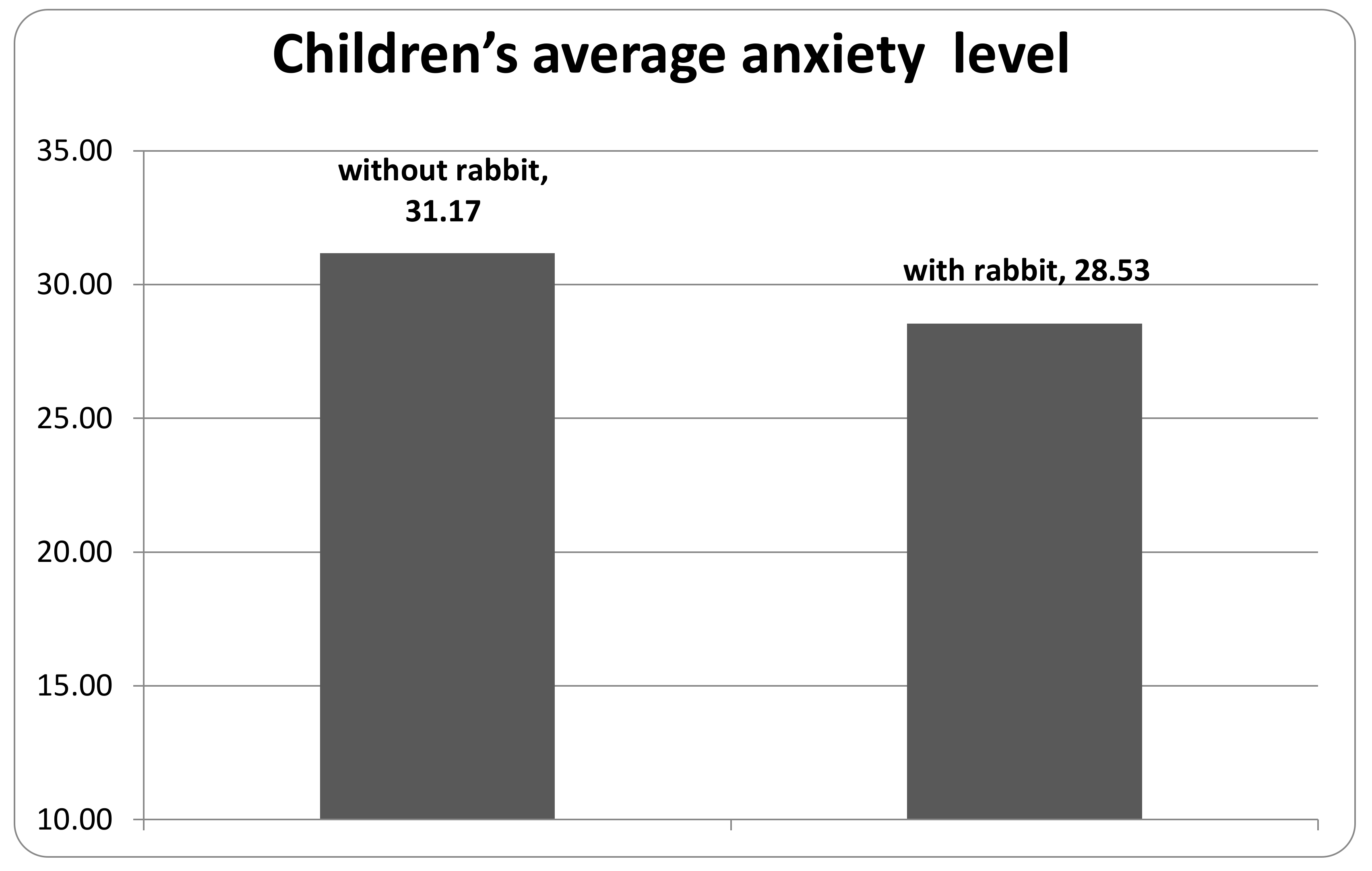 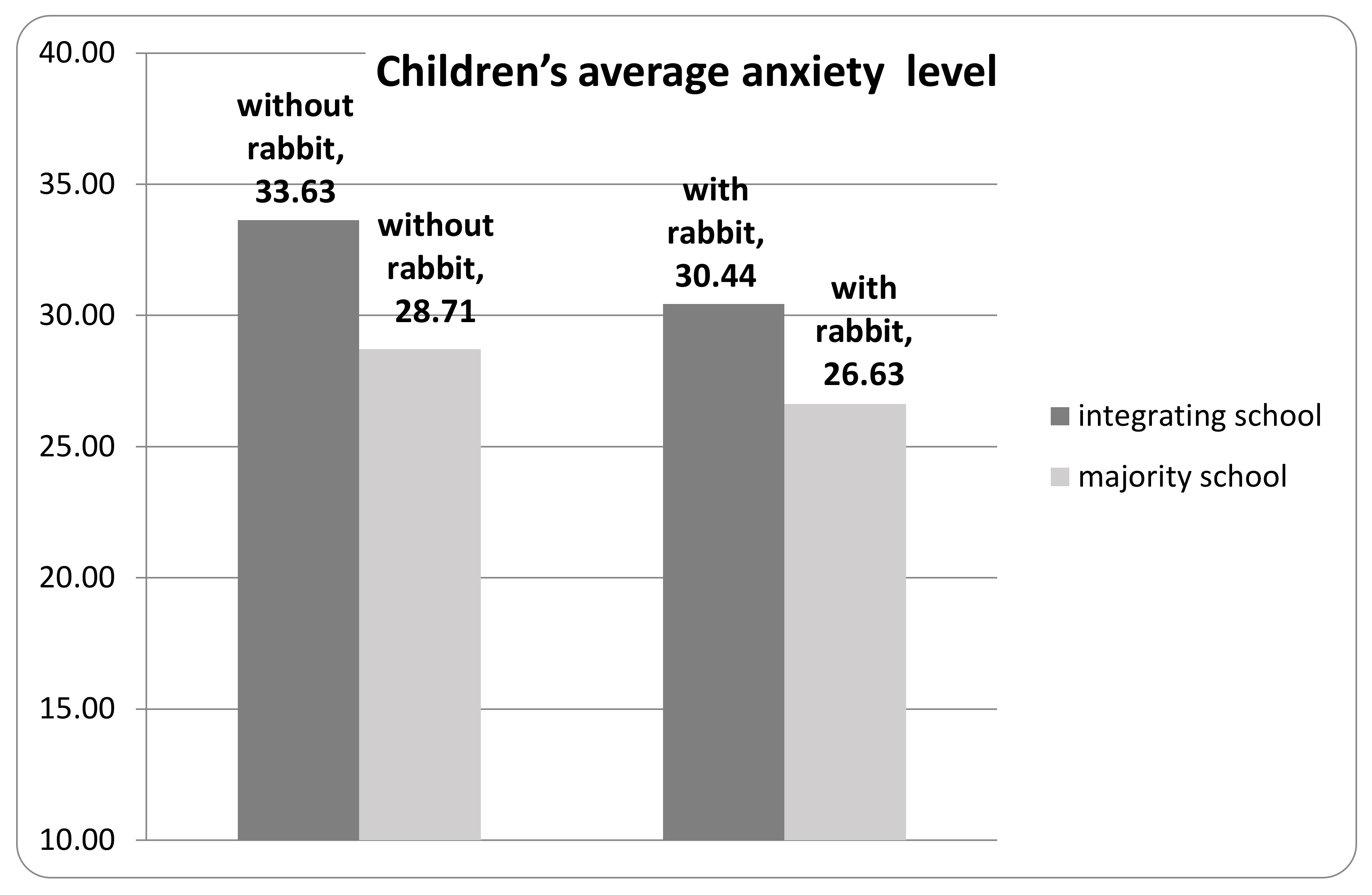 Table 4. Group of normal stress level children.
Table 4. Group of normal stress level children.
Ø—rabbitless period, R—rabbit-assisted period, Ø avg—average of rabbitless period, R avg—average of rabbit-assisted period, d (%)—difference in %.
© 2019 by the authors. Licensee MDPI, Basel, Switzerland. This article is an open access article distributed under the terms and conditions of the Creative Commons Attribution (CC BY) license (http://creativecommons.org/licenses/by/4.0/).
We use cookies on our website to ensure you get the best experience. Read more about our cookies here.
Accept
We have just recently launched a new version of our website. Help us to further improve by taking part in this short 5 minute survey here. here.
Never show this again