Dual purpose chickens are one solution to the killing of male day-old chickens from the layer strains. However, modern laying hen husbandry faces further challenges, for instance, the frequent occurrence of injurious pecking. This behavior is seen as a sign of stress in the offending birds, it causes pain and damage in the victims, and thus impairs the health and welfare of the whole flock. In this study, the behavior of conventional laying hens and dual-purpose hens was evaluated comparatively by assessing the status of their feathers and skin over time. All hens were housed and managed under semi-commercial conditions. Severe feather loss and skin lesions due to injurious pecking only occurred in the conventional layer flocks. Therefore, keeping dual-purpose hens may also be an alternative approach to overcome damaging behaviors in laying hen husbandry.

Dual-purpose strains, with hens housed for egg laying and roosters kept for meat production are one alternative to the killing of male day-old chickens. However, dual-purpose hens seem to have additional advantages compared to conventional layers, for instance, a lower tendency to develop behavioral disorders, such as feather pecking and cannibalism. In the present study, three batches of about 1850 conventional layers (Lohmann Brown plus, LB+) and 1850 dual-purpose hens (Lohmann Dual, LD) each, all of them with untrimmed beaks, were observed during production (20–71 (56) weeks of life) in a semi-commercial aviary system. The aim was to investigate whether the hybrid and batch affected the occurrence of injurious pecking, and to identify a detailed time course of the damage caused by this behavior. Therefore, the hens’ plumage and skin condition were assessed as an indicator by means of a visual scoring method. The LB+ hens had higher production performances and higher mortality rates compared to the LD hens. Plumage loss in the LB+ flocks started at 23 to 25 weeks of age, and deteriorated continuously. The LD hens showed only moderate feather loss on the head/neck region, which started at 34 to 41 weeks and remained almost constant until the end of the observations. Compared to feather loss, injuries occurred in the LB+ hens with a delay of several weeks, with a maximum of 8% to 12% of hens affected. In contrast, skin injuries were observed only sporadically in single LD hens. In all batches, hybrid had an effect on the occurrence of feather loss (p < 0.05). Within the LB+ strain, the proportions of hens affected by plumage loss and injuries differed among batches (p < 0.05), whereas this was not the case in the LD flocks. Thus, severe feather pecking and cannibalism seemed to occur in the conventional layer hybrids but not in the dual-purpose hens, though both genetic strains were raised and managed under the same semi-commercial conditions. Therefore, keeping dual-purpose hens should also be considered as an alternative approach to avoid injurious pecking in laying hen husbandry. View Full-Text
Keywords: animal welfare; laying hens; plumage loss; integument damage; injury; feather pecking; cannibalism animal welfare; laying hens; plumage loss; integument damage; injury; feather pecking; cannibalism
►▼ Show Figures 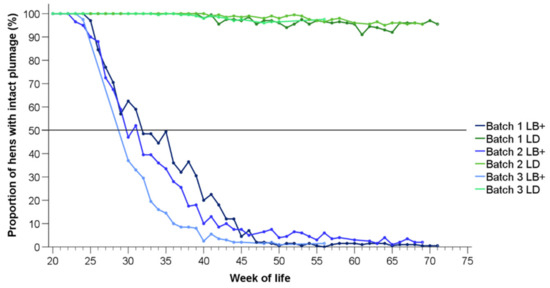