Association between Gut Microbiota and Development of Gestational Diabetes Mellitus

The gut microbiota has been intensively investigated in the last decade and, as a result, it is now clear that gut dysbiosis, which is caused by an abnormal composition of the gut microbiota and abnormal concentrations of their metabolites, can lead to the development of various gastrointestinal and systemic diseases [1,2,3,4]. Therefore, eubiosis is now regarded as essential to maintain the health of the host.
A growing body of evidence suggests that exercise can alter the composition of the gut microbiota and their metabolites. In general, simple, regular exercise can be beneficial for the gut microbiota. For example, increases in the abundance of butyrate-producing bacteria and the concentration of butyrate were observed in human feces following physical exercise [5]. Butyrate in the gut has been demonstrated to confer various health benefits to the host, including regulation of cell proliferation and differentiation and anti-inflammatory [6]. In addition, exercise has been shown to help increase the alpha-diversity in the gut microbiota of both animals and humans [7,8]. For example, Allen, et al. [9] reported that exercise-induced changes in the gut microbiota was likely associated with lower gut inflammation in a mouse model.
Paradoxically, some studies have reported potential adverse effects of exercise on the gut microbiota. For instance, Jang [10] reported that a reduced number of beneficial bacteria such as Bifidobacterium and butyrate-producing bacteria dwelt inside the gut of male bodybuilding athletes than in those not engaged in this physical activity. Recently, we also found that succinate, a metabolite of the gut microbiota that possibly causes gut inflammation and diarrhea, accumulated in the feces of female elite endurance runners when compared with age-matching but non-athlete females [11]. Those adverse exercise effects were likely caused by factors such as altered gut motility and transit, resulting from strenuous physical and psychological efforts [12,13]. In addition, site-specific oxidative stress and intestinal injury, resulting from exercise-induced repeated ischemia-reperfusion, are also likely factors leading to gut dysbiosis [14].
The composition of the diets of athletes may also cause gut dysbiosis. For example, athletes are recommended to consume high amounts of monosaccharides to maximize the storage of glycogen and sustain the level of blood glucose during exercise [15]. Moreover, to satisfy their muscle accretion needs, the ingestion of animal protein ingestion is high in athletes [10,16,17]. However, to prevent gastrointestinal disturbances, they can also be advised to lower their intake of dietary fiber [10,18]. According to Jang et al. [10], an unbalanced micronutrition, ensuing from a high-protein, low-dietary fiber diet, can decrease the number of beneficial bacteria in the gut microbiota of bodybuilders.
In the case of elite professional rugby players, the ideal composition of their gut microbiotas should include a high diversity and abundance of beneficial bacteria such as Roseburia spp. [16]. Clarke et al. [16] reported that the levels of inflammation and metabolic markers in the blood of elite rugby players were equal to or better than those of healthy non-players. By contrast, metabolic markers such as low-density lipoprotein (LDL) cholesterol in blood, as well as the prevalence of non-alcoholic fatty liver disease (NAFLD) are higher in university rugby players than in that of control subjects [19].
A recent study reported gut dysbiosis as a potential cause of NAFLD [20]. In addition, a brief-type self-administered diet history questionnaire (BDHQ) to university rugby players performed in previous work found that the average dietary fiber intake was about 12 g/day, which is less than one-third that of the professional rugby players (39 g/day) [16]. Furthermore, the data showed that the feces of 76% (42/55) of university rugby players were loose (Bristol stool scale type 5, 6, or 7), suggesting a diarrheic pattern, and 78% (43/55) reported to have an urgency to defecate more than once per week. Based on this previous evidence, we hypothesized that the gut microbiotas of university rugby players might have been in a dysbiotic state. To confirm this hypothesis, we analyzed the microbiotas and the concentrations of organic acids in fecal samples from other university rugby players and those from age-matching, non-rugby playing males and compared the results.

This study was approved by the Ethical committee of Setsunan University and conducted as per their guidelines (approval number: 2020-037, approval date: 25 November 2020). Written informed consents were obtained from all participants.
The enrollment of subjects and sample collection were conducted from December 2020 to February 2021. Eighty-eight male rugby players from Setsunan University were chosen and assigned to a group named university rugby players (URP). Of these players, 57 were forwards (FWs) and 31 backs (BKs). The requisites used to consider a participant for the URP group were as follows: (1) healthy male belonging to Setsunan university’s rugby team; (2) regularly participating in the team’s practices (at least 6 days per week, 3 h per day) and (3) with no previously diagnosed gastrointestinal disorders. Twenty healthy male students, also with no previously diagnosed gastrointestinal disorders, from the same university but not accustomed to exercise regularly, were recruited for the control group. Although higher BMIs were expected in URP (>25) than in controls based on previous studies [18,19], no BMI adjustment was conducted in the present study. The reason for this is “healthy” was a solid requisite for selecting participants, while participants not conducting regular exercise and had BMI higher than 25 are categorized as overweight or obese [21].
All participants provided fecal samples to the study, which were collected by themselves with ad-hoc scoop and container sets (Sarstedt K.K., Tokyo, Japan). The fecal samples were kept at 4 °C at all times and brought to our facilities within 24 h after collection. After reception, the fecal samples were stored at −20 °C or lower.

2.2. Analysis of the Fecal Microbiota

Fecal DNA extraction, library preparation and deep sequencing using an MiSeq apparatus (Illumina K.K., Tokyo, Japan) were conducted as previously described [22]. Briefly, fecal DNA was extracted from 25 mg of feces by QuickGene DNA Tissue kit SII (KURABO, Osaka, Japan). The V3-4 region of 16S rRNA genes in each sample was amplified by primers 341F and 805R containing 5′ overhang adapter sequence for 2nd PCR. The amplicon was purified by NucleoFast 96 PCR plates (TaKaRa bio, Shiga, Japan) and a unique combination of dual indices (I5 and I7 index) was attached by 2nd PCR. After purification of the amplicons, concentration of each sample was normalized with a SequelPrep Normalization Plate Kit (Thermo Fisher, Tokyo, Japan) and pooled and concentrated by AMPure XP beads (Beckman Coulter, Tokyo, Japan). Ten pM of the library combined with 20% of phiX Control (Illumina) was sequenced with a 285-bp paired-end bases on the MiSeq using MiSeq Reagent Kit v3 (600 cycles; Illumina).
Sequence data analysis was carried out as previously reported [23] with minor modifications. Demultiplex was performed by Quantitative Insights Into Microbial Ecology (QIIME ver.1.9.1) software [24]. Quality filtering, dereplication, singleton removal was performed using VSEARCH (ver. 2.15.1) [25], and clustering OTU and chimera check were conducted by USEARCH (ver.9.2.64) [26] and UCHIME2 [27], respectively. Taxonomy assignment of each OTU was carried out by RDP classifier (ver.2.2) [28] with the Greengenes database (13_8). Alpha and beta diversity analyses were conducted using R package “phyloseq (ver.1.30.0)” [29].

2.3. Analysis of the Concentrations of Fecal Organic Acids

In two group comparisons (FWs vs. BKs and URP vs. control), differences in alpha-diversity and the concentrations of fecal organic acids were evaluated by the Welch’s t-test. The relative abundances of bacterial genera were compared using the Wilcoxon rank sum test. The beta diversity of the fecal microbiota were compared with a permutational multivariate analysis of variance (PERMANOVA) by QIIME. All values are expressed as the means ± the standard deviations. Differences between the means were considered to be significant if p < 0.05. All statistical analyses were carried out using R (ver.4.0.2), unless otherwise specified.

3.1. Corrections of the Experimental Groups

The fecal sample of one participant in the control group was excluded from the present study because diarrheic stool was submitted (met exclusion criteria of control subject). Hence, the number of participants in the control group totaled 19. Body mass indices were significantly different between groups (Table 1). Comparisons of the alpha- and beta-diversity in the fecal microbiota and the concentrations of organic acids did not find significant differences between the subgroups FWs and BKs (Supplement Table S1 and Supplement Figure S1). Therefore, as in the study by Clarke et al. [16], all rugby players were treated as one single group.

3.2. Analysis of the Fecal Microbiota

In conclusion, in the present work, the low richness and high relative abundances of possible pathobiont bacterial genera in the microbiota of university male rugby players, along with abnormal concentrations of organic acids in their fecal samples, seemed to imply a dysbiotic status of their gut microbiota. Taken together, the gathered data seemed to be self-explanatory of the fact that university rugby players suffered from constant loose stool and urgency to defecate above average. No evaluation of the nutritional intake in subjects enrolled in the present study was carried out. However, based on daily calorie intake, the dietary fiber intake by URP was probably lower than that of controls. This conjecture seems to be confirmed by the high abundance of Collinsella in the feces of URP, implying the nonexistence of eubiosis. To better define the relationship between exercise, dietary fiber and the gut environment, well-controlled background and nutritional intake evaluations of participants are recommended for future studies. An ongoing study at this laboratory is investigating the effect of dietary intervention, including the use of prebiotics, on the dysbiotic guts of university male rugby players.

The study was conducted according to the guidelines of the Declaration of Helsinki, and approved by the Institutional Review Board (approval number: 2020-037, approval date: 25 November 2020).

The sequence data have been deposited in the DDBJ Sequence Read Archive (DRA) under accession number DRA012258 (available from 1 August 2021). 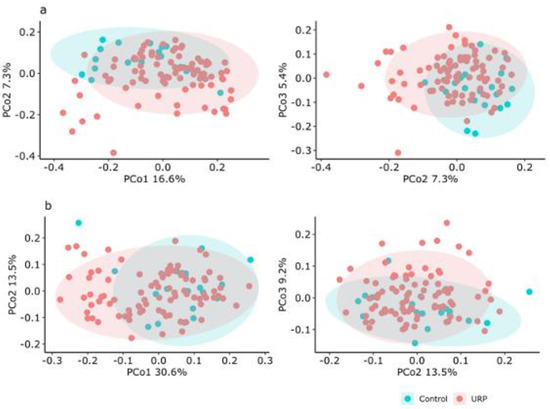 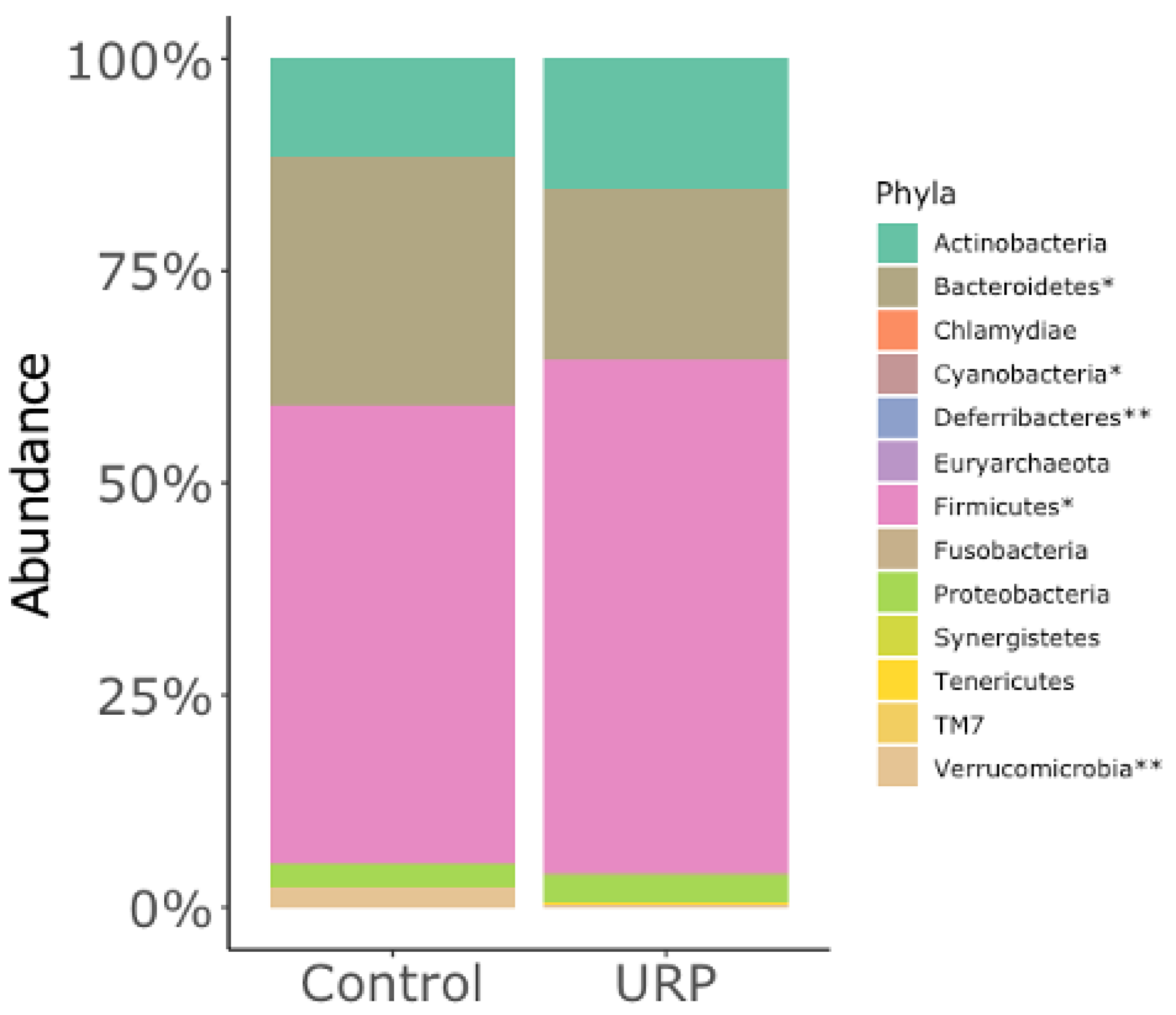