Bile Salt Hydrolases: At the Crossroads of Microbiota and Human Health

Further Studies on the 3-Ketosteroid 9α-Hydroxylase of Rhodococcus ruber Chol-4, a Rieske Oxygenase of the Steroid Degradation Pathway

The biochemistry and genetics of the bacterial steroid catabolism have been extensively studied during the last years and their findings have been essential to the development of biotechnological applications. For instance, metabolic engineering of the steroid-eater strains has allowed to obtain intermediaries of industrial value. However, there are still some drawbacks that must be overcome, such as the redundancy of the steroid catabolism genes in the genome and a better knowledge of its genetic regulation. KshABs and KstDs are key enzymes involved in the aerobic breakage of the steroid nucleus. Rhodococcus ruber Chol-4 contains three kshAs genes, a single kshB gene and three kstDs genes within its genome. In the present work, the growth of R. ruber ΔkshA strains was evaluated on different steroids substrates; the promoter regions of these genes were analyzed; and their expression was followed by qRT-PCR in both wild type and ksh mutants. Additionally, the transcription level of the kstDs genes was studied in the ksh mutants. The results show that KshA2B and KshA1B are involved in AD metabolism, while KshA3B and KshA1B contribute to the cholesterol metabolism in R. ruber. In the kshA single mutants, expression of the remaining kshA and kstD genes is re-organized to survive on the steroid substrate. These data give insight into the fine regulation of steroid genes when several isoforms are present. View Full-Text
Keywords: 3-ketosteroid 9α-hydroxylase; steroids; Rhodococcus ruber; AD; ADD 3-ketosteroid 9α-hydroxylase; steroids; Rhodococcus ruber; AD; ADD
►▼ Show Figures 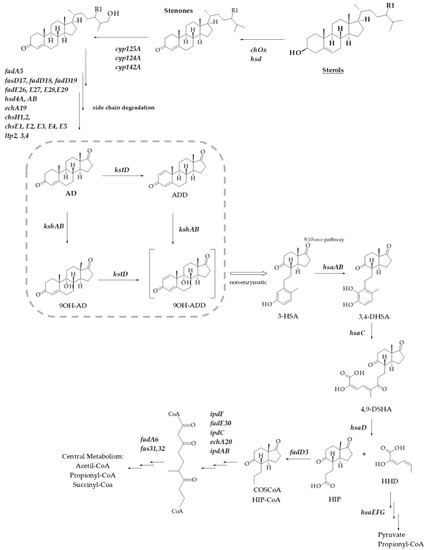 Sara Baldanta
Bachelor’s graduate in Biotechnology from the University of Valencia (2014). During my research experience, I have worked in different areas: genetic improvement of fungi, study of enzymes with industrial interest and immune response against poxvirus. Currently, I am doing a PhD in Biochemistry and Molecular Biology. My thesis project focuses on the study and development of genetic tools in actinobacteria and cyanobacteria of biotechnological interest.

Juana María Navarro Llorens
Dr. Navarro Llorens J.M. is an Assistant Professor at the Biochemistry and Biology Department, UCM (Spain) and she is IP of the Metabolic Engineering group. Her professional interest mainly lies in the Bacterial Genetics and Biotechnology field. She has been coordinating the Iberoamerican CYTED Network Renuwal since the beginning of 2020. For further information, her ORCID reference is 0000-0002-8181-3147 and her Research ID H-2933-2015.

Govinda Guevara
Molecular Biologist with a specialization in Biotechnology and Metabolic Engineering. I am a broadly trained and highly experienced biologist with more than 25 years of professional research, managing, and technical experience. I have worked two years in the biotechnology agronomical field as a project manager. Currently, I am working on the development of gene editing systems (CRISPR) for their biotechnological use in actinobacteria and cyanobacteria.
Zoom | Orient | As Lines | As Sticks | As Cartoon | As Surface | Previous Scene | Next Scene
We use cookies on our website to ensure you get the best experience. Read more about our cookies here.
Accept
We have just recently launched a new version of our website. Help us to further improve by taking part in this short 5 minute survey here. here.
Never show this again