HIV-1 Entry and Prospects for Protecting against Infection

Colonization by the benign tapeworm, Hymenolepis diminuta, has been associated with a reduction in intestinal inflammation and changes in bacterial microbiota. However, the role of microbiota in the tapeworm anti-inflammatory effect is not yet clear, and the aim of this study was to determine whether disruption of the microflora during worm colonization can affect the course of intestinal inflammation. We added a phase for disrupting the intestinal microbiota using antibiotics to the experimental design for which we previously demonstrated the protective effect of H. diminuta. We monitored the immunological markers, clinical parameters, bacterial microbiota, and histological changes in the colon of rats. After a combination of colonization, antibiotics, and colitis induction, we had four differently affected experimental groups. We observed a different course of the immune response in each group, but no protective effect was found. Rats treated with colonization and antibiotics showed a strong induction of the Th2 response as well as a significant change in microbial diversity. The microbial results also revealed differences in the richness and abundance of some bacterial taxa, influenced by various factors. Our data suggest that interactions between the tapeworm and bacteria may have a major impact on its protective effect. View Full-Text
Keywords: Hymenolepis diminuta; helminth; intestinal inflammation; colitis; bacterial microbiota; microbial changes; immune markers Hymenolepis diminuta; helminth; intestinal inflammation; colitis; bacterial microbiota; microbial changes; immune markers
►▼ Show Figures 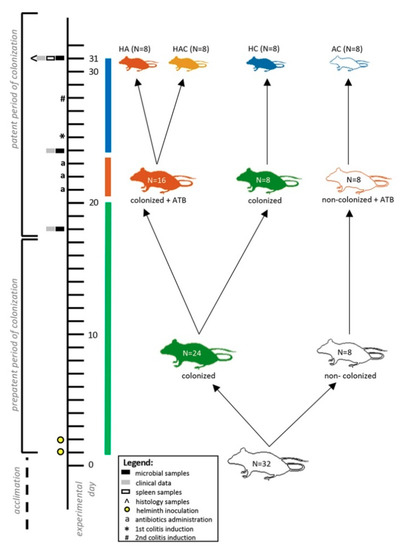