Microbial Communities in Soils and Endosphere of Solanum tuberosum L. and their Response to Long-Term Fertilization
Previous Article in Journal

Does Biological Denitrification Inhibition (BDI) in the Field Induce an Increase in Plant Growth and Nutrition in Apium graveolens L. Grown for a Long Period?

Intensive agriculture uses a lot of nitrogen fertilizers to increase crop productivity. These crops are in competition with soil-denitrifying microorganisms that assimilate nitrogen in the form of nitrate and transform it into N2O, a greenhouse gas, or N2. However, certain plant species exude secondary metabolites, called procyanidins, which inhibit denitrifiers and increase the nitrate pool in the soil available for plant nutrition. This phenomenon is called biological denitrification inhibition. Previously, we showed that the addition of exogenous procyanidins to a lettuce crop induces denitrifier inhibition and increases nitrate content in the soil, affecting lettuce morphological traits. Here, the effects of procyanidin amendments in the field on a more long-term and nitrogen-consuming crop species such as celery were tested. The effects of procyanidin amendment on celery growth with those of conventional ammonium nitrate amendments were, therefore, compared. Denitrification activity, nitrate concentration, the abundance of denitrifying bacteria in the soil, and traits related to celery growth were measured. It was shown that the addition of procyanidins inhibits denitrifiers and increases the soil nitrate level, inducing an improvement in celery morphological traits. In addition, procyanidin amendment induces the lowest nitrogen concentration in tissues and reduces N2O emissions. View Full-Text
Keywords: biological denitrification inhibition (BDI); celery; fertilizers; procyanidins; nitrogen; plant traits biological denitrification inhibition (BDI); celery; fertilizers; procyanidins; nitrogen; plant traits
►▼ Show Figures 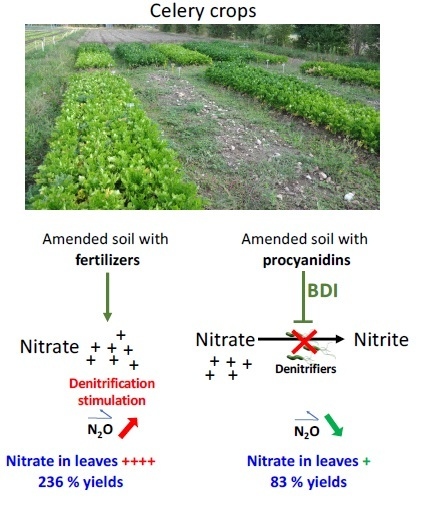