Pseudomonas syringae is a ubiquitous plant pathogen, infecting both woody and herbaceous plants and resulting in devastating agricultural crop losses. Characterized by a remarkable specificity for plant hosts, P. syringae pathovars utilize a number of virulence factors including the type III secretion system and effector proteins to elicit disease in a particular host species. Here, two Pseudomonas syringae strains were isolated from diseased Populustrichocarpa seeds. The pathovars were capable of inhibiting poplar seed germination and were selective for the Populus genus. Sequencing of the newly described organisms revealed similarity to phylogroup II pathogens and genomic regions associated with woody host-associated plant pathogens, as well as genes for specific virulence factors. The host response to infection, as revealed through metabolomics, is the induction of the stress response through the accumulation of higher-order salicylates. Combined with necrosis on leaf surfaces, the plant appears to quickly respond by isolating infected tissues and mounting an anti-inflammatory defense. This study improves our understanding of the initial host response to epiphytic pathogens in Populus and provides a new model system for studying the effects of a bacterial pathogen on a woody host plant in which both organisms are fully genetically sequenced. View Full-Text
Keywords: Pseudomonas; virulence; pathogen; metabolomics; germination Pseudomonas; virulence; pathogen; metabolomics; germination
►▼ Show Figures 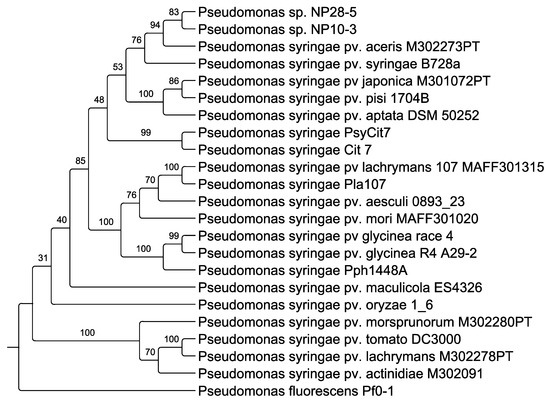