Colorectal cancer (CRC) is one of the most common forms of cancer. Its onset from chronic inflammation is widely accepted. Moreover, dysbiosis plays an undeniable role, thus the use of probiotics in CRC has been suggested. They exhibit both anti- and pro-inflammatory properties and restore balance in the microbiota. The aim of this study was to investigate the immunomodulatory properties of six lactobacilli with probiotic features in an in vitro model of macrophage-like cells and to test these pooled probiotics for their anti-tumour properties in a chemically induced CRC model using Wistar male rats. Upon co-culture of M1- and M2-like macrophages with lactobacilli, cytokine release (TNF-α, IL-1β, IL-18, IL-23) and phagocytic activity using fluorescent-labelled bacteria were tested. The effects of orally administered probiotics on basic cancer and immune parameters and cytokine concentration (TNF-α, IL-1β, IL-18) in colon tumours were studied. Tested lactobacilli exhibited both pro- and anti-inflammatory properties in in vitro conditions. In vivo study showed that the administration of probiotics was able to decrease multiplicity, volume and total tumour numbers, restore colon length (p < 0.05) and increase IL-18 production (p < 0.05) in tumour tissue. These data indicate both an immunomodulatory effect of probiotics on distinct macrophage subsets and a protective effect against chemically-induced CRC. View Full-Text
Keywords: Lactobacillus salivarius; Lactobacillus plantarum; cytokines; immunomodulation; Wistar rat; 1,2-dimethylhydrazine Lactobacillus salivarius; Lactobacillus plantarum; cytokines; immunomodulation; Wistar rat; 1,2-dimethylhydrazine
►▼ Show Figures 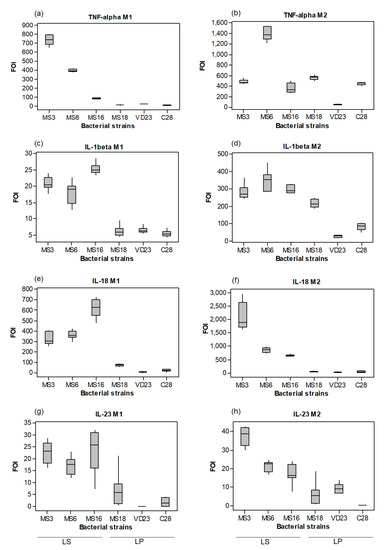