Rathayibacter toxicus is a Gram-positive, nematode-vectored bacterium that infects several grass species in the family Poaceae. Unique in its genus, R. toxicus has the smallest genome, possesses a complete CRISPR-Cas system, a vancomycin-resistance cassette, produces tunicamycin, a corynetoxin responsible for livestock deaths in Australia, and is designated a Select Agent in the United States. In-depth, genome-wide analyses performed in this study support the previously designated five genetic populations, with a core genome comprising approximately 80% of the genome for all populations. Results varied as a function of the type of analysis and when using different bioinformatics tools for the same analysis; e.g., some programs failed to identify specific genomic regions that were actually present. The software variance highlights the need to verify bioinformatics results by additional methods; e.g., PCR, mapping genes to genomes, use of multiple algorithms). These analyses suggest the following relationships among populations: RT-IV ↔ RT-I ↔ RT-II ↔ RT-III ↔ RT-V, with RT-IV and RT-V being the most unrelated. This is the most comprehensive analysis of R. toxicus that included populations RT-I and RT-V. Future studies require underrepresented populations and more recent isolates from varied hosts and geographic locations. View Full-Text
Keywords: Rathayibacter toxicus; annual ryegrass toxicity; flood plain staggers; Stuart’s range syndrome; comparative genomics; populations Rathayibacter toxicus; annual ryegrass toxicity; flood plain staggers; Stuart’s range syndrome; comparative genomics; populations
►▼ Show Figures 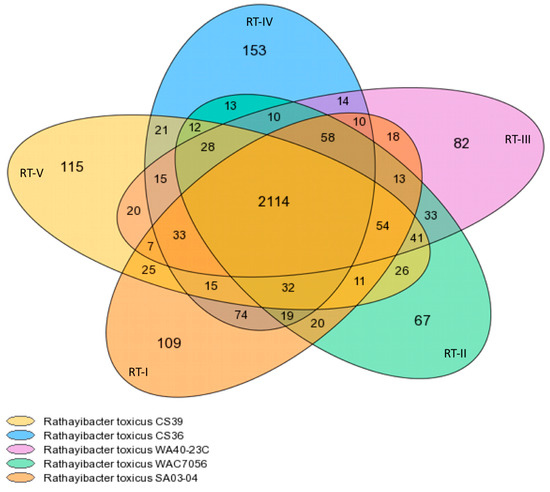