Under a one health perspective and the worldwide antimicrobial resistance concern, we investigated extraintestinal pathogenic Escherichia coli (ExPEC), uropathogenic E. coli (UPEC), and multidrug resistant (MDR) E. coli from 197 isolates recovered from healthy dogs in Spain between 2013 and 2017. A total of 91 (46.2%) isolates were molecularly classified as ExPEC and/or UPEC, including 50 clones, among which (i) four clones were dominant (B2-CH14-180-ST127, B2-CH52-14-ST141, B2-CH103-9-ST372 and F-CH4-58-ST648) and (ii) 15 had been identified among isolates causing extraintestinal infections in Spanish and French humans in 2015 and 2016. A total of 28 (14.2%) isolates were classified as MDR, associated with B1, D, and E phylogroups, and included 24 clones, of which eight had also been identified among the human clinical isolates. We selected 23 ST372 strains, 21 from healthy dogs, and two from human clinical isolates for whole genome sequencing and built an SNP-tree with these 23 genomes and 174 genomes (128 from canine strains and 46 from human strains) obtained from public databases. These 197 genomes were segregated into six clusters. Cluster 1 comprised 74.6% of the strain genomes, mostly composed of canine strain genomes (p < 0.00001). Clusters 4 and 6 also included canine strain genomes, while clusters 2, 3, and 5 were significantly associated with human strain genomes. Finding several common clones and clone-related serotypes in dogs and humans suggests a potentially bidirectional clone transfer that argues for the one health perspective. View Full-Text
Keywords: Escherichia coli; dogs; virulence genes; antibiotic resistance; WGS; ST372; clonal structure Escherichia coli; dogs; virulence genes; antibiotic resistance; WGS; ST372; clonal structure
►▼ Show Figures 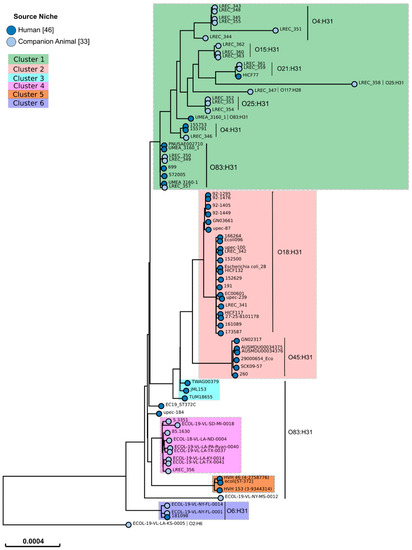