Phylogenetic Placement of Isolates Within the Trans-Eurasian Clade A.Br.008/009 of Bacillus anthracis

Anthrax is a serious infectious disease caused by the gram-positive and spore-forming bacterium Bacillus anthracis. In Italy, anthrax is an endemic disease with sporadic cases each year and few outbreaks, especially in Southern Italy. However, new foci have been discovered in zones without previous history of anthrax. During summer 2016, an outbreak of anthrax caused the death of four goats in the Abruzzo region, where the disease had not been reported before. In order to investigate the outbreak, we sequenced one strain and compared it to 19 Italian B. anthracis genomes. Furthermore, we downloaded 71 whole genome sequences representing the global distribution of canonical SNP lineages and used them to verify the phylogenetic positioning. To this end, we analyzed and compared the genome sequences using canonical SNPs and the whole genome SNP-based analysis. Our results demonstrate that the outbreak strain belonged to the Trans-Eurasian (TEA) group A.Br.011/009, which is the predominant clade in Central-Southern Italy. In conclusion, the high genomic relatedness of the Italian TEA strains suggests their evolution from a common ancestor, while the spread is supposedly driven by trade as well as human and transhumance activities. Here, we demonstrated the capabilities of whole genome sequencing (WGS), which can be used as a tool for outbreak analyses and surveillance activities. View Full-Text
Keywords: B. anthracis; outbreak; WGS; canSNPs B. anthracis; outbreak; WGS; canSNPs
►▼ Show Figures 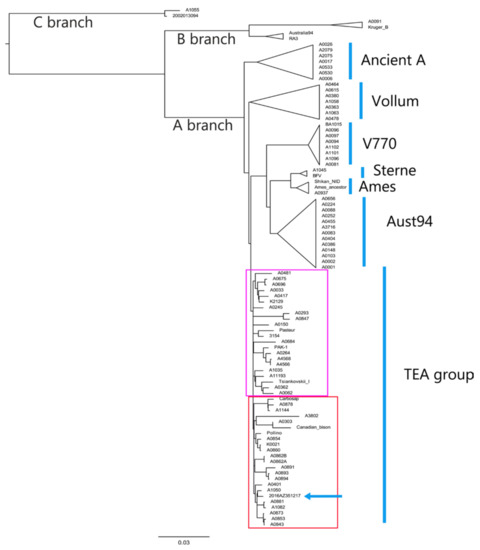