Marine fungi associated with macroalgae are an ecologically important group that have a strong potential for industrial applications. In this study, twenty-two marine fungi isolated from the brown seaweed Fucus sp. were examined for their abilities to produce algal and plant biomass degrading enzymes. Growth of these isolates on brown and green algal biomass revealed a good growth, but no preference for any specific algae. Based on the analysis of enzymatic activities, macroalgae derived fungi were able to produce algae specific and (hemi-)cellulose degrading enzymes both on algal and plant biomass. However, the production of algae specific activities was lower than the production of cellulases and xylanases. These data revealed the presence of different enzymatic approaches for the degradation of algal biomass by macroalgae derived fungi. In addition, the results of the present study indicate our poor understanding of the enzymes involved in algal biomass degradation and the mechanisms of algal carbon source utilization by marine derived fungi. View Full-Text
Keywords: seaweed biomass; enzymes; algal polysaccharides; marine fungi seaweed biomass; enzymes; algal polysaccharides; marine fungi
►▼ Show Figures 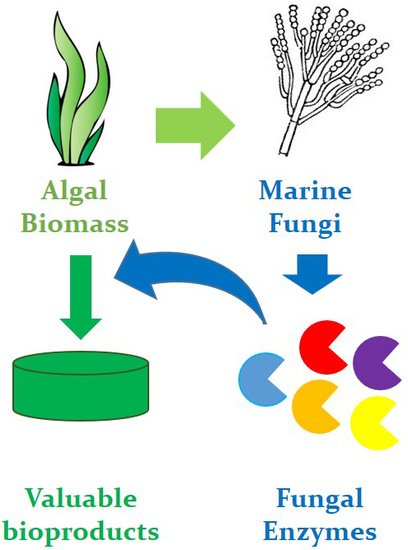