Phenotypes Associated with Pathogenicity: Their Expression in Arctic Fungal Isolates

Around 85% of the environments on Earth are permanently or seasonally colder than 5 °C. Among those, the poles constitute unique biomes, which harbor a broad variety of microbial life, including an abundance of fungi. Many fungi have an outstanding ability to withstand extreme conditions and play vital ecosystem roles of decomposers as well as obligate or facultative symbionts of many other organisms. Due to their dispersal capabilities, microorganisms from cryosphere samples can be distributed around the world. Such dispersal involves both species with undefined pathogenicity and potentially pathogenic strains. Here we describe the isolation of fungal species from pristine Arctic locations in Greenland and Svalbard and the testing of the expression of characteristics usually associated with pathogenic species, such as growth at 37 °C, hemolytic ability, and susceptibility to antifungal agents. A total of 320 fungal isolates were obtained, and 24 of the most abundant and representative species were further analyzed. Species known as emerging pathogens, like Aureobasidium melanogenum, Naganishia albida, and Rhodotorula mucilaginosa, were able to grow at 37 °C, showed beta-hemolytic activity, and were intrinsically resistant to commonly used antifungals such as azoles and echinocandins. Antifungal resistance screening revealed a low susceptibility to voriconazole in N. albida and Penicillium spp. and to fluconazole in Glaciozyma watsonii and Glaciozyma-related taxon. View Full-Text
Keywords: Arctic; fungi; emerging pathogens; thermotolerance; hemolysis; antifungal resistance Arctic; fungi; emerging pathogens; thermotolerance; hemolysis; antifungal resistance
►▼ Show Figures 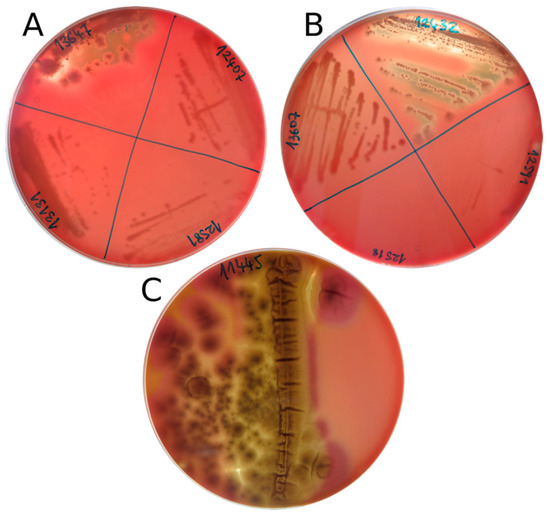