Many inflammatory, autoimmune, metabolic, neoplastic, and neurodegenerative diseases are associated with compositional and functional alterations of the gut microbiota, known as dysbiosis. Dysbiosis is usually characterised by these two major features: (1) The reduction or complete loss of commensals. The depletion of commensals leads to decreased microbiota diversity, which is associated with many immune-mediated and metabolic disorders [1]. For example, a decrease in butyrate-producing Clostridiales is strongly correlated with the severity of inflammatory bowel disease (IBD) [2,3]. (2) The overgrowth of potentially pathogenic microbiota (pathobionts). In a healthy gut ecosystem, pathobionts represent a relatively low percentage of gut microbiota. However, in many immune-mediated diseases, the pathobionts outgrow other commensals. For example, the outgrowth of Gram-negative bacteria from the Enterobacteriaceae family, a subgroup of Proteobacteria phylum, is frequently observed in both IBD patients [4] and mouse models of IBD [5]. The bloom of Proteobacteria is associated with many other diseases, and an increased abundance of Proteobacteria is suggested as a potential diagnostic marker of dysbiosis and the risk of disease [6].
Dysbiosis might be caused by host-derived factors such as genetic background, health status (infection, inflammation), and lifestyle habits or, even more importantly, by environmental factors such as diet (high in sugars, low in fibre), xenobiotics (antibiotics, medication, food additives, chlorinated water), or hygienic environment.
The dysbiotic microbiota can influence the host immune system and mucosal integrity via various mechanisms. These mechanisms include the modulation of inflammasome signalling through microbial metabolites, the modulation of Toll-like receptor (TLR) and NOD-like receptor (NLR) signalling, the degradation of secretory IgA (sIgA), shifting the balance between regulatory and pro-inflammatory T cell subsets, direct mucolytic activity, and others [7].
Whether dysbiosis is a direct cause of immune-mediated and metabolic diseases or merely reflects disease-associated changes in the host’s immune system remains unclear, but there are many examples including type 1 diabetes [8] and Parkinson’s disease [9] where the alterations in gut microbiota precede the onset of illness. Moreover, microbiota transfers from gnotobiotic to germ-free mice show that it is possible to transfer disease phenotype suggesting a causative role of gut microbiota in the pathogenesis of immune-mediated and metabolic disorders [10,11].

Food additives are naturally occurring or synthetically produced substances which are added to food to prevent microbial growth or undesirable chemical changes. Additives can be used alone or in combination with other methods of food preservation. Food additives can be divided according to their function into several groups. For example, preservatives prevent or inhibit the spoilage of food due to microorganisms, sweeteners are added to foods as a sugar substitute, and emulsifiers allow water and oil to remain mixed together. Common preservatives, i.e., antimicrobial food additives, include benzoic acid and its salts, sorbic acid and its salts, sodium nitrite, calcium propionate, sulphites, and disodium ethylenediaminetetraacetate (EDTA).
Recently, several groups, including ours, published research demonstrating that food additives can alter gut microbiota. Chassaing et al. [12] found that dietary emulsifiers directly alter human gut microbiota composition. The emulsifier-modified microbiota can promote intestinal inflammation when transplanted to germ-free mice. The artificial sweetener Splenda promotes Proteobacteria dysbiosis and increases myeloperoxidase reactivity in ileitis-prone SAMP mice [13]. Irwin et al. [14] showed on four probiotic strains that sulphites inhibit in vitro bacterial growth at concentrations regarded as safe. Another group showed that antimicrobial biopolymer ε-polylysine could trigger transient compositional alterations in the mouse gut microbiome [15]. Lastly, we have found that some human gut microbes, including Bacteroides coprocola, Clostridium tyrobutyricum, and Lactobacillus paracasei, are highly susceptible to antimicrobial food additives. Interestingly, some additive combinations such as a benzoate-nitrite-sorbate mixture exert a notable synergistic effect [16]. However, in vivo studies examining the susceptibility of human gut microbiota to antimicrobial food additives are not available.
Therefore, the main aims of this project were to test the hypothesis that antimicrobial food additives can induce a compositional alteration, i.e., dysbiosis, of human gut microbiota and also to find out whether host genotype plays any role in microbiota susceptibility to additives. To accomplish these goals, we have colonised wild-type and Nod2-deficient C57BL/6 mice with human gut microbiota, supplied them with a mixture of three commonly used antimicrobial additives, and performed detailed metagenomic analyses.

The wild-type (stock number: 000664) and Nod2-deficient (stock number: 005763) C57BL/6 mice were acquired from a commercial vendor (Jackson Laboratories, USA) and bred for several generations in our gnotobiotic facility.
To determine the effect of antimicrobial food additives on the composition of human gut microbiota, “humanised” gnotobiotic mice, i.e., originally germ-free mice colonised with human gut microbiota, were supplied from birth with either sterile water or water supplemented with a mixture of additives. The experimental mice were supplied ad libitum with the standard breeding diet (M-Z extrudate V1126, ssniff, Germany). Second generation (F2) mice at the age of two months were used in experiments. The size of each experimental group was as follows: water-supplied wild-type (n = 5), additive-supplied wild-type (n = 6), water-supplied Nod2-/- (n = 8), and additive-supplied Nod2-/- (n = 6). The study was reviewed and approved by the Animal Care and Use Committee of the Institute of Microbiology of the CAS (approval ID: 77/2014, approval date: 2014-12-19).

Adult germ-free mice were colonised with the faecal gut microbiota of a healthy middle-aged Caucasian donor with no history of autoimmune diseases. The donor participating in the study signed and dated Informed Consent and Faecal Donor Agreement forms. The faecal sample was diluted in reduced phosphate-buffered saline (PBS) in an anaerobic chamber and introduced by gavage into germ-free animals. The procedure was completed within one hour of the collection. The human microbiota-associated mice were bred in plastic Trexler-type isolators and supplied water ad libitum. To assure the proper establishment of the microbiota along the GI tract, animals from later generations were used. Turnbaugh et al. [17] showed that the human gut microbiota could be successfully transferred from generation to generation without a significant drop in diversity. All mice were supplied ad libitum with the standard breeding diet (M-Z extrudate V1126, ssniff, Germany).

2.4. Antimicrobial Food Additives and Their Supplementation

To test the effect of antimicrobial food additives on the composition of gut microbiota, we decided to select the three most frequently used additives, namely sodium benzoate (E211; Cat. #71300), sodium nitrite (E250; Cat. #237213), and potassium sorbate (E202; Cat. #85520). All additives were supplied by Sigma-Aldrich, USA. In preliminary testing, we found that both autoclaving and sterile filtration decreases the efficacy of additives, so in all experiments, untreated additives were used. All additives were sterility tested (no growth in VL broth) upon arrival. The exposure to additives, normalised to mouse weight and water intake, was adjusted to match the maximum estimated daily intake of additives in European populations (Source: Report from the Commission on Dietary Food Additive Intake in the European Union, https://publications.europa.eu). Specifically, 4.8 mg/kg bw/day for benzoate, 0.36 for nitrite, and 19.0 for sorbate. The additive solutions were freshly prepared each week and supplied in drinking water ad libitum.

Fresh faecal samples of 2-month old HMA wild-type and Nod2-/- experimental mice were collected into 2.0-mL pre-cooled eppendorf tubes and kept at −80 °C till analysis. The bacterial genomic DNA was extracted using the PowerFecal DNA isolation kit (Cat. #12830, MO BIO Laboratories, USA). The humic acids which might interact with PCR amplification were removed using PowerClean DNA Clean-Up kit (Cat. #12877, MO BIO, USA). The DNA quality was checked using a standard agarose gel electrophoresis. All samples were diluted to a concentration of 30 ng/µL in the MO BIO’s elution buffer C6 (10 mM Tris) and stored at −80 °C until use in PCR.

PCR of the V3-V4 regions of the 16S rRNA gene and sequencing were performed on the Illumina MiSeq platform following the original Earth Microbiome Project protocols (http://www.earthmicrobiome.org/protocols-and-standards/) initially described by Caporaso et al. [18]. Sequencing was performed using paired-end 150 base reads.

Microbiome bioinformatics was performed using QIIME2 2019.4 [19]. Briefly, raw sequence data were demultiplexed and quality filtered using the q2-demux plugin followed by denoising with DADA2 [20] (via q2-dada2) to identify all observed amplicon sequence variants (ASV). All ASVs were aligned with MAFFT [21] and used to construct a phylogenetic tree with FastTree 2 [22]. Alpha-diversity metrics (observed ASVs, Faith’s Phylogenetic Diversity [23], and Jaccard distance) and principal coordinate analysis (PCoA) were estimated using q2-diversity after samples were rarefied to 22,000 sequences per sample. The taxonomy was assigned to ASVs using the q2-feature-classifier [24] against the Greengenes 13_8 99% OTUs reference sequences [25].
Gneiss analysis was used to identify differentially abundant taxa among groups. To facilitate the analysis, the taxa with a per-sample frequency lower than ten were filtered out. Principal balances were obtained via Ward’s hierarchical clustering using the correlation-clustering command. The log ratios between groups at each node of the tree were calculated using the ilr-hierarchical command. A multivariate response regression model was created by running a linear regression separately on each balance using the ols-regression command. The contributions of genotype, treatment, and gender as covariates to the overall community variation were visualised through a regression summary and dendrogram heatmaps. Balances significantly affected by the covariates were identified as those with a p-value less than 0.05.

The significance of differences in alpha diversity was assessed using a Kruskal–Wallis test with a false discovery rate (FDR) correction, and the significance of differences in beta diversity was assessed using a PERMANOVA analysis [26]. Significant balances in Gneiss analysis were determined by ANOVA. A p-value of ≤0.05 was regarded as significant. The graphs were generated using QIIME2 View web interface or Prism GraphPad 8.0 and annotated in Affinity Designer software.

Neither additive administration nor genotype had any statistically significant effect on mouse weight, water intake, or pellet consumption (Figure 1).

The effects of additives on alpha diversity, i.e., within-sample diversity, were determined using three alpha diversity metrics—observed ASVs, Faith’s phylogenetic index (richness), and Pielou’s index (evenness). Observed ASVs is a qualitative measure of community richness, Faith’s phylogenetic index is a qualitative measure of community richness that incorporates phylogenetic relationships between the ASVs, and Pielou’s index is a measure of community evenness. The richness is the number of different species in a sample, and the evenness is how balanced they are to each other.
Additive treatment decreased the number of ASVs in the gut microbiota of both wild-type and Nod2-/- mice to an average of 70 ASVs. The original number of ASVs was slightly higher in wild-type mice compared to Nod2-/- mice, precisely 94 ASVs and 88 ASVs. The decrease in alpha diversity as quantified by Faith’s phylogenetic index was significant only for the microbiota of wild-type mice (H = 4.8, p = 0.028, Figure 2A). There was no significant change in microbiota evenness (Pielou’s index) in either wild-type or Nod2-/- mice (Figure 2B).

The effects of additives on beta diversity, i.e., between sample diversity, were determined using Jaccard distance metrics, which is a qualitative measure of community dissimilarity.
The principal coordinate analysis showed that the genotype, i.e., Nod2-deficiency, significantly influences gut microbiota composition. The microbiota of wild-type and Nod2-deficient mice clustered separately (p = 0.001 for unweighted UniFrac distance). This finding is not novel. Previously, it had been demonstrated, in cooperation with our group, that Nod2 is essential in the regulation of commensal microbiota [27].
However, both wild-type and Nod2-/- microbiota were highly susceptible to additive treatment. Interestingly, the microbiota of Nod2-/- mice (p = 0.001) was more susceptible to the disturbance by additives compared to the microbiota of wild-type mice (p = 0.005). The remarkable separation of control and additive-treated microbiota is visible in Figure 3.

We would like to thank Radka Stribrna and Jarmila Jarkovska for their invaluable technical support and James Rizzo for editing and proofreading the manuscript. 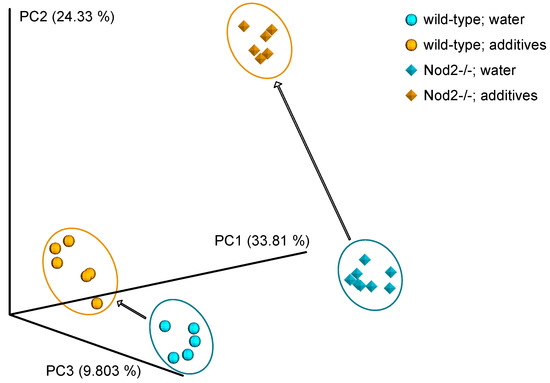 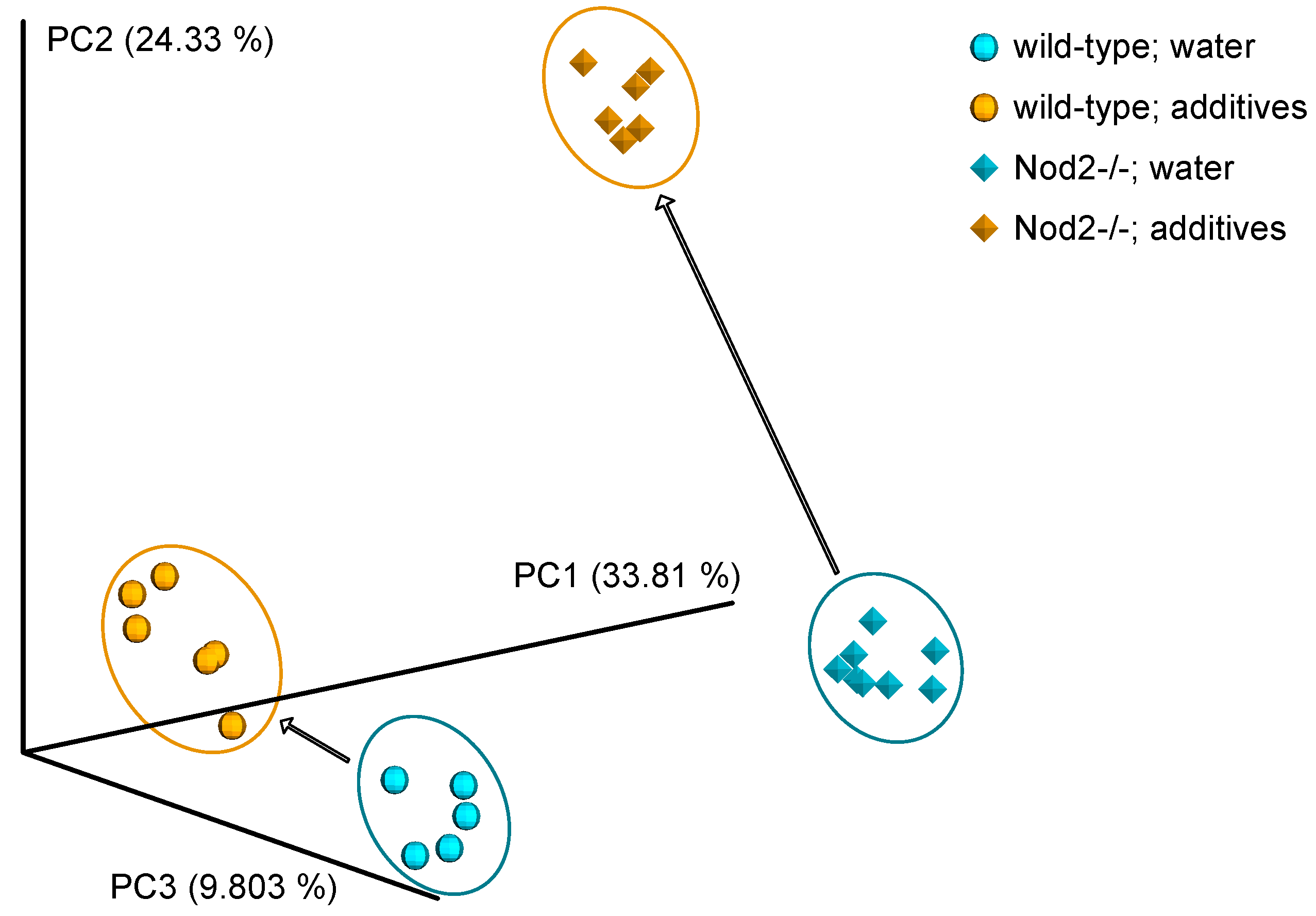 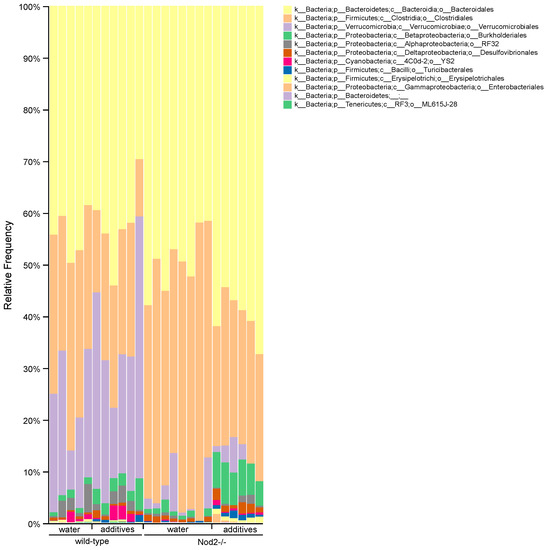