Biofilm Forming Lactobacillus: New Challenges for the Development of Probiotics

Lactic acid bacteria (LAB) are Gram-positive bacteria that are natural inhabitants of the gastrointestinal (GI) tracts of mammals, including humans. Since Mechnikov first proposed that yogurt could prevent intestinal putrefaction and aging, the beneficial effects of LAB have been widely demonstrated. The region between the duodenum and the terminal of the ileum is the primary region colonized by LAB, particularly the Lactobacillus species, and this region is covered by a mucus layer composed mainly of mucin-type glycoproteins. The mucus layer plays a role in protecting the intestinal epithelial cells against damage, but is also considered to be critical for the adhesion of Lactobacillus in the GI tract. Consequently, the adhesion exhibited by lactobacilli on mucin has attracted attention as one of the critical factors contributing to the persistent beneficial effects of Lactobacillus in a constantly changing intestinal environment. Thus, understanding the interactions between Lactobacillus and mucin is crucial for elucidating the survival strategies of LAB in the GI tract. This review highlights the properties of the interactions between Lactobacillus and mucin, while concomitantly considering the structure of the GI tract from a histochemical perspective. View Full-Text
Keywords: adhesion; carbohydrate; colonization; gastrointestinal tract; histochemistry; lactic acid bacteria; mucin adhesion; carbohydrate; colonization; gastrointestinal tract; histochemistry; lactic acid bacteria; mucin
►▼ Show Figures 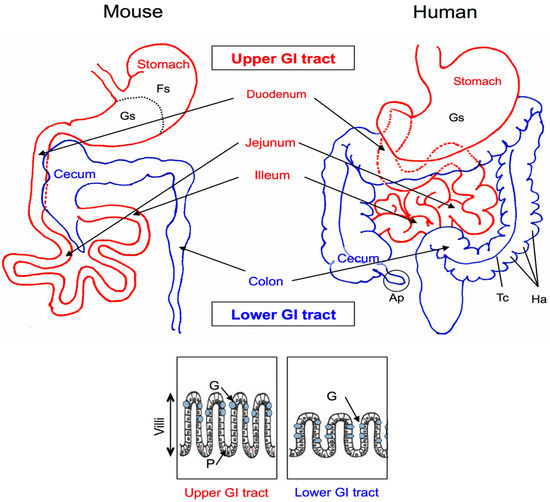