Molecular and Genomic Characterization of the Pseudomonas syringae Phylogroup 4: An Emerging Pathogen of Arabidopsis thaliana and Nicotiana benthamiana
Previous Article in Special Issue

Brucellosis is a global disease and the world’s most prevalent zoonosis. All cases in livestock and most cases in humans are caused by members of the genus Brucella that possess a surface O-polysaccharide (OPS) comprised of a rare monosaccharide 4-deoxy-4-formamido-D-mannopyranose assembled with α1,2 and α1,3 linkages. The OPS of the bacterium is the basis for serodiagnostic tests for brucellosis. Bacteria that also contain the same rare monosaccharide can induce antibodies that cross-react in serological tests. In previous work we established that synthetic oligosaccharides, representing elements of the Brucella A and M polysaccharide structures, were excellent antigens to explore the antibody response in the context of infection, immunisation and cross reaction. These studies suggested the existence of antibodies that are specific to the tip of the Brucella OPS. Sera from naturally and experimentally Brucella abortus-infected cattle as well as from cattle experimentally infected with the cross-reactive bacterium Yersinia enterocolitica O:9 and field sera that cross react in conventional serological assays were studied here with an expanded panel of synthetic antigens. The addition of chemical features to synthetic antigens that block antibody binding to the tip of the OPS dramatically reduced their polyclonal antibody binding capability providing conclusive evidence that the OPS tip (non-reducing end) is a potent epitope. Selected short oligosaccharides, including those that were exclusively α1,2 linked, also demonstrated superior specificity when evaluated with cross reactive sera compared to native smooth lipopolysaccharide (sLPS) antigen and capped native OPS. This surprising discovery suggests that the OPS tip epitope, even though common to both Brucella and Y. enterocolitica O:9, has more specific diagnostic properties than the linear portion of the native antigens. This finding opens the way to the development of improved serological tests for brucellosis. View Full-Text
Keywords: Brucella; O-polysaccharide; epitope Brucella; O-polysaccharide; epitope
►▼ Show Figures 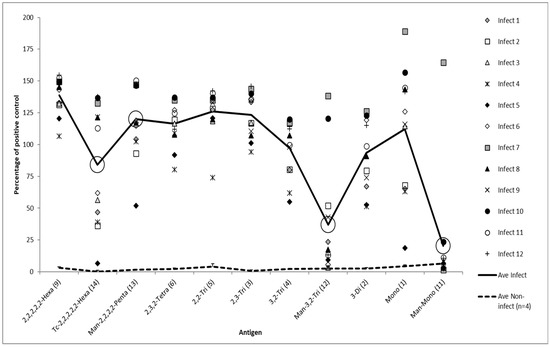