Environmental Risk of Leptospirosis in Animals: The Case of the Republic of Sakha (Yakutia), Russian Federation
Next Article in Special Issue

A Probiotic-Based Sanitation System for the Reduction of Healthcare Associated Infections and Antimicrobial Resistances: A Budget Impact Analysis

Healthcare associated infections (HAIs) and antibiotic resistance have high social and economic burdens. Healthcare environments play an important role in the transmission of HAIs. The Probiotic Cleaning Hygiene System (PCHS) has been shown to decrease hospital surface pathogens up to 90% vs. conventional chemical cleaning (CCC). This study compares PCHS to CCC as to reduction of HAIs and their severity, related antibiotic resistances, and costs. Incidence rates of HAIs/antibiotic resistances were estimated from a previously conducted multicenter pre-post (6 months CCC + 6 months PCHS) intervention study, after applying the propensity score matching technique. A budget impact analysis compared the current scenario of use of CCC with future scenarios considering increasing utilization of PCHS, from 5% to 50% in the next five years, from a hospital perspective in Italy. The cumulative incidence of HAI was 4.6% and 2.4% (p < 0.0001) for CCC (N = 4160) and PCHS (N = 4160) (OR = 0.47, CI 95% 0.37–0.60), with severe HAIs of 1.57% vs. 1% and antibiotic resistances of 1.13% vs. 0.53%, respectively. Increased use of PCHS over CCC in Italian internal medicine/geriatrics and neurology departments in the next 5 years is expected to avert at least about 31,000 HAIs and 8500 antibiotic resistances, and save at least 14 million euros, of which 11.6 for the treatment of resistant HAIs. Innovative, environmentally sustainable sanitation systems, like PCHS, might substantially reduce antibiotic resistance and increase protection of health worldwide. View Full-Text
Keywords: hospital associated infections; antimicrobial resistance; antibiotic consumption; probiotic-based sanitation system; sanitation; budget impact analysis; costs hospital associated infections; antimicrobial resistance; antibiotic consumption; probiotic-based sanitation system; sanitation; budget impact analysis; costs
►▼ Show Figures 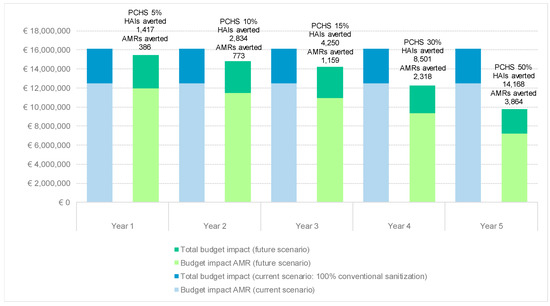