Congenital Toxoplasmosis: A Plea for a Neglected Disease
Previous Article in Special Issue

Bioenergetics of Mycobacterium: An Emerging Landscape for Drug Discovery

Sputum smear-negative HIV-associated active tuberculosis (TB) is challenging to diagnose. CD14 is a pattern recognition receptor that is known to mediate monocyte activation. Prior studies have shown increased levels of soluble CD14 (sCD14) as a potential biomarker for TB, but little is known about its value in detecting smear-negative HIV-associated TB. We optimized a sandwich ELISA for the detection of sCD14, and tested sera from 56 smear-negative South African (39 culture-positive and 17 culture-negative) HIV-infected pulmonary TB patients and 24 South African and 43 US (21 positive and 22 negative for tuberculin skin test, respectively) HIV-infected controls. SCD14 concentrations were significantly elevated in smear-negative HIV-associated TB compared with the HIV-infected controls (p < 0.0001), who had similar concentrations, irrespective of the country of origin or the presence or absence of latent M. tuberculosis infection (p = 0.19). The culture-confirmed TB group had a median sCD14 level of 2199 ng/mL (interquartile range 1927–2719 ng/mL), versus 1148 ng/mL (interquartile range 1053–1412 ng/mL) for the South African controls. At a specificity of 96%, sCD14 had a sensitivity of 95% for culture-confirmed smear-negative TB. These data indicate that sCD14 could be a highly accurate biomarker for the detection of HIV-associated TB. View Full-Text
Keywords: tuberculosis; biomarker; diagnostics; HIV; CD14; C-reactive protein tuberculosis; biomarker; diagnostics; HIV; CD14; C-reactive protein
►▼ Show Figures 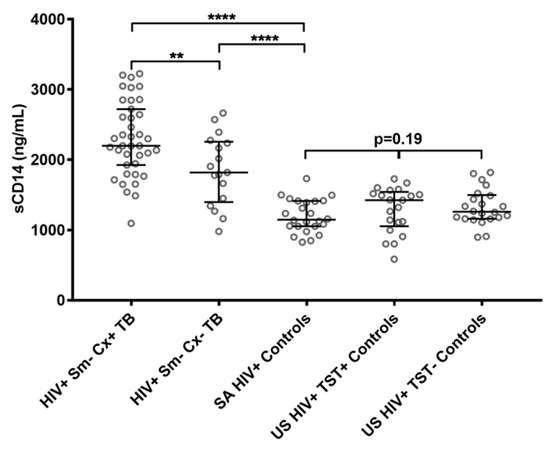