Candida albicans is a commensal fungus that colonizes the human oral cavity, skin and other mucosal tissues. In settings of immune compromise, such as HIV/AIDS, chemotherapy, organ transplantation or congenital immunodeficiency, C. albicans causes opportunistic infections, including oropharyngeal candidiasis (OPC, thrush) and chronic mucocutaneous candidiasis (CMC), which encompasses OPC, as well as infections of skin, nails and vaginal tract [1]. Recently, it has become clear that IL-17 (also known as IL-17A), the signature cytokine of the Th17 lineage, is critically important for immunity against C. albicans [2,3].
IL-17 is a pro-inflammatory cytokine that is a major driver of neutrophil responses in vivo. IL-17 acts predominantly on non-hematopoietic cells, such as epithelial cells, keratinocytes and mesenchymal cells, which express the heterodimeric IL-17 receptor composed of IL-17RA and IL-17RC [4]. Stimulation of these cells by IL-17 induces the expression of factors that amplify and recruit neutrophils to sites of infection, including G-CSF, CXC chemokines (IL-8, CXCL1, CXCL2, CXCL5) and S100A8/9 (calprotectin). Neutrophils are vital for immunity to OPC, as their depletion leads to dramatically-increased susceptibility to disease, and IL-17 deficiency is associated with reduced neutrophil mobilization [4,5]. Therefore, the IL-17-neutrophil axis is a central feature of immunity to mucosal Candida infections.
Immunity to OPC is traditionally associated with CD4+ T cells, particularly since over 90% of HIV/AIDS patients experience episodes of thrush during the course of disease [6,7]. Similarly, mice with an HIV transgene are susceptible to OPC, which is dependent on Th17-dervied cytokines [8]. T cells with reactivity to C. albicans in humans and mice are mainly of the Th17 phenotype [9,10,11,12]. Humans and mice lacking IL-17R signaling are subject to CMC, and mutations that impact Th17 cell generation or maintenance also predispose to Candida infections [4,13,14,15,16]. Unlike humans, mice are immunologically naive to C. albicans, as they do not harbor this organism as a commensal microbe [17]. Therefore, mice do not generate adaptive Th17 responses until at least 7–14 days post exposure to Candida [11]. Nonetheless, mice mount a rapid and effective IL-17-dependent innate response to oral Candida infection [4]. Therefore, both adaptive and innate immunity to OPC is mediated by the IL-17R pathway.
In addition to conventional Th17 cells, numerous innate cell types express IL-17 [18]. Such cells can be mobilized rapidly in response to infection and do not require prior antigen exposure to be activated. In the context of both oral and dermal candidiasis, γδ-T cells have been shown to produce IL-17 [19,20,21]. In addition, we recently showed that a CD4+ innate lymphocyte population, known as “natural” Th17 (nTh17) cells, is also a major source of IL-17 in OPC [19]. Several recent reports have suggested that neutrophils may be an important source of IL-17 in the context of infections caused by fungal species, such as Aspergillus and Fusarium [22,23,24,25]. Since both IL-17 and neutrophils are essential for immunity to mucosal candidiasis, we asked whether this might also be the case in oral candidiasis. Using a sensitive IL-17 reporter mouse system, we find that neutrophils are not an apparent source of IL-17, nor are neutrophils required for induction of an IL-17 gene signature in the context of OPC.

2.1. Neutrophils Do Not Produce IL-17 in Response to Oral C. albicans Infection

To determine whether neutrophils could be a source of IL-17 during OPC, we took advantage of an elegant fate-tracking reporter mouse that permits sensitive detection of IL-17A in oral immune cells [20]. In this system, the CRE recombinase is expressed under the control of the endogenous Il17a promoter and crossed to a Rosa26eYFPflox/stop mouse line (Il17aCreRosa26ReYFP, referred to as IL-17eYFP). Consequently, cells that express the Il17a gene become permanently marked by YFP and, therefore, report both prior and current IL-17 expression. Importantly, mice heterozygous for CRE are not deficient for IL-17 due to retention of IL-17A on one allele, and, therefore, show normal resistance to OPC [26]. This system was used originally to demonstrate that IL-17A is produced by γδ-T cells in acute dermal candidiasis [20]. We recently used these mice to demonstrate that IL-17A is produced by γδ-T and nTh17 cells during the early (two day) response to oral candidiasis [19].
To determine whether neutrophils might also produce IL-17 during OPC, we employed a standard model system in which C57BL/6 (wild-type, WT) or IL-17eYFP mice were infected orally by a 75-min sublingual exposure of Candida albicans [27]. Tongue tissue was collected two days post-infection and processed for flow cytometry. In sham-infected IL-17eYFP mice, there was a small baseline population of CD45+YFP+ cells, indicating present or prior IL-17 expression (Figure 1A). These YFP+ cells were all TCR+, and the majority (85%) were TCR γδ+. After oral C. albicans infection, the CD45+YFP+ population reproducibly increased, and the percentage of TCRβ+ cells increased relative to the TCR γδ+ population (Figure 1B). The absolute number of YFP+ cells approximately doubled (data not shown). As expected, there was no detectable YFP signal in control WT mice (data not shown; [19]). These results are highly concordant with our recent observations and confirm that both TCRβ-expressing and TCR γδ-expressing cells contribute to the IL-17-dependent response to OPC [19].
To determine whether any IL-17 is expressed in neutrophils during acute OPC (two days post-infection), parallel samples of tongue homogenates were stained with Abs against Ly6G. In WT control mice, there was no baseline YFP+ population, as expected (Figure 1C). A population of Ly-6G+ cells representing neutrophils was present at low levels at baseline (2%–5%) in Sham-treated WT and IL17eYFP mice. This Ly6G+ population expanded dramatically (to 15.6%) in Candida-inoculated IL-17eYFP mice (Figure 1C). However, no cells in this population were positive for YFP, indicating that there was no apparent current or prior production of IL-17A by this cell population. The YFP+ population expanded (from 0.4%–0.7%), consistent with Figure 1A,B. Thus, there is no apparent production of IL-17A by neutrophils during the acute response to oral candidiasis. 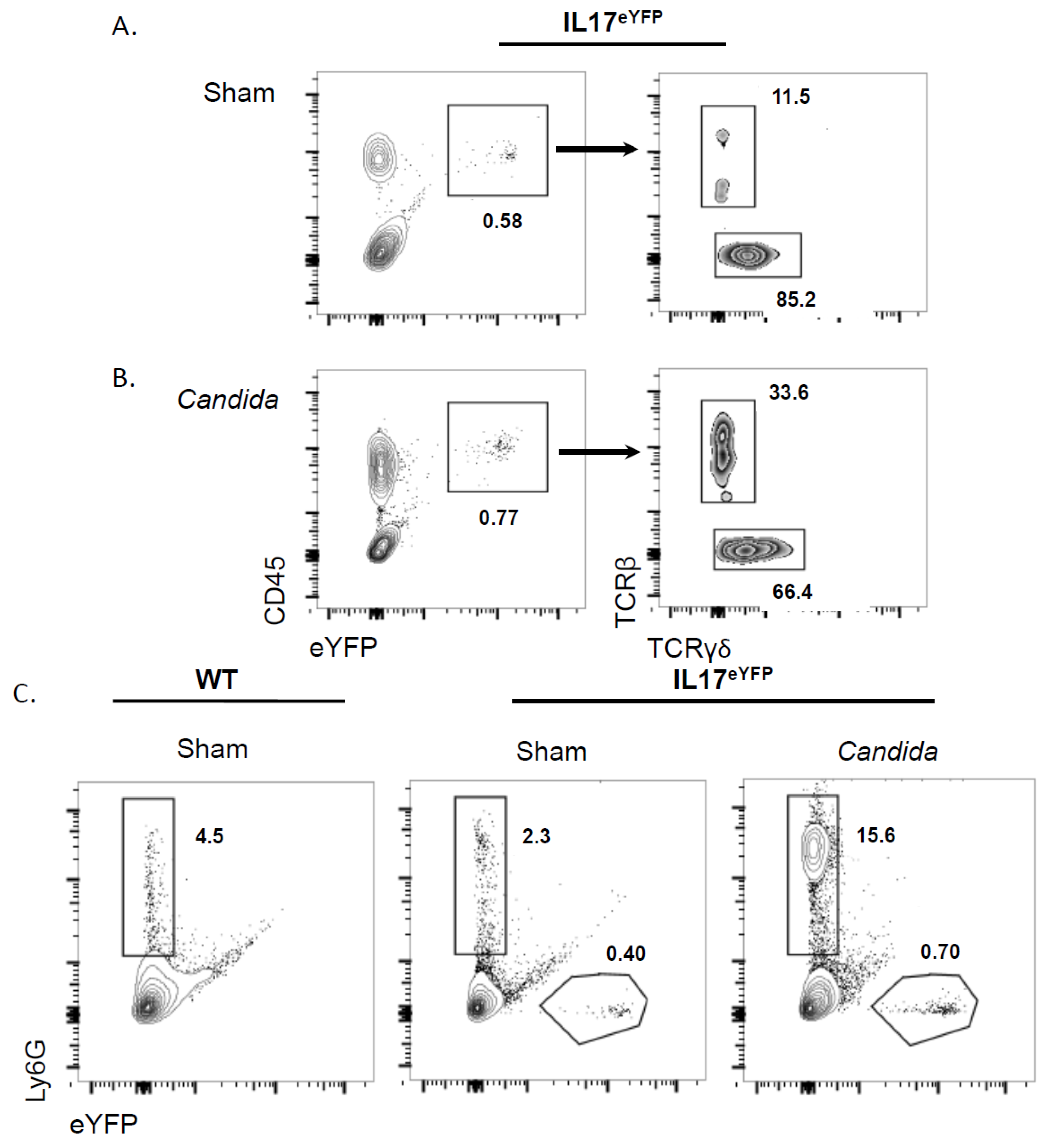 2.2. Neutrophil Depletion Is Not Required for IL-17 Production or Signaling in OPC

As an independent approach to determine whether neutrophils contribute to IL-17 production, we depleted neutrophils in mice with anti-Gr-1 monoclonal Abs injected 24 h prior to infection, a regimen that we previously showed causes effective neutrophil depletion in tongue and renders mice susceptible to OPC [5,28]. We then assessed levels of IL-17A mRNA and expression of known IL-17 target genes following C. albicans infection. Control mice were treated with an isotype-matched Ab or sterile PBS. One day after administration, mice were inoculated orally with C. albicans, and gene expression in tongue was assessed by qPCR 24 h later. WT mice infected with C. albicans showed increased expression of Il17a mRNA, as expected (Figure 2A). Il17a expression was also enhanced in mice depleted of neutrophils; in fact, Il17a expression was markedly increased in infected mice depleted of neutrophils compared to controls (Figure 2A). This increase in Il17a may result from the failure of these mice to clear C. albicans, which is associated with enhanced inflammation, even at early time points when fungal loads are similar, and is consistent with previous studies [29]. This finding supports the conclusion that neutrophils do not express IL-17A during the early response to OPC. 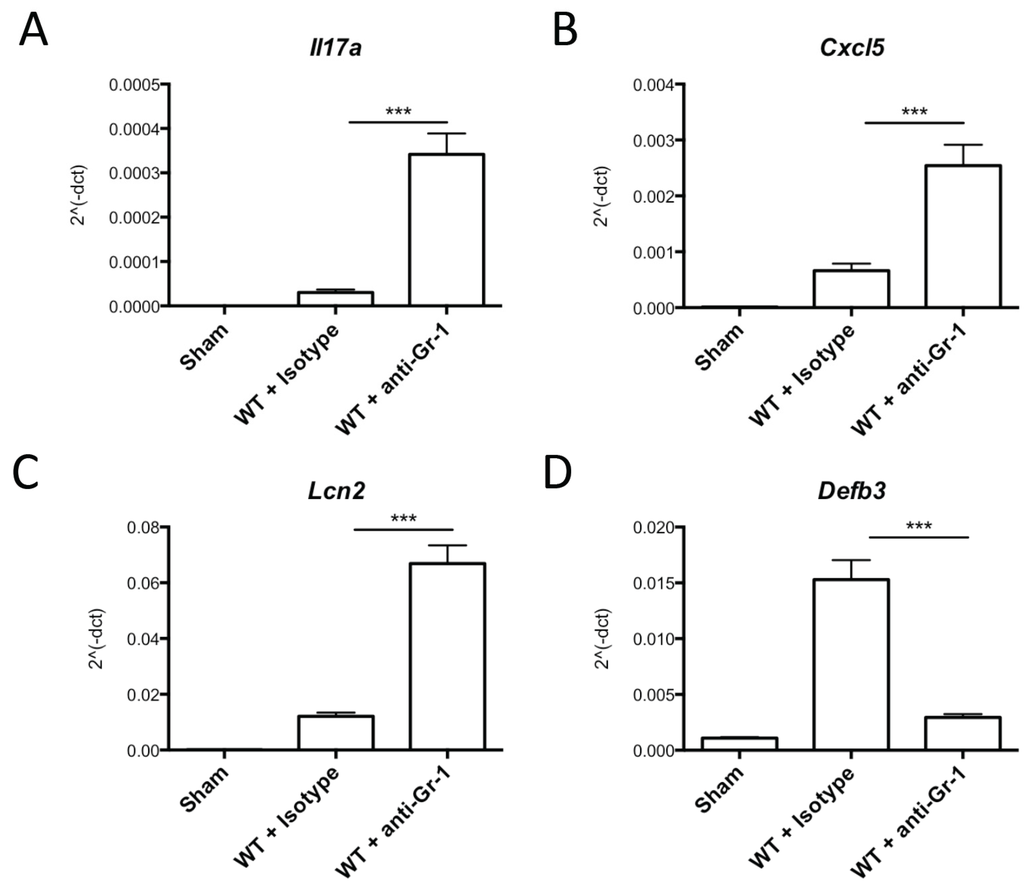 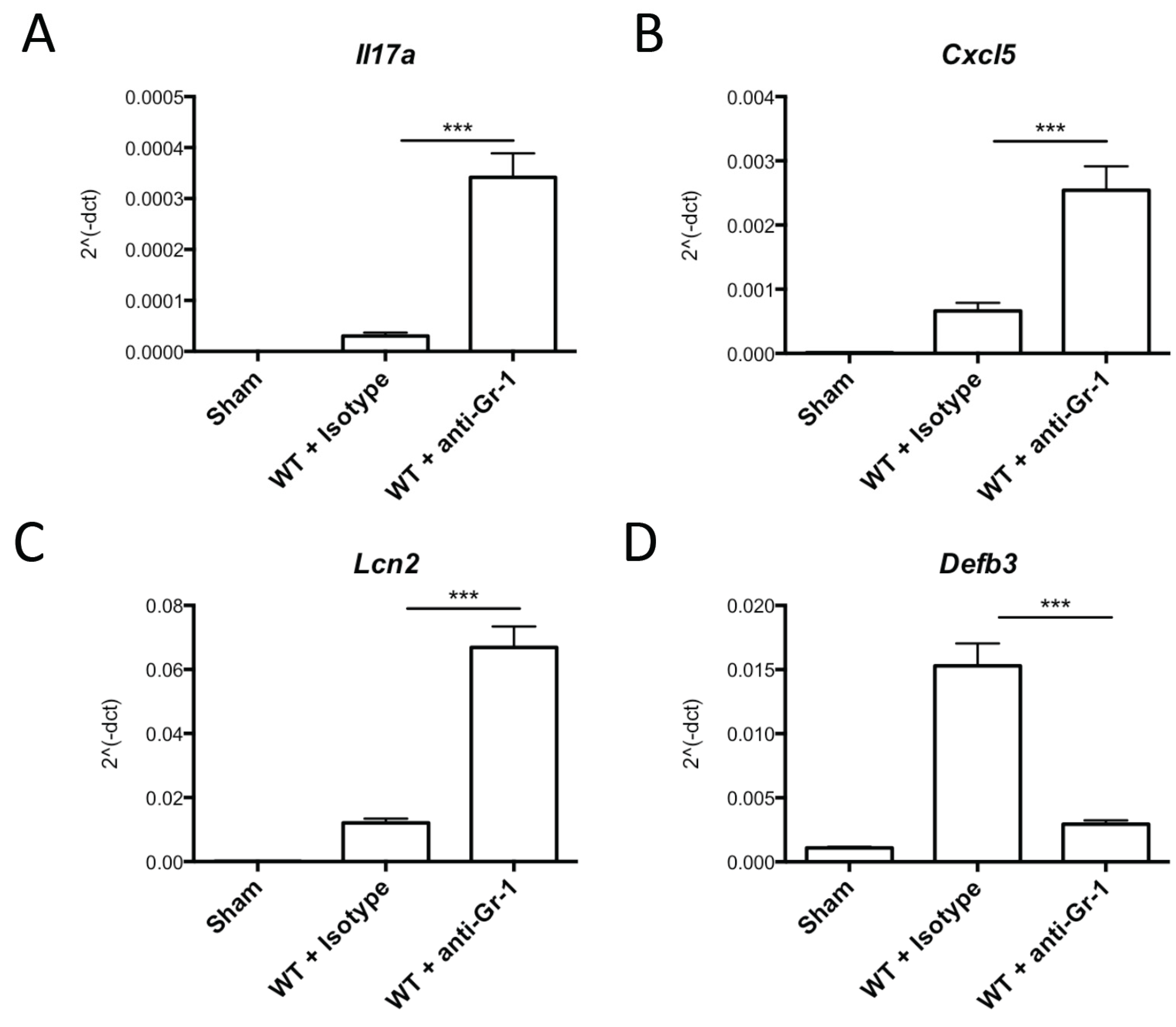 IL-17 triggers the expression of a characteristic gene signature, including transcripts encoding chemokines and various antimicrobial genes [11,30]. Cxcl5 and Lcn2 are prototypical IL-17-induced genes that are expressed by oral epithelial cells following C. albicans infection. Consistent with the induction of IL-17A following infection, both of these genes were induced in isotype-treated mice after infection. In addition, a similar augmentation of gene expression was observed in neutrophil-depleted mice compared to isotype-treated mice (Figure 2B,C). The Defb3 gene (encoding β-defensin 3) is another IL-17 target gene that is induced in epithelial cells upon IL-17 treatment [31,32,33] and is expressed constitutively in neutrophils; hence, its expression is markedly upregulated in the oral cavity following Candida infection. Indeed, Defb3 was induced in infected WT mice treated with isotype Abs, as we have previously demonstrated [4]. Interestingly, Defb3 was decreased in the neutrophil-depleted cohort compared to the isotype-treated control group (Figure 2D), which suggests that a significant portion of BD3 in OPC may come from the infiltrating neutrophils. Thus, IL-17A and epithelial-derived IL-17-dependent genes expressed by the oral epithelium, such as Cxcl5 and Lcn2, are not dependent on neutrophils for expression. Rather, these findings support a model in which IL-17 is produced exclusively by TCR-bearing cell types, which induce the expression of neutrophil-recruiting genes and antimicrobial peptides, ultimately leading to C. albicans clearance (Figure 3). 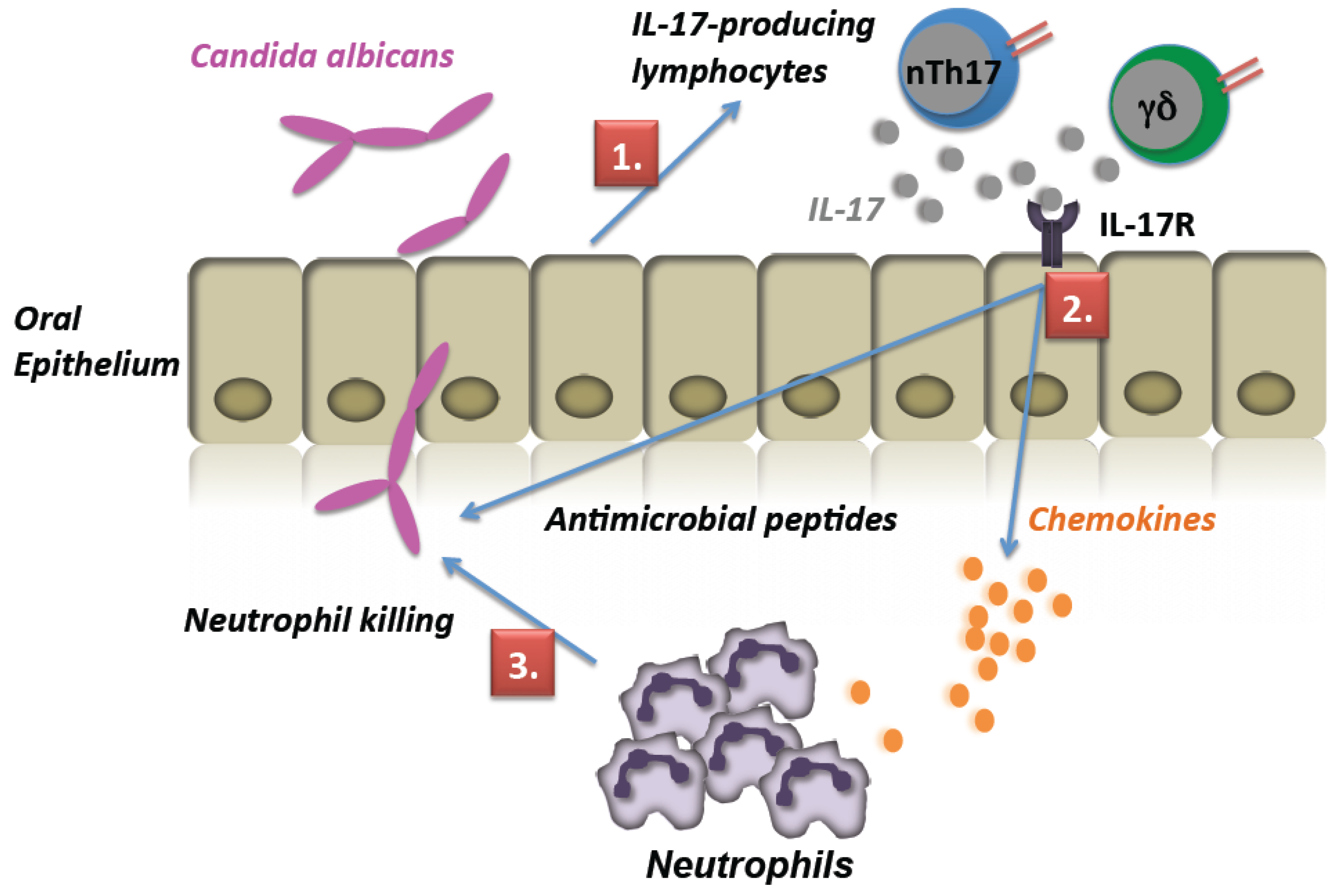 IL17CRE mice, created by Brigitta Stockinger [20], were crossed to Rosa26eYFP (The Jackson Laboratory, Bar Harbor, ME). All mice were on the C57BL/6 background, and all experiments included age- and sex-matched controls. OPC was performed by sublingual inoculation with a pre-weighed cotton ball saturated in 2 × 107 cells/mL C. albicans (strain CAF2-1) or PBS (Sham) for 75 min under anesthesia, as described [4,53]. Oral swabs were obtained prior to each experiment to verify the absence of commensal C. albicans colonization. Mice were weighed daily and euthanized for humane reasons if they had more than a 25% weight loss or exhibited other signs of pain or distress (however, in these experiments, no animals fell into this category). There were no severe adverse events in any group. The animal protocols used in this work were evaluated and approved by the University of Pittsburgh Institutional Animal Care and Use Committee (Protocol 14125154, Animal Welfare Assurance Number A3187-01) and adhered to the guidelines in the Guide for the Care and Use of Laboratory Animals of the NIH.

Several studies have suggested that neutrophils may serve as sources of IL-17 during fungal infections, and IL-17 is vital for immunity to oropharyngeal candidiasis. We used a sensitive IL-17A-GFP reporter mouse system to show that this cytokine is not expressed by neutrophils in the immediate response to oral infection by Candida albicans.

Sarah L. Gaffen was supported by NIH Grants DE022550, DE023815 and AI107825. Heather R. Conti was supported by F32-DE023293. The content is solely the responsibility of the authors and does not necessarily represent the official views of the National Institutes of Health. Anna R. Huppler was supported by the Children’s Hospital of Pittsburgh of University of Pittsburgh Medical Center and a Pediatric Infectious Disease Society Award (funded by the Stanley Plotkin Sanofi Pasteur Fellowship Award). We thank Dominique Baeten, Mandy McGeachy, George Hajishengallis and Partha Biswas for helpful discussions and critical reading.

Sarah L. Gaffen has received research grants from Novartis and Janssen, as well as consulting fees, travel reimbursements or honoraria from Novartis, Eli Lilly, Pfizer, Janssen and Amgen. There are no other conflicts of interest.