A Mind Trying to Right/Write Itself: Metaphors in Madness Narratives
Next Article in Special Issue

The Glorious Plagiarism, Trash Aesthetics, and Ecological Entropy of Cryptic Cut-Ups from Minutes to Go
Previous Article in Special Issue

The American Film Musical and the Place(less)ness of Entertainment: Cabaret’s “International Sensation” and American Identity in Crisis

Motivated by “the need to embody … the palpable tension between the North and the South as it is reflected, articulated, and interpreted in contemporary cultural production”, documenta 14’s selection of Athens as a “vantage point … where Europe, Africa, the Middle East, and Asia face each other” is in line with the ancient Greek concept of the ‘cosmopolite’, a term that Diogenes first coined “as a means of overcoming the usual dualism Hellene/Barbarian”. In this article, I suggest that Naeem Mohaiemen’s feature film, Tripoli Cancelled (2017), commissioned by documenta 14 and premiered at the National Contemporary Art Museum in Athens, proposes a rich and compelling model of cosmopolitan world-making. Shot at the abandoned Elliniko Airport, the film is poetically suspended between fact and fiction, past and present, the historical and the incidental, the local and the global. Creatively positioning the concepts of cosmopolitanism, nostalgia, and hospitality in dialogue, I develop a theoretical model through which I seek to explore how the literally and metaphorically liminal space inhabited by the film’s anonymous protagonist resonates with the contemporary conditions of desperate migration. View Full-Text
Keywords: Naeem Mohaiemen; Tripoli Cancelled; Documenta 14; Athens; Greece; contemporary art; cosmopolitanism; nostalgia; hospitality; desperate migration Naeem Mohaiemen; Tripoli Cancelled; Documenta 14; Athens; Greece; contemporary art; cosmopolitanism; nostalgia; hospitality; desperate migration
►▼ Show Figures 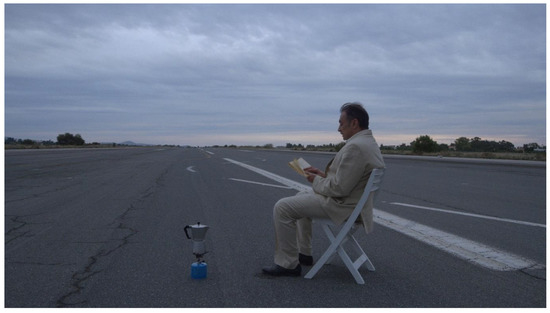