Folklore and the Hebrew Bible: Interdisciplinary Engagement and New Directions
Next Article in Special Issue

Humanities for the Environment 2018 Report—Ways to Here, Ways Forward

The rise and abandonment of Uranium City constitutes an environmental history yet to be fully evaluated by humanities scholars. 1982 marks the withdrawal of the Eldorado Corporation from the town and the shuttering of its uranium mines. The population declined to approximately 50 from its pre-1982 population of about 4000. This article is inspired by findings from the authors’ initial field visit. As Uranium City is accessible only by air or by winter roads across Lake Athabasca, the goal of the visit in May 2017 was to gather information and questions through photographic assessment and through communication and interviews with residents. This paper in part argues that the cyclonic development metaphor used to describe single-commodity communities naturalizes environmental damage and obscures a more complicated history involving human agency. Apart from the former mines that garner remedial funding and action, the town site of Uranium City is also of environmental concern. Its derelict suburbs and landfill, we also argue, could benefit from assessment, funding, and remediation. Canada’s 2015 Truth and Reconciliation Commission Report provides a way forward in healing this region, in part by listening to the voices of those most affected by environmental impacts caused not by a metaphorical cyclone but by other humans’ decisions. As descendants of European immigrants to Turtle Island (the Indigenous term referring to North America), the authors are also subjects of the very terms—cyclonic development, abandonment, remediation—used to describe the history of the land itself: in this case, a mining town in the far northern boreal forests and Precambrian Shield. View Full-Text
Keywords: uranium; environment; humanities; remediation; truth and reconciliation; cyclonic development; Indigenous; landfill uranium; environment; humanities; remediation; truth and reconciliation; cyclonic development; Indigenous; landfill
►▼ Show Figures 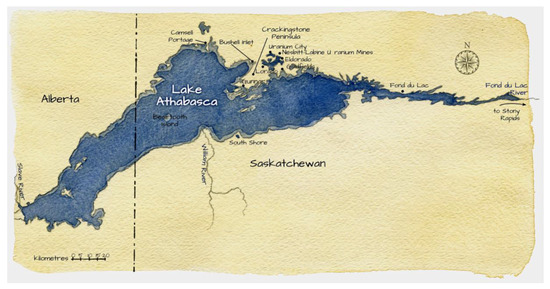