Migration and Conflict in a Global Warming Era: A Political Understanding of Climate Change

Neoliberal Reforms in Higher Education and the Import of Institutions

The implementation of neoliberal reforms in higher education coincides with the radical institutional changes in the transition from a planned to a market economy. The modernization of higher education is also connected with the concept of the “entrepreneurial” university that represents a third-generation university with an emphasis on optimization and marketing. However, economic policy aimed at reforming and developing the public sector is based on the import of institutions related to the production of public and mixed goods. In this paper, we show that neoliberal reforms threaten the welfare state in transition economies such as the Russian Federation. In addition to marketing, monetization, and commercialization, all areas of the public sector underwent an optimization policy, which primarily implied a relative reduction in the cost of producing public goods. The rhetoric of the marketing of education represents the modern state’s masked refusal to fulfill a part of its social obligations. Moreover, we argue that market channels intended for financing education are highly dependent on the income level of the population, the availability of institutions and the infrastructure for raising funds, and, most importantly, the development of the educational services market. Within this context, another significant factor is represented by the positive externalities from the prevalence and quality of education. Thence, our results show that insufficient private demand for education, including higher education, can negatively affect the prospects for the country’s socio-economic development in the medium and long run. View Full-Text
Keywords: economic transition; higher education; neoliberal reform; institutional economics; institutional import economic transition; higher education; neoliberal reform; institutional economics; institutional import
►▼ Show Figures 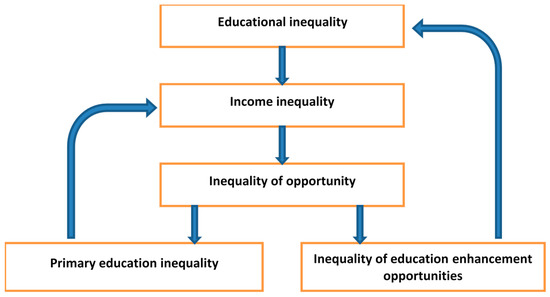