Analyzing Migration Management: On the Recruitment of Nurses to Germany
Previous Article in Journal

Management Students Values Depending on Religion—Comparative Research from Poland

Research on religion and its influence on work values is not frequent in Europe, where researchers do not usually consider this relation because of historical reasons. Nonetheless, the number of publications concerning religion’s contribution to organization management is systematically increasing. This study sheds light on the way Christian religions (Orthodox and Catholic) can shape value preferences of their believers as well as those who do not practice any religion but their families do. The study used a self-constructed value scale, which is a modification of M. Rokeach’s questionnaire survey. It differs from Rokeach’s Value Scale in respect to the quantity and quality of the proposed values and the assumption regarding the value hierarchy. A statistical analysis was carried out, enabling the indication of differences between the preference rates of 20 terminal and 20 instrumental values, depending on the denomination of the respondent and their family. Results of the study suggest that both religions influence the values preferences of their believers as well as non-believers coming from Catholic or Orthodox families. This impact was confirmed in the study both in relation to believers (through family) and non-believers (through family or social environment). Religion, therefore, proves to be an influential source of values preferences, which can be impactful also in the corporate surrounding. View Full-Text
Keywords: religion; values preferences; Rokeach’s value scale; management students religion; values preferences; Rokeach’s value scale; management students
►▼ Show Figures 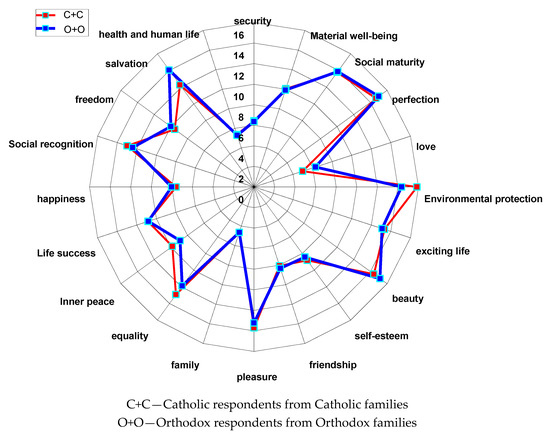