Since 2015, a large number of migrants (refugees and asylum seekers) from the Middle East, Asia, and Africa have arrived in Greece and continued their onward journey to western European countries where they settled. As various European Union (EU) countries have later blocked the flow of migrants from Greece to their final destination, thousands of them have been trapped in Greece, confined in overcrowded, temporary camps (known as “hot spots”) and awaiting the processing of their asylum application. The current article examines the response of the Greek educational institutes (primary, secondary and tertiary levels) to the recent migrant influx, with ultimate goals to integrate, educate, and assist them. The number of refugees and asylum seekers living in Greece is estimated to be 58,000 (2018 data) with 22,500 children among them. Their schooling inclusion follows the plan 111, “Refugee Education Host Structures (REHSs)”, as initiated by the Greek Ministry of Education in 2017. Students’ leakage range is still high (10–40% at elementary school and 45–56% at high School). The disruption in their life results in the lack of regular attendance. Greek universities responded to the challenge of the refugee influx, especially the University of the Aegean (UAeg), which is located on the eastern Mediterranean migration route. The UAeg’s response plan focuses on four areas: (a) to provide education to refugees; (b) to conduct research on the refugee phenomenon and migration processes; (c) to increase local citizens’ awareness and improve social inclusion toward the migrants; and (d) to develop technologies to improve daily life in the refugee camps. These actions are significant toward the social inclusion and cohesion of refugees and the further improvement of their daily life. View Full-Text
Keywords: refugees; asylum seekers; schools; universities; Lesvos refugees; asylum seekers; schools; universities; Lesvos
►▼ Show Figures 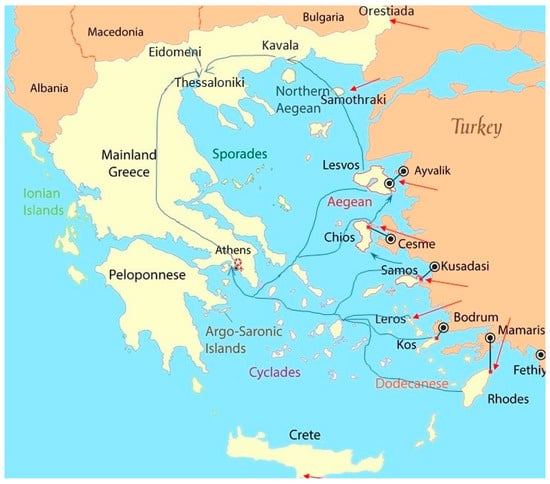