Prisons as Panacea or Pariah? The Countervailing Consequences of the Prison Boom on the Political Economy of Rural Towns

The importance of transnational migration projects for international development has been increasingly recognized over the past decades. Migrants who move from the Global South or East to work in low-wage sectors such as construction, agriculture or domestic services in wealthier countries may contribute both to growth in the receiving countries and socio-economic development in their countries of origin. Parallel to scholarship on migration and development, research on the transnationalization of domestic work generally assumes that growing care needs and increasing demand for private household services in Western societies imply a continuing demand for migrant labour. However, since the global financial crisis broke out in 2008, unemployment among migrant workers has increased dramatically in many immigrant-receiving countries, Spain being among the most severely affected. Job destruction has so far been lower in the domestic sector than in other sectors occupying large numbers of migrant workers. Yet, we find that migrant domestic workers in Spain are affected by the recession both in terms of unemployment or underemployment and deteriorating job conditions, with transnational consequences such as loss of remittances. Many migrants find themselves in a situation of “standby,” trying to subsist while waiting for the recession to end. View Full-Text
Keywords: transnational migration; global financial crisis; domestic work; precariousness; remittances; development transnational migration; global financial crisis; domestic work; precariousness; remittances; development
►▼ Show Figures 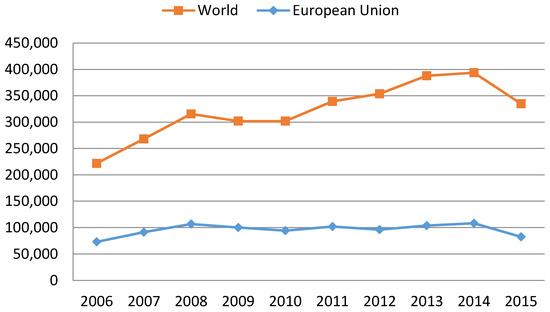