Books, Scrolls and Ripples: In Search of an Audience through the Printed Works of Helen Douglas
Previous Article in Journal

It’s All in the Reading

“Fragile Possibilities”: The Role of the Artist’s Book in Public Art

Writing during the millennium, not long after the installation of Antony Gormley’s The Angel of the North, artist and publisher Simon Cutts criticised the dominance of monumentalism within the field of public art. Decrying the lack of critical engagement offered by public sculpture, he called for an alternative approach, focussed upon process rather than product. Almost two decades later, it could be argued that mainstream understandings of public art have expanded to incorporate more ephemeral approaches, such as performance, sound art and social interventions. Within this context, the artist’s book has come to occupy a significant role within the production, dissemination and interpretation of such work. This has been accompanied by a growing interest in the artist’s book as a public artwork in its own right. These two distinct yet interrelated approaches form the subject of our essay. Drawing on examples of artists’ books held in the Special Collections at Manchester Metropolitan University and the library collections at Henry Moore Institute as well as from our own curatorial practice, we argue that, far from ancillary artefacts, artists’ books play a pivotal role within the production of public art and provide an important space in which to critically engage with the complexities of place.
Keywords: public art; artists’ books; place public art; artists’ books; place

Writing during the millennium, not long after the installation in Gateshead of Antony Gormley’s monumental sculpture, The Angel of the North, artist and publisher Simon Cutts criticised the dominance of monumentalism within the field of public art. Decrying the lack of critical engagement offered by public sculptures, which, as “pejoratively valuable objects”, litter the world “like Mount Everest is littered with Coke cans” (Cutts 2007, p. 87), he called for an alternative approach to public art, which prioritises the production of “metaphorical space” (ibid.) over physical form. Almost two decades later, it could be argued that mainstream understandings of public art have expanded beyond monumental sculpture to incorporate approaches that focus on process rather than product. Indeed, the commissioning of ephemeral artforms, such as performance, sound art, digital art and what is commonly referred to as socially engaged practice, has largely overtaken the installation of permanent sculpture, in part due to its prohibitive cost in today’s economic climate.
Within this milieu, the artist’s book has come to occupy a significant role within the production, dissemination and interpretation of public art. As the curators of In Certain Places—a long-term public art project based in the city of Preston1—we have, over the last few years, witnessed a growing trend amongst artists of producing publications as an integral part of their commission. For many, this is a temporal strategy, which, through the documentation of the artworks’ processes, realisation and reception, provides a legacy for an otherwise temporary project. For others, it offers a critical space in which to further explore the context and thematic content of their work, often through the invited contributions of specialists in other fields. As physical artefacts, books allow artists to connect with their audiences at the level of individuals, serving simultaneously as souvenirs for those who have experienced the work and as proxy artworks for those who have not. For certain artists, therefore, the artist’s book’s critical and communicative functions supplant the need for other creative outputs, and publications have also been produced as public artworks in their own right.
In the following text, we explore these trends through reference to specific artists’ books, which have been produced as, or as part of, public artworks. Within this context, public art serves as a broad definition to describe a range of place-based practices. This includes artworks that are created for, or in response to, specific locations, as well as those that explore more universal aspects of place. In each case, the “publicness” of the work relates to its existence, either exclusively or in part, outside of traditional gallery-based models of production and dissemination. In employing the term, we also acknowledge the lack of clarity that exists around public art as a discipline. As Cameron Cartiere and Shelly Willis point out, public art is an elusive and ambiguous practice, which “weaves in and around itself, existing in layers” (Cartiere and Willis 2008, p. 9). As a result, “since public art was coined as a term” over fifty years ago, “it has yet to be clearly defined in any art history text” (ibid., p. 8). However, despite, or, perhaps, due to such ambiguity, we regard it as a useful shorthand to describe the type of place-focussed, interdisciplinary and multi-sited projects that characterise our joint curatorial practice.
As a curatorial partnership, In Certain Places brings together our individual perspectives and professional concerns through a jointly authored project. In the same way, the following essay reflects our personal areas of interest in relation to artists’ books. In the first section, Charles Quick provides an art historical context, which locates the roots of the relationship between artists’ books and public art within the emergence of site-specific practice during the 1960s and 1970s. Central to this is the use of photography as a medium for documenting both the creative processes and the final outcomes of public art projects. He then goes on to examine the various roles that artists’ books play in connection to specific public artworks. Following this, Elaine Speight examines the status of the artist’s book as an autonomous public artwork. Focussing on the work of three artists from the North of England, she argues that, as interactive and sensory objects, artists’ books provide the ideal medium for creative explorations of place. Through these dual accounts, we aim to demonstrate that, far from ancillary artefacts, artists’ books play a pivotal role within the production of public art. Moreover, as accessible and democratic objects, they allow artists to express their ideas and connect with audiences outside of institutional boundaries. In this way, artists’ books offer an antidote to the popular view of public art as municipal decoration, by presenting it as an experimental, creative and, above all, critical practice.

2. The Artist’s Book in Public Art

In 2008 Glassball was commissioned to develop and deliver the Living Gallery project. Their job was to deliver high quality art works to be placed over the secured windows and doors of properties purchased for clearance, in order to create a ‘gallery’ of art works that would not only have visual impact on the area but would also be relevant and meaningful to the local community.
(Glassball Art projects 2010)

Many artists that work within the expanded field of public art have created artworks that have been funded by and are part of regeneration projects, sometimes described disingenuously as “art washing”. They bring their creative abilities and interests, in this case, a willingness to work with a place and a community, to create a work that eventually expands the boundary of the original regeneration brief.
After the event, in this case, not uncommonly following a research and development period life of two years, there becomes a need to capture the project’s numerous facets and acknowledge the many local participants and partners’ involvement in the activity. Thus, the artist’s book sets out to transcend the multiple agendas and audiences, in this case, PNC Regeneration, residents of all ages and service providers, for example, housing associations. However, this book has another purpose, that is to create a contemporary art context for the work, establishing its value as an artwork that sits entirely outside of an art gallery context, unconnected to the traditional art world. Through its distribution, the artist’s book places the work into that wider cannon of practice, especially as it becomes housed in appropriate collections and archives.
Consequently, it is the artist’s book that can transcend the life of all these works presented. The Russian artist/architect El Lissitzy often singled out the artist’s book as his preferred creative medium. In his essay The New Culture, published in Vitebsk in 1919, he talks about how he values the artist’s book: “In contrast to the old monumental art itself (the book) goes to the people and does not stand like a cathedral in one place waiting for someone to approach. Surely the book is now everything. It expects the contemporary artist to make of it this ‘monument of the future’” (Perloff 2016, p. 150). Later, in the 1960s, the Dutch artist Jan Dibbets gave up painting to concentrate on interventions in the landscape, which he then recorded using photography. In 1969, he created the work Robin Redbreast’s Territory/Sculpture (1969). The small book contained all the ingredients that you now find in artists’ books that document site-specific projects. There is a map of Amsterdam showing the location of Vondel Park, including hand-drawn sketches of the sculpture’s location. Drawings, photographs and hand-written notes in his native language are set out on the left-hand pages and then typewritten in English, French and German on the opposite page. The project sets out to manipulate the territory of a robin in the park by installing poles with perches, which were slowly moved each day. The work was the drawing in space that the robin created by flying between the poles. This is something that can only be fashioned in the viewer’s imagination while reading the small hand-sized artist’s book, far outliving the original sited work. In a recorded interview at the Museum of Modern Art in New York, Jan Dibbets states, “The book at the end is the real sculpture”.2

3. The Artist’s Book as Public Art 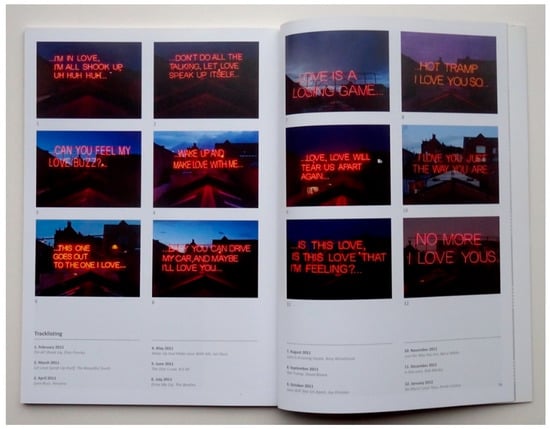 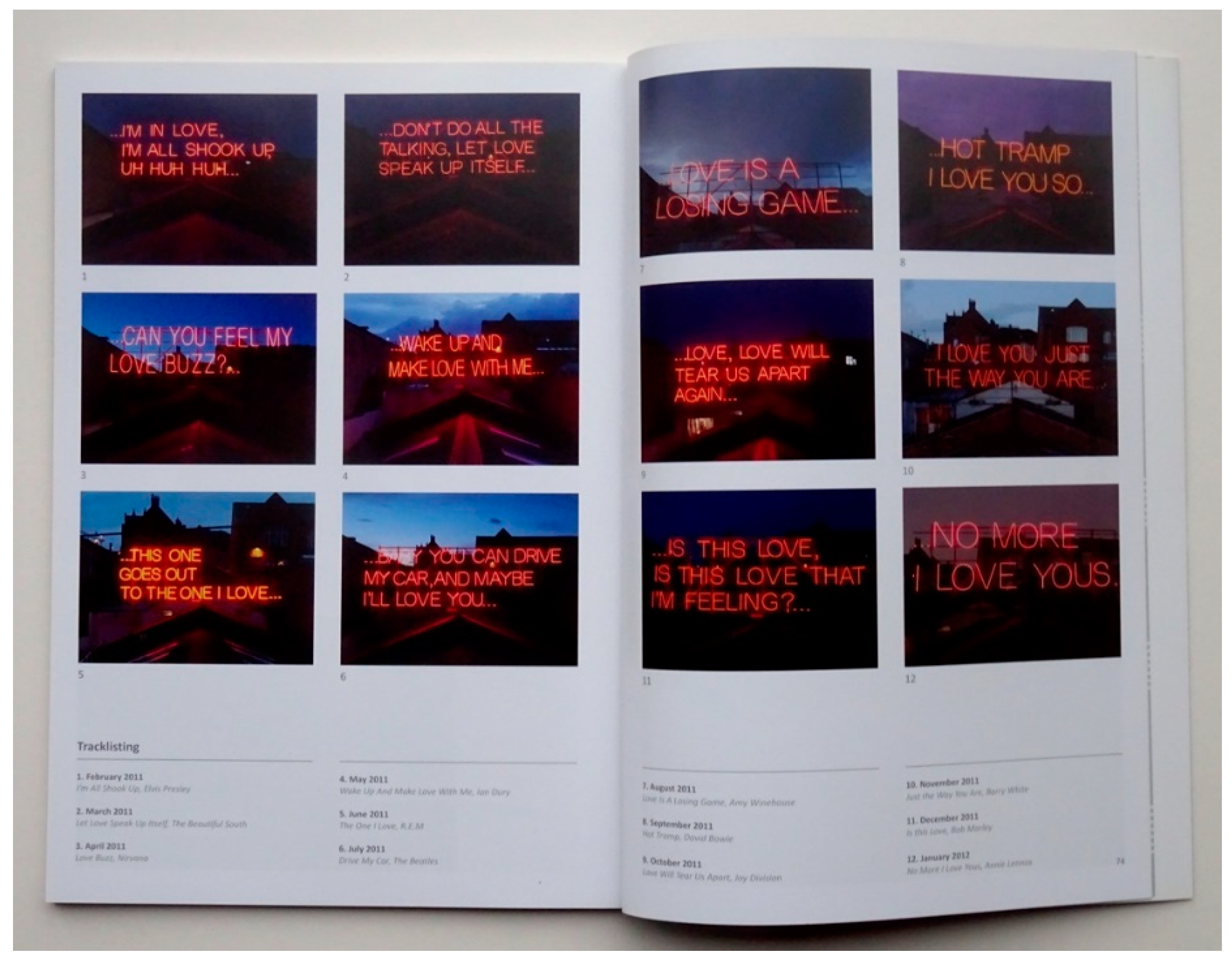 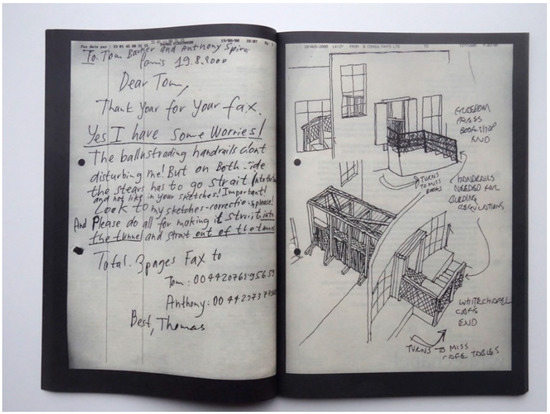 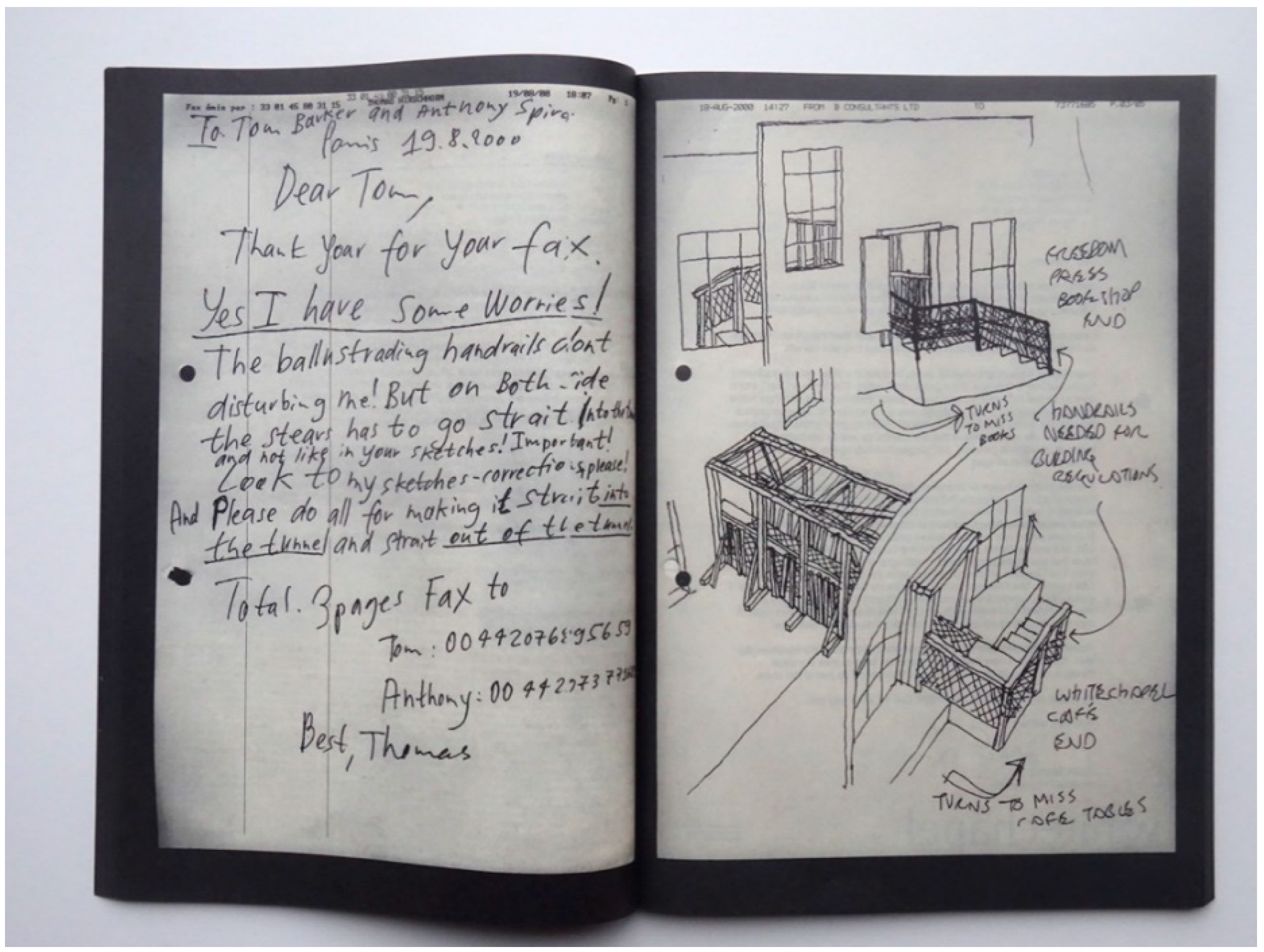 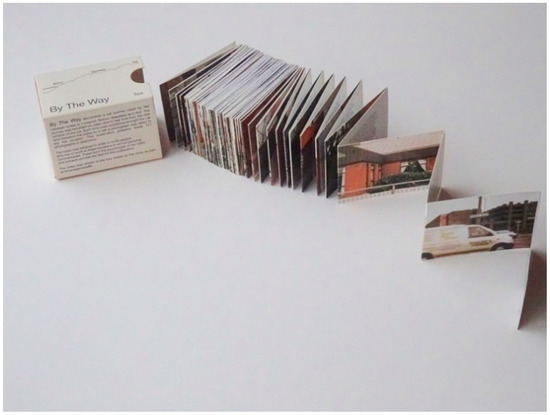 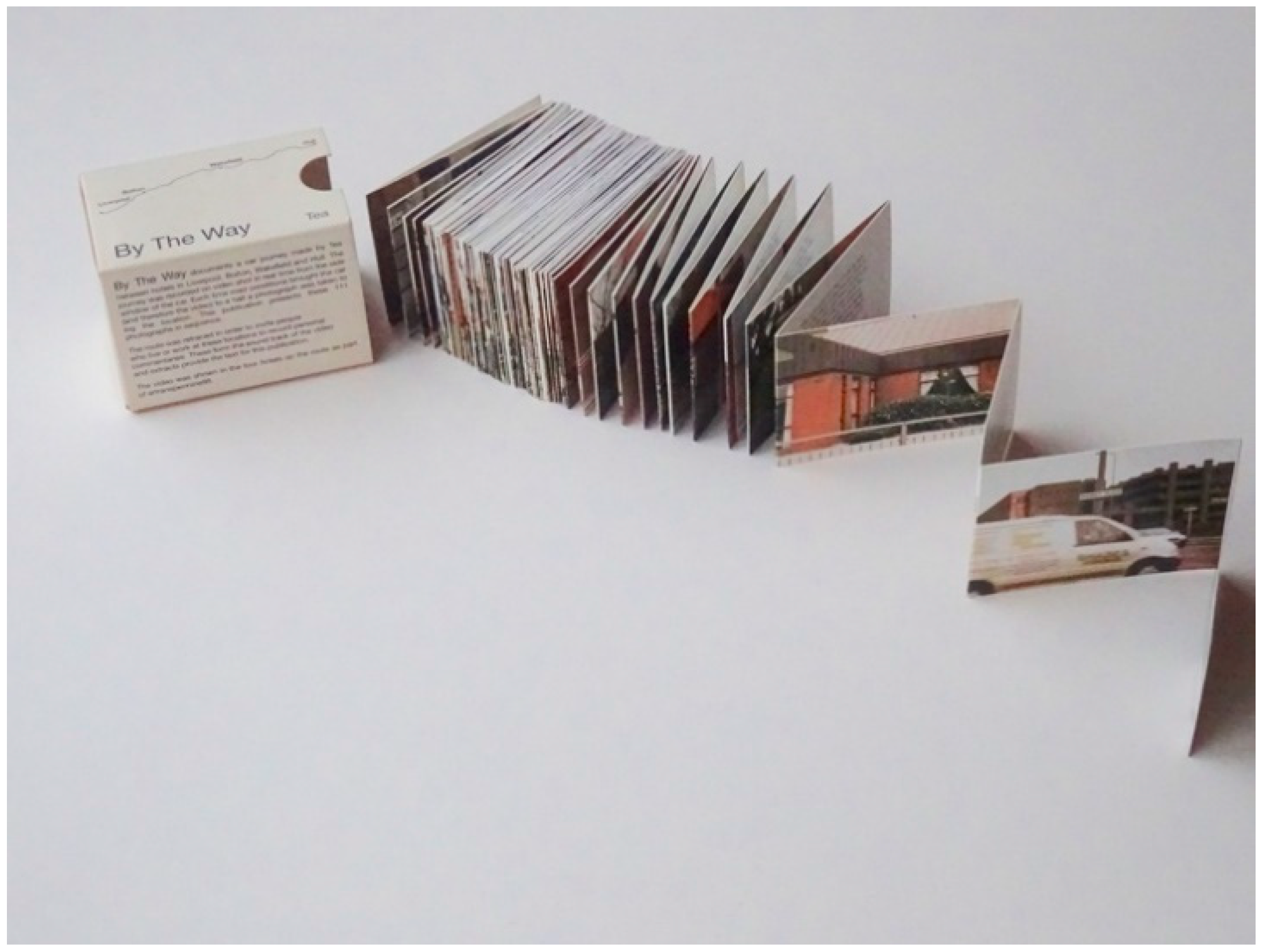 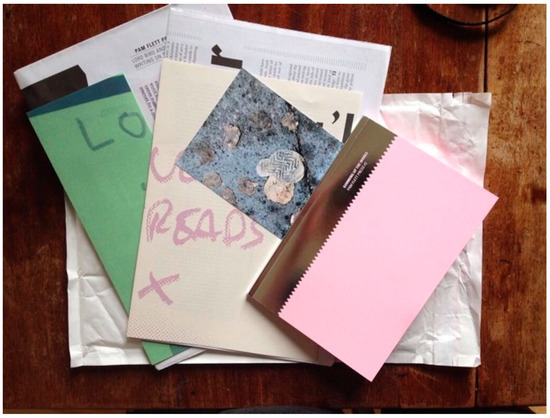 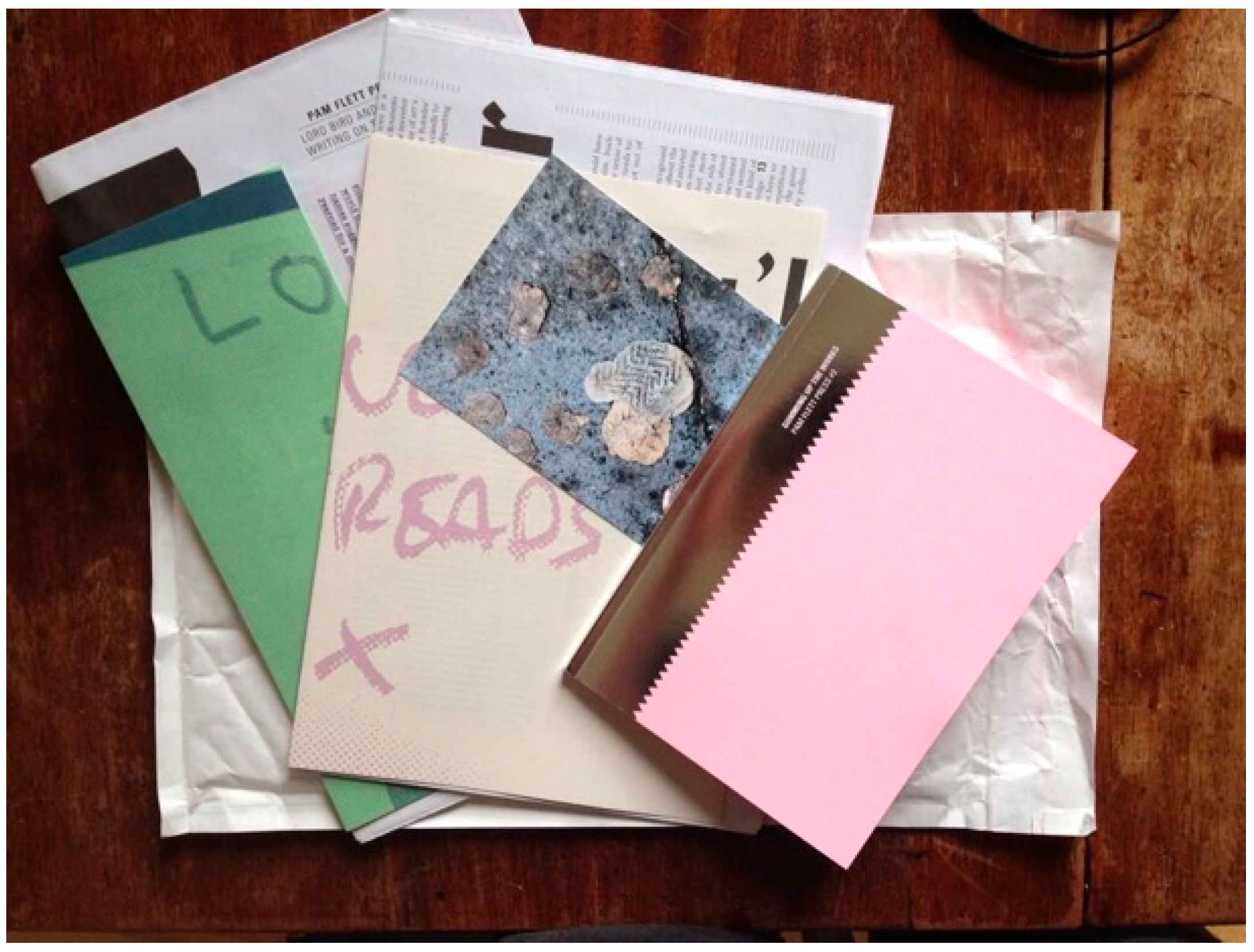 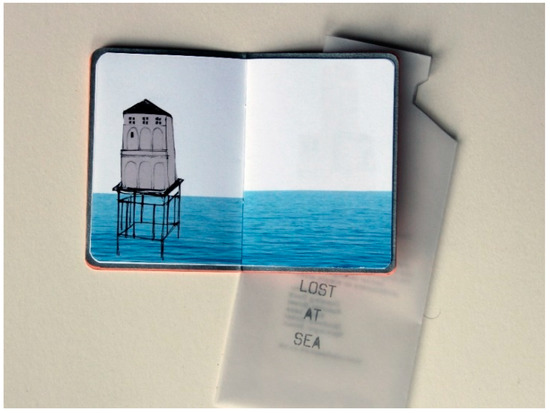 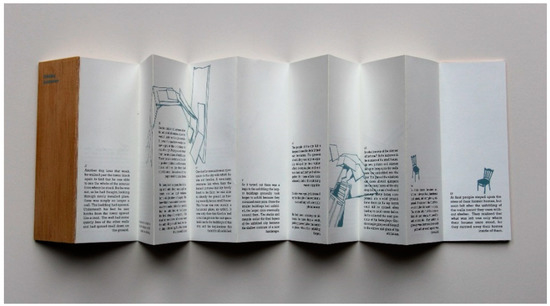 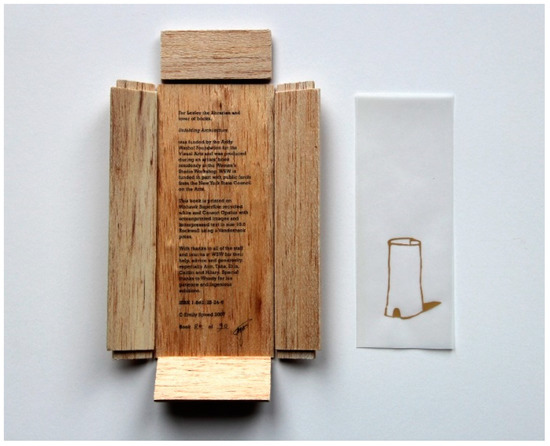 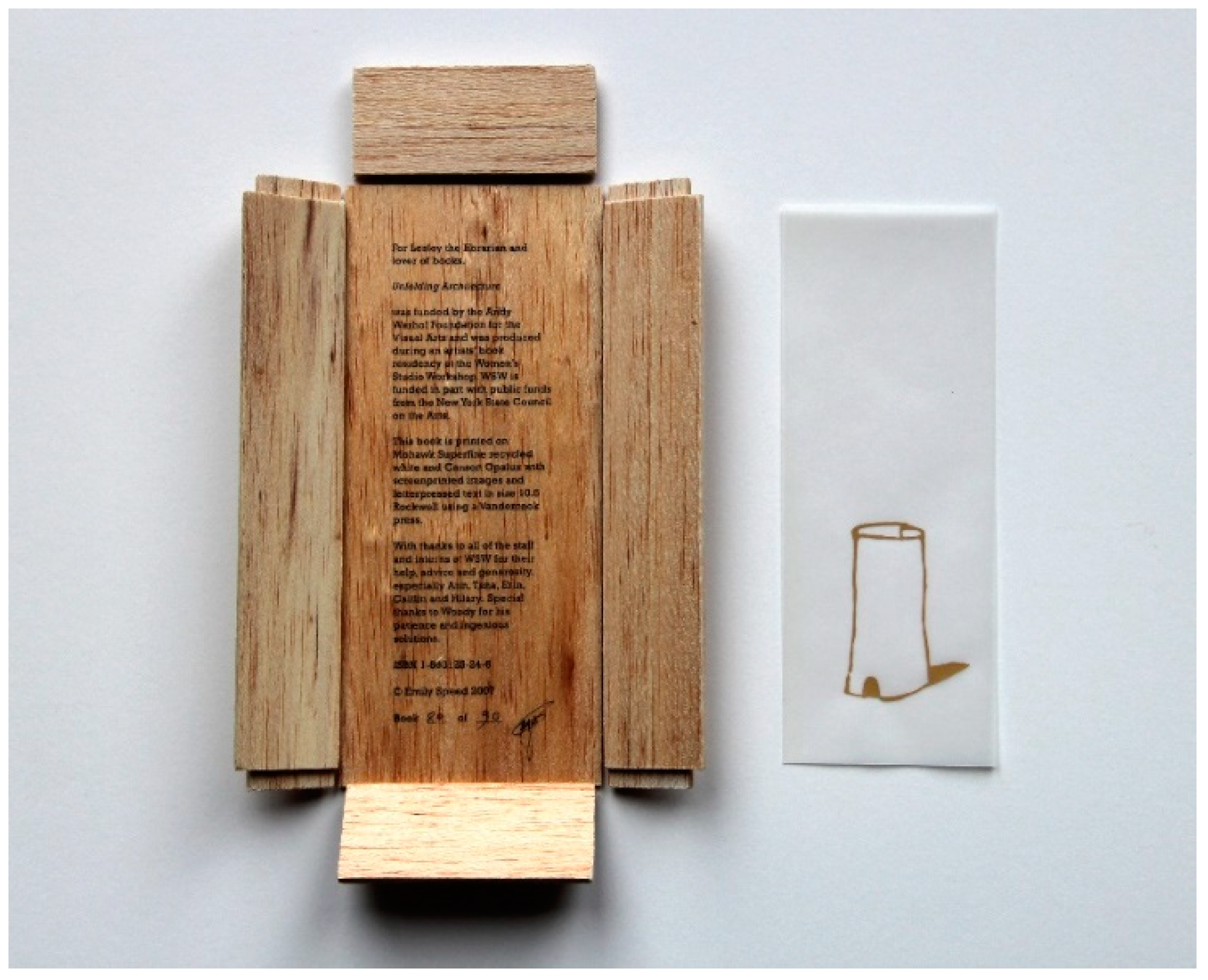 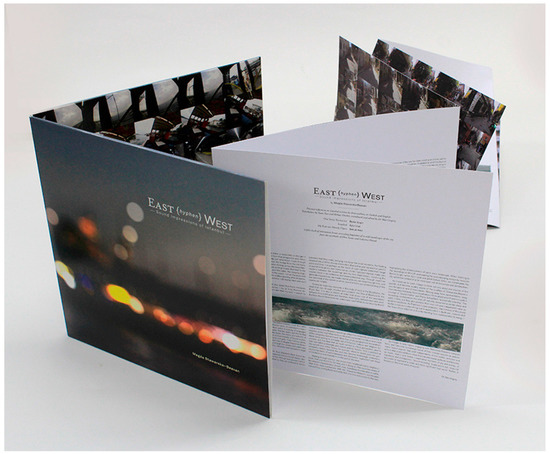 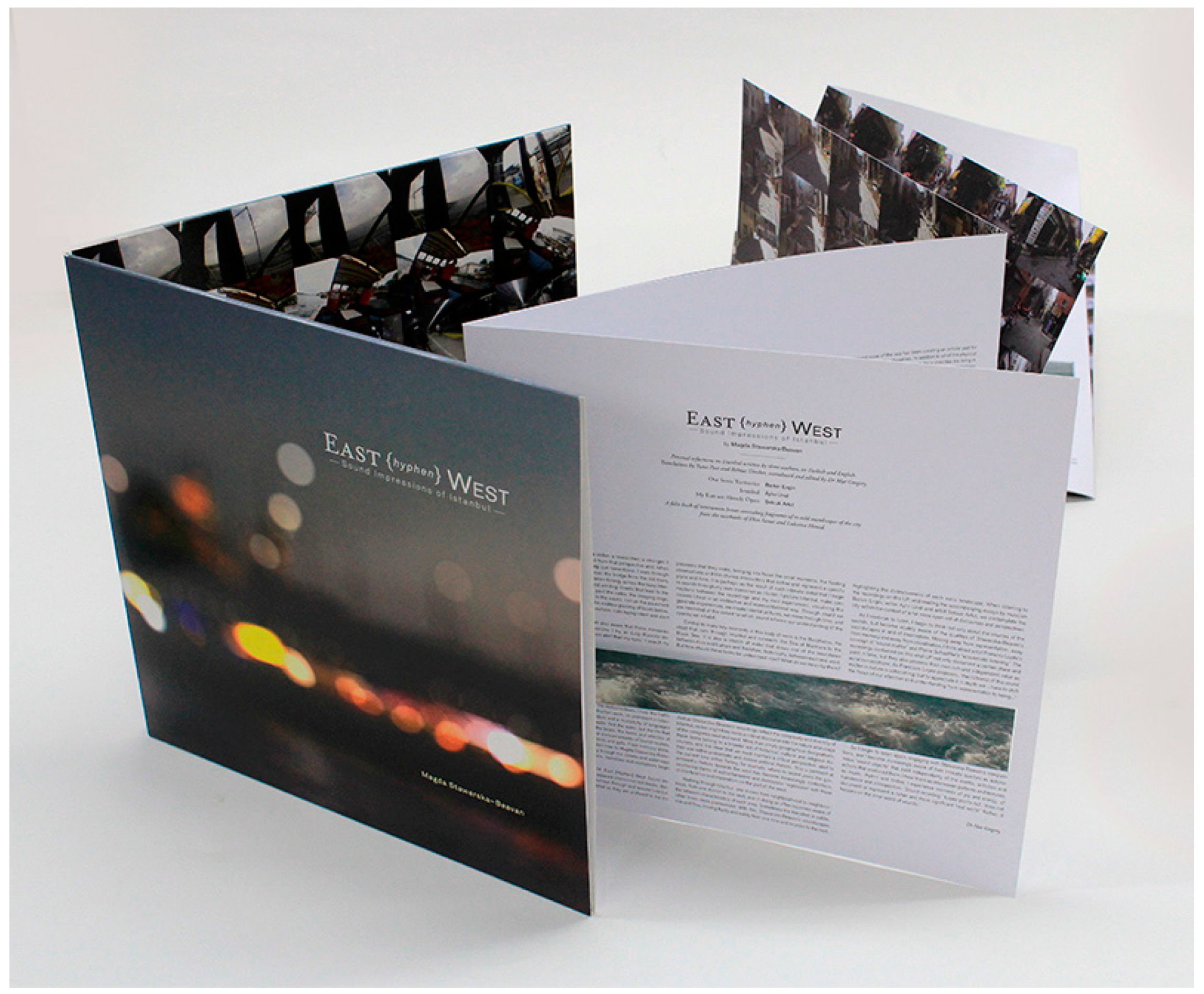