In recent decades, art historians have stressed the benefits of analysing medieval images and their contents within their specific context and, in particular, have underlined the importance of their visual impact on contemporary beholders to determine their functions and specific meanings. In other words, in the analysis of a medieval image, it has become fundamental to verify where it was collocated and whom it was aimed at, and which practical reasons it was made for (its visibility, fruition, and usability). As a result, new perspectives have been opened, creating an active historiographical debate about one of the most fascinating and studied iconographic themes of the Middle Ages: the royal divine coronation. Hence, there has been a complete rethinking of the function and meaning of this iconographic theme. For instance, the divine coronation of the king might not symbolically allude to his earthly power but to the devotional hope of receiving the crown of eternal life in the afterworld. Moreover, in the specific case of some Ottonian and Salian illuminations, historiographers have proposed that their function was not only celebrative (a manifesto of the political ideologies that legitimized power), but also liturgical and religious. This paper places this topic in a historiographical framework and provides some preliminary methodological considerations in order to stimulate new research. View Full-Text
Keywords: royal divine coronation; royal iconography; royal sacrality; power-religion relationship; medieval kingship royal divine coronation; royal iconography; royal sacrality; power-religion relationship; medieval kingship
►▼ Show Figures 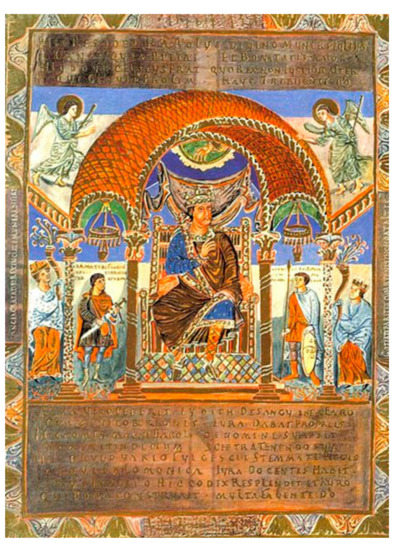