Time and Mobility in Photographs of the Northeast Industrial Landscape

Mapping the Sea on Scotland’s Peripheries

This paper examines the use of mapping methodologies in some recent examples of contemporary art that chart the layered seascapes of the remote coastlines on North West Scotland as seen through the lens of visual culture in the Anthropocene. The art projects interrogate conflicting perspectives on landscape and nature in the North. The case studies demonstrate, both directly and indirectly, the political and cultural tensions made evident by the mapping of the micro and macro undercurrents at work in the region, and examine how mapping has been used as a methodology to visualise those intractable material relationships, often using the map as a trope to do so. These mappings make visible the enmeshments of these remote locations into a global ecosystem. The concept of the Anthropocene provides a useful framework to describe the contemporary context of climate change, ecological decline, biodiversity loss and recent discourses on land use within which the artworks by two artists, Julia Barton and Stephen Hurrel, will be discussed. The significance of Kester’s concept of Littoral Art were explored through the eponymous art project by Barton, which maps the human debris brought by the northern sea currents to the shores of the Western and Northern coasts, and Stephen Hurrel’s cultural mapping of the island of Barra on the West Coast. These projects were further considered in the context of Timothy Morton and Tim Ingold’s meshwork theory and the concept of the 19th century Scottish town planner and environmentalist Patrick Geddes, whose urging to ‘think global, act local’ is implicit in the multi-layered understanding of the Anthropocene. View Full-Text
Keywords: mapping; cultural ecosystems; peripheries; the North; Scotland; the sea; Anthropocene; creative geographies; critical cartographies; experimental geographies mapping; cultural ecosystems; peripheries; the North; Scotland; the sea; Anthropocene; creative geographies; critical cartographies; experimental geographies
►▼ Show Figures 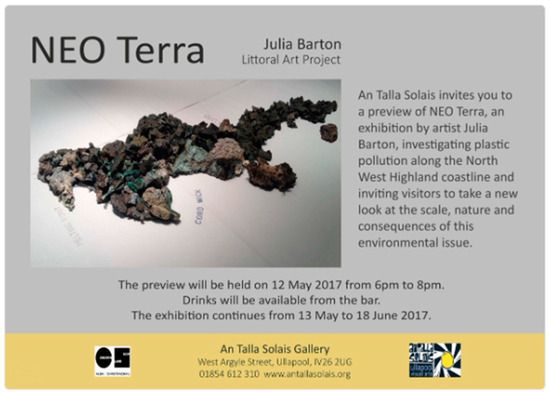